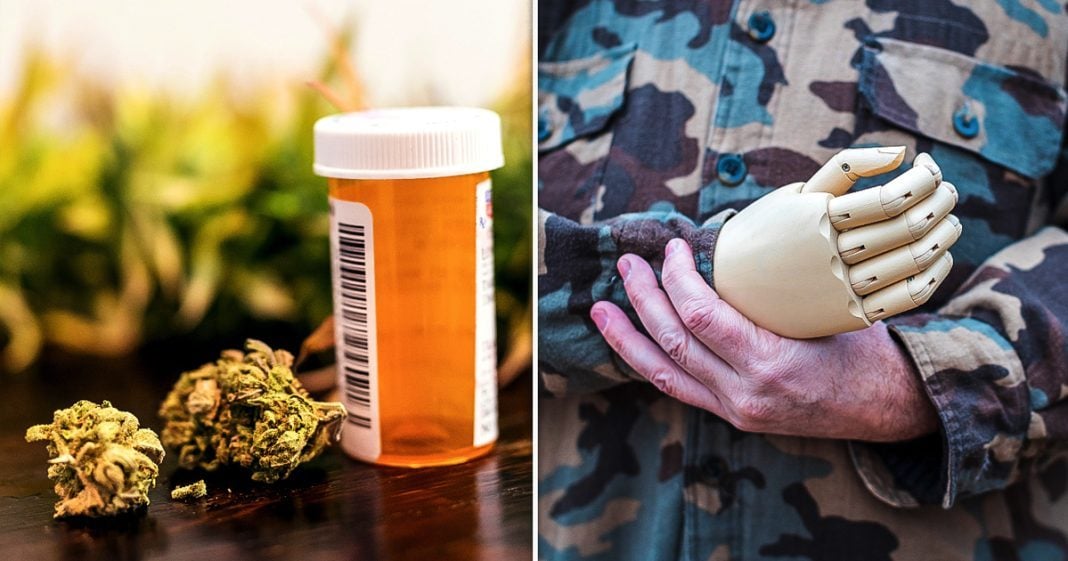 A new study has found that states that legalize marijuana have seen a dramatic drop in prescription drug abuse among their residents. Mike Papantonio & Farron Cousins discuss more. Plus, Victims of terrorism have been trying to hold banks accountable for laundering terrorist money, but the US government doesn’t want that to happen. Attorney Chris Paulos joins Mike Papantonio to explain what’s happening.

Click here to find out more about terrorism lawsuits.

A new study has found that states that legalized marijuana have seen a dramatic drop in prescription sales of drugs. Wow. Well, we’ve done this story before. We, we, the it’s been the, it’s been the drug industry that has fought desperately to keep legalized marijuana out of there. I mean, they’ve, they spent billions of dollars trying to prevent the legalization of marijuana. This story kind of tells the story, doesn’t it?

Farron Cousins:       It does. And, you know, we, we’ve, everybody knows that, okay, when you have the legalized marijuana and even the medical marijuana, you reduce prescriptions for pain medications. Well, this massive study said, listen, it’s not just pain medications, it’s sleep medications. It’s depression medication, you know, psychosis, seizures, which you and I have talked about. It is a broad spectrum of different pharmaceuticals that essentially get taken out of the equation when people can, can go this route.

Mike Papantonio:   Full disclosure, you know, this story, but I feel like I have to disclose it. We, we helped, we helped Charlotte’s Web get started. We invested a lot of money into Charlotte’s Web and Charlotte’s Web was something that was designed, we got drawn into it because children who had epilepsy, they were having 50 grand mal seizures a week were reduced to zero because of the, because of the Charlotte’s Web product that we came out with. That then led to legalization of marijuana in the state of Florida and it’s of course it’s caught on all over the country. But it’s interesting. We, we used to talk about, well, the only people that are beating, beating this down is the drug industry. And now we see why, huh?

Farron Cousins:       Well, exactly. And, you know, there was actually a survey that came out towards the end of last year, a nationwide massive survey. Do you support legalization of marijuana? Not just medical, but all marijuana. 91% of the American public as a whole said, yeah, I support that. So there, I mean, there’s literally no other issue in this country that is more uniting for left and right and center than legalizing marijuana.

Mike Papantonio:   Not for Biden though.

Farron Cousins:       Right. Republicans want it, Democrats want it. Everybody wants it.

Mike Papantonio:   Well, all they have to do, all the feds have to do is they have to open up the banking business to where people can run this just like they would any other business and I don’t see that happening with this administration.

Mike Papantonio:             Victims of terrorism have been trying to hold banks accountable for laundering terrorists money, but the US government, the DOJ, DOD, well they, they don’t want that to happen. Attorney Chris Paulos joins me now to talk about what’s happening here. Chris, this to me, is an, is an extraordinary story. I mean, we know that the banks washed money for terrorists. We have, they, they admitted it. They, you know, HSBC said, yeah, we did it. They signed a huge document where they admitted every bit of it. And now your case is to say they knew they were washing money for terrorists. We knew, we knew contractors were being killed. Soldiers were being killed. And the banks should not get away with that. You would think the Department of Justice and the Department of Defense maybe would help you with that. Just the opposite is true with this administration, isn’t it?

Chris Paulos:                        That’s right. Just recently, the Supreme Court of the United States asked the United States government, the solicitor general to basically give its perspective on a case that’s, it’s considering taking up on an appeal and reviewing. And the government has now filed a brief saying that this case is not appropriate for the Supreme Court to review and that lower courts have interpreted a new law called JASTA appropriately, when in fact that’s not at all the case. Courts have been applying an older standard and this new law was passed in 2016, over Obama’s veto. So, frankly to see the Biden administration come in and, and kind of take a swipe at this law that was, you know, a big loss for the administration that he was a part of at the time, I, I guess, should come as no surprise. But the fact is, is that these cases against these banks are, as you point out, incredibly strong. We’ve got banks that have admitted to this conduct. And now we have plaintiffs who have been injured by it, trying to seek redress in the courts and.

Mike Papantonio:             We’re talking about thousands of contractors. I remember when Obama and Biden, when, when JASTA came out, it was to say, look, we can’t let the banks get away with this. Okay. They can’t just give money to criminals knowing that the criminals are gonna kill US soldiers and US contractors, and just say that’s okay. So law was passed, JASTA. You were very involved in that whole process. And then, and then the Obama administration Biden was vice president, tried to veto that and they, the veto was overridden. But now this is another shot that this administration through Biden is taking at soldiers. That’s what this is. This is just a complete shot at soldiers saying, you may not recover knowing that we know where the money came from. We know it was washed, but you can’t recover from that. That’s exactly what this comes down to, isn’t it?

Chris Paulos:                        Absolutely. And, and one, one of the things that makes this such a stinging position for the administration to take is that the DOJ itself has tried to prosecute or deferred prosecution of these banks and levied fines on them, which essentially are a slap on the wrist. The, the fines were abysmally low, considering the conduct and the effect that it had. And basically didn’t stop the banks from, from, from their conduct.

Mike Papantonio:             They’re still doing it. And so, so in order, the, the fine you’re talking about was nothing. It was during Eric Holder and Loretta Lynch had a chance to really punish these people for criminal activity. They agreed that they were criminals. Let’s, let’s be very clear. They agreed, yes, we’re criminals. Yes, we’ve done criminal conduct that cost the lives of American soldiers and US contractors and the administration when that started was Obama and they said, well, we’re not gonna throw you in jail. We’re not even gonna do, we’re not even going to do a criminal investigation. We’re gonna let you pay a $1.6 billion fine. And they made tens of billions of dollars and the 1.6 billion was the cost of doing business. Did I get that right?

Chris Paulos:                        Pretty much. I mean, that’s essentially what, what happened. And none of that money is reserved for, for victims or for any of the folks who have brought these lawsuits alleging that the bank’s conduct facilitated the attacks against them.

Mike Papantonio:             What drives Biden to favor the banks over American soldiers?

Chris Paulos:                        Well, I think it’s clear that, you know, banks have as much money as anybody in the world and that the money in politics is, is really driving a lot of these decisions or these positions. You know, the things like Citizens United, where money is the essentially the biggest mouthpiece that, that corporations have been handed to, to affect policy changes. And that’s, it’s rearing its ugly head in decisions like this by the administration.

Mike Papantonio:             Okay. So there’s no, just to be clear. There’s no guesswork here. You can say money got to the bank through this terrorist organization on day one. You then have people that followed the money all the way down to the I E D that blew up someplace in the, on the globe. I mean, is it, did, is that correct?

Mike Papantonio:             So they make the decision, yeah, we’re, give us your, give us your political campaign money banks and we’re gonna forgive the fact that you have killed tens of thousands of, of, of US soldiers, soldiers really from all over the globe, not just US. You’ve killed tens of thousands of soldiers. They want their day in court to at least go after the folks that paid for that terrorism. They should have that right. But the Biden administration says, no, they actually file with the Supreme Court saying it’s really a bad idea to let these soldiers recover. That’s basically what they’re saying.

Mike Papantonio:             Well, you know, it’s interesting. While, while you’re here, you’re also handling bank, a case right here in Pensacola, where we know that the Saudi government was involved in the terrorist that killed soldiers right here at the Pensacola NAS. We’re not even getting help from the DOD on that, are we?

Chris Paulos:                        No, the Biden administration actually was an impede, an impediment to our efforts there. They, I, I’ve been on your show before. We’ve talked about how they’ve slow rolled the service of process issues there and they’ve been essentially codling the Saudi regime and not been assisting us at all in getting documents or helping us prosecute that case.

Mike Papantonio:             Why has this case not been reported in, in, in, in, in regular media? I mean, corporate media. The only place you see this is in specialized media. Corporate media’s not picking it up because they advertise for banks. Isn’t that kind of the problem here?

Chris Paulos:                        I think that’s what we’re seeing as well. Is this just the influence that these institutions have because of how much money they have and, and the, you know, the advertising dollars and the campaign dollars that they’re willing to spend.

Mike Papantonio:             I mean, you know, Saudi Arabia, they’re supposed to be our buddy, even though they engineered and pulled off 9/11 and killed 3000 Americans. They’re still our pal. Why? Not because it’s right, but because of money and, and we, we haven’t had a president that has shown any courage, any courage where it comes to Saudi Arabia. And now we have a president, we’ve had two presidents in a row that have shown no courage where it comes to these terrorist organizations that believe it’s a good idea to wash money in American banks, European banks, and then convert that into IEDs. Basically, that’s how that works, isn’t it?

Mike Papantonio:             That’s all for this week, but you can follow all these segments available right here in the coming week, right here on this channel. And you can follow us on Twitter @americaslawyer. I’m Mike Papantonio and this has been America’s Lawyer where every week we tell you stories that corporate media won’t tell you because their advertisers won’t let ’em or their political affiliations don’t allow for it. We’ll see you next time.