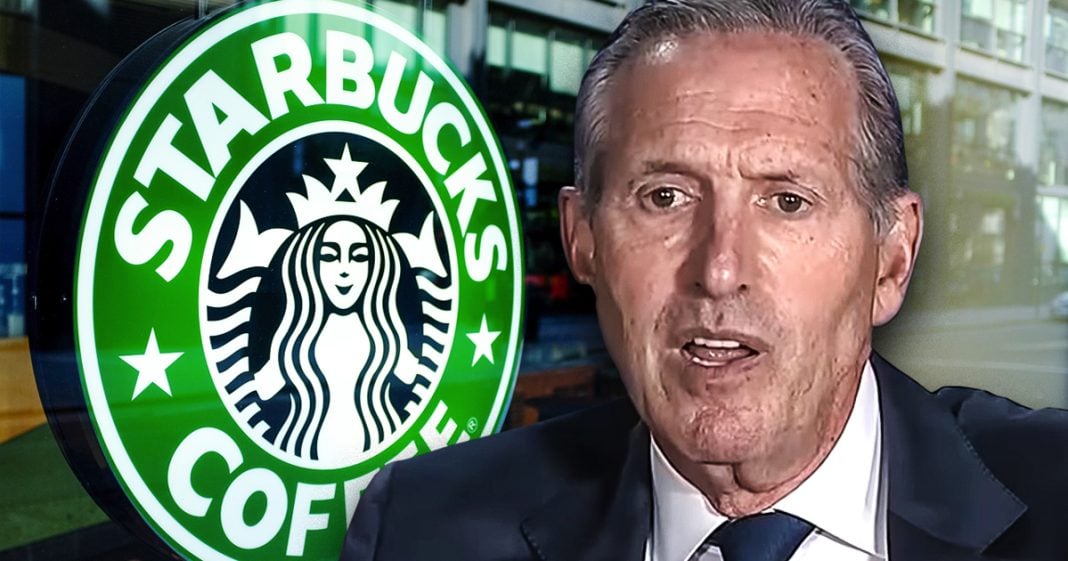 Starbuck CEO Howard Schultz gained an extra ONE BILLION DOLLARS during the pandemic, and now he’s fighting union efforts at his stores. Attorney Michael Bixby, filing in for Mike Papantonio this week, is joined by Farron Cousins to discuss more.

Michael Bixby:                    Starbucks CEO Howard Schultz gained an extra $1 billion, with a B, during the pandemic and now he’s fighting union efforts at his stores. Now we might categorize this story here Farron, under things that are not shocking. Tell us about what happened here with Starbucks new CEO.

Farron Cousins:                  Right. So Schultz, you know, he’s been the CEO of Starbucks for many years, and then he left. He said, I’m taking a step back. I’m gonna be kind of just behind the scenes guy. But then during the pandemic, obviously still owning most of the company, he gets a billion dollars, but they also saw something else happen. They saw people working under these horrendous conditions finally band together and said we deserve better. So there’s been a huge unionization push at Starbucks stores across the country and they’ve been wildly successful. So then the current, or I guess former now Starbucks management came back and said, Howard, you gotta come back and help us here. So he says, all right, I’ll come back and I’ll tell you what, I’m gonna be paid a dollar a year. That’s my yearly salary.

Farron Cousins:                  A dollar. And he starts busting up all these stores, ignoring the fact that he got again, close to a billion dollars in just the last 12 months and acting like he’s the hero. I only get paid a dollar. I don’t know what you’re talking about folks. It’s disgusting. He’s closing stores. They’re firing union workers. They, they’ve accused one store of actually kidnapping a manager because they all confronted him about their union efforts. And so Starbucks said, no, you kidnapped him. It’s, it’s crazy what Howard Schultz is doing here. But that’s why he was brought back. He has the power. He has the money.

Michael Bixby:                    And, and that’s what, that’s what’s been noted. That that’s one of the things that he was noted for is that, hey, he has the ability. He’s been very successful in fighting off these unions. I, I feel like though, this is the sort of the end of a Scooby-Doo episode, right? Where, you know, you pull the mask off and hey, who was, who was conducting all these efforts? Who is part of this strategy? And it’s like, this is the most unshocking thing in the history of the world, of course, this is exactly what it is. But if you look at the complaints and you see what they are, I mean, they range from, from very significant to minor. But you see a pattern here, right? When you see them offering these stores and, and not offering other stores, essentially punishing the people who’ve chosen to unionize. When you see they’ve got hundreds right now, I think it’s over 200 complaints that have been issued about basically violations related to these union type activities. So this is not like, oh, there’s one bad apple. What, what this reveals to me is a con, coordinated effort. I mean, does that raise bigger concerns for you overall with what, what they’re, what they’re doing here?

Farron Cousins:                  Oh, I think absolutely. And they know, like you’re saying, they know exactly what they’re doing. They’re pitting stores basically against each other and they’re saying, oh, this non-union store, we’re gonna come in, everybody gets a $5 an hour raise. But you union store, eh, because you’re union, you have to negotiate with us and oh boy, that’s gonna be a couple of months in the courtroom. So we’re gonna go ahead and give these people raises and benefits, which are not $5 an hour. They’re paltry, small raises. But they’re trying to make the union people and send the message out to the non-union stores that, look how generous we are over here. You don’t want to have to get involved in all these fights and negotiations and, oh, that’s a hassle, but that’s what they’re doing. And that’s again, super small part of it. And we are seeing stores just completely close down because they voted to unionize.