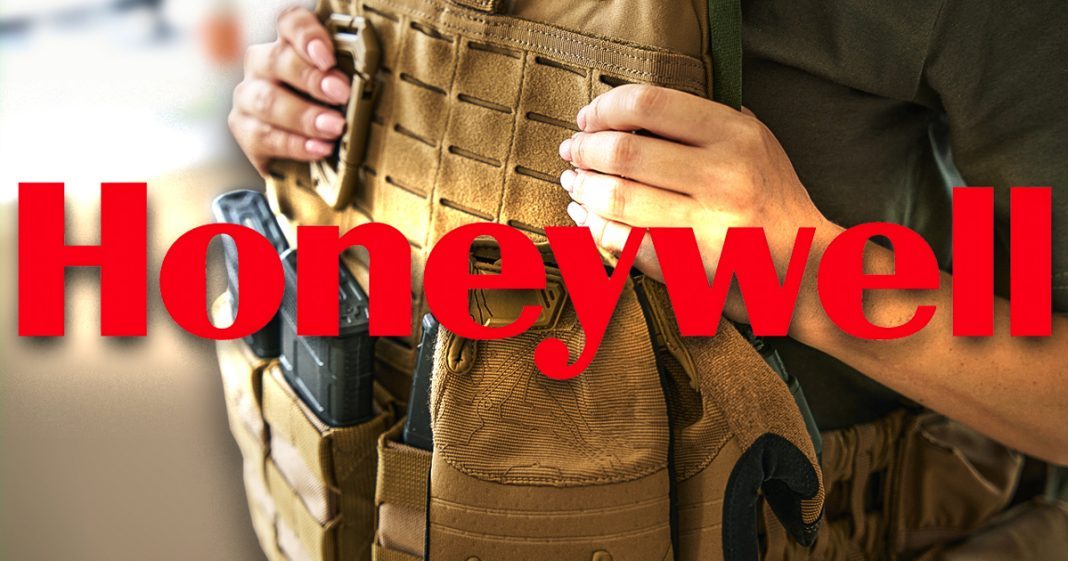 A major military contractor provided faulty bullet proof vests to the military – but they get to avoid a large penalty thanks to a very odd legal loophole. Attorney Michael Bixby, filing in for Mike Papantonio this week, is joined by Farron Cousins to discuss more.

Michael Bixby:                    A major military contractor provided faulty bulletproof vests to the military, but they got to avoid a large penalty thanks to a very odd legal loophole. Ring of Fire’s Farron Cousins joins me to talk about what’s happening along with many other issues. Farron, thanks for joining me here.

Michael Bixby:                    So, what we have here is, is Honeywell. They manufactured faulty product that was supposed to be used to protect our military and they don’t have to pay anything. What on earth is happening here?

Farron Cousins:                  Right. This is a very weird story because obviously Honeywell is one of the top military contractors in this country and they’re making bulletproof vests, let’s prevent US troops from getting killed. But there is a long line of different companies in involved in the production of these bulletproof vests and Honeywell was just one piece of it, basically. So when it became revealed that, uh-oh, all of our tests showed that these things would fail under high heat, the material would degrade. It basically wouldn’t stop bullets if it got hot and, and it stayed that way, not just while it was hot, it would totally degrade the material and they knew it. So they get hit with a false claims act from the Department of Justice said, you knew you gave us faulty materials. We’re gonna fine all of these companies along the way. And Honeywell said, well, hold up though. There’s a little piece of this law that says if you’ve already fined these guys, I can actually subtract that from what I owe and now I don’t have to pay. And that’s you, you know, way more about the law than I do. I’m just trying to distill it down to it’s basics, but it’s, it’s ridiculous that they’re like, well, these guys already paid the fee, so I’m good to go.

Michael Bixby:                    That’s exactly right. And so you’re talking about the pro tanto legal rule, which basically is a contribution rule that says, hey, if they’ve already paid for the value of the damage that’s been occurred, these other people in line, these other companies, these other two or three, or however many other people are involved, if they’ve already paid, we don’t have to pay. And here’s the thing about this that to me, is just, I think is absurd in my opinion, is that look at when was this case first filed, 2008, George W. Bush was president when this case was filed. And what, what’s, what happened here, qui, it’s a qui tam false claims act. It’s fraud on the government. So they’re selling a knowingly defective product and they’re basically saying, well, the damages aren’t that much. I think the whole idea is crazy here. Something that’s being used for a military people. It’s, it’s bulletproof vests. Are there people who died as a result of this? And they’re wanting to limit their damages to just a few million dollars here. I think the loss of the deterrent effect, I mean, you think about this is that basically what this does is motivates companies. You say you get sued in 2008, it’s like, let’s just hold ’em off. Let’s delay this thing for 14 years. And as long as these other companies or somebody else gets bled out and they get taken care of, we’re not responsible at all. They get completely off the hook.

Farron Cousins:                  Right. And, and right now I think Honeywell is facing some civil lawsuits. So there’s at least some kind of damage that people suffered due to the defectiveness. But the civil suits, what I read $500,000. I mean, half a million dollars is what they might end up paying when they should have had to pay 35 million just to the government.

Farron Cousins:                  Before the civil suits. And like you said, we don’t necessarily know right now if people did die from the defects, clearly there were some injuries. But this is terrible, right? You put on that vest, you’re over there serving in the military.

Farron Cousins:                  You expect this is going to do something to protect me. I mean, that saved my life completely, but I am more protected with this. And Honeywell knew along with these other companies here, that it wasn’t true. Their own documents like, concealed testing data is what they call it in the DOJ filing. They concealed it, they covered it up. And that’s pretty much what we see, whether it’s the pharmaceutical industry or these military contractors, coverups across the board.

Michael Bixby:                    Right, and what you’re gonna see from this is people champing at the bit to say, this is fantastic. Are you kidding me? We, this aids the strategy of minimizing liability, minimizing responsibility. This says to the companies that, hey, you know, first of all, a lot of times when you commit fraud, you’re not gonna get caught. I mean, that’s the reality is that most of the time, these people don’t get caught in these cases. And if you do get caught, we’ve got a series of loopholes. You, you can delay, maybe you won’t have to pay. We can minimize what the damages are because somebody else’s responsible. And I think it completely removes the deterrent effect. I think what you’re gonna see is more companies being emboldened by this and, and, and taking further action that just harms consumers, harms people in the military, harms the government and harms everyday people.