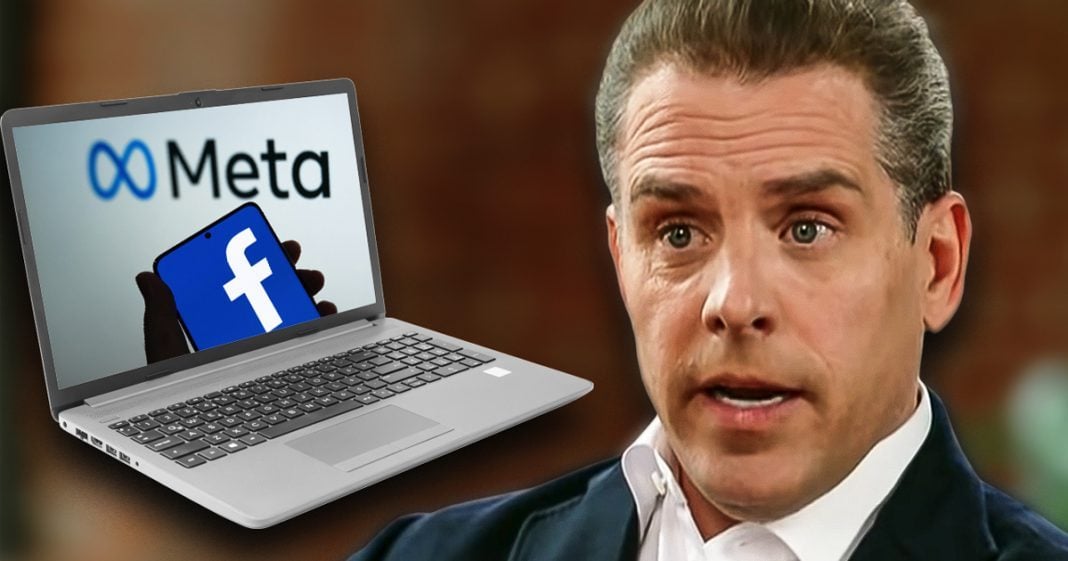 Mike Papantonio:             Mark Zuckerberg admitted recently that Facebook throttled the Hunter Biden lap story ahead of the 2020 election. He says, we throttled it back. He says that, actually, he didn’t really say that in the interview. You and I talked about this.

Mike Papantonio:             If you look at the Rogan interview, I, I think they’ve taken and, and I agree with what you and I had talked about earlier, it’s almost like they’re putting, they’re adding some words to this whole thing, aren’t they?

Farron Cousins:                  So Zuckerberg says, I think the FBI may have reached out to some people. There’s so many vague words in there. And then of course, Rogan asked point blank, did they tell you to, to censor the Hunter Biden story? And he said point blank, no.

Farron Cousins:                  No, they didn’t. But they still did make the decision to throttle that particular story. He admits that freely.

Mike Papantonio:             They throttled it back. They said, look, we got, you know, there’s, there’s an edge of a warning here. Somebody is saying that the Russians are coming again and the Russians are gonna put all this propaganda out there. Now here’s what’s developing to me. I, I don’t know whether you’re following this. I think we talked about it earlier. This Timothy Thibault. Now I think this is, this is a big part of the story. The Hill reported that he was the guy that was in charge of the Hunter Biden investigation. And he was the guy that, that made the decisions. Do we go forward? Do we do this? Do we follow the investigation? What do we do? He, he was escorted out of the FBI building a couple of weeks ago. Okay. Now he had been on suspension before then for investigating him to say, did you really do what the media is saying, some media is saying that you did? That you interfered with social media so you could cover up the Hunter Biden story. What’s your, what is your take.

Farron Cousins:                  Republican Senator Chuck Grassley is basically the one who lobbed all these allegations against Thibault. And they did investigate, suspended while investigating, not suspended, I guess, because there was definite wrongdoing, but saying, because you’re being investigated for these allegations, we need you to step aside. And then of course he quits, retires, you know, differing stories everywhere about why he actually left.

Farron Cousins:                  But, okay, so he’s gone now. This guy who was running it, he obviously didn’t kill the investigation because it was still happening.

Farron Cousins:                  But, I guess the question is, was there damage done? Did you intentionally sabotage anything? Which is a legit question.

Mike Papantonio:             Take, take, take the election out of it. Okay. Take the Trump election and Hunter Biden and people say, well, if we’d have known the story, we wouldn’t have voted for Biden. First of all, I don’t think any of this ties up directly to Biden.

Mike Papantonio:             So let’s assume that Hunter Biden is the, the dirtbag that he is. He is a total utter dirtbag. No question about it. But how does that tie up to the president? And I don’t think anybody, nobody’s come forward and said, yeah, this is where it’s very clear. What, what the big problem here is the FBI. The FBI has been so tarnished. I mean, not, not just from this, but for four or five stories before this they’ve been tarnished. I don’t think they’re ultimately, I don’t think they’re gonna be tarnished by the raid that, or that took place down at Mar-a-Lago. I just don’t think that’s gonna be a problem for ’em. But right now they are, they know that they are having to fight this image problem. People are saying, this is starting to look like J. Edgar Hoover’s FBI. That’s when the Republicans were in charge of saying to the FBI, go investigate this person, go after this person’s tax issues, go invest. The Republicans were driving the train. The, the FBI was politically a machine for the GOP. Now the question is, has the FBI become a machine for, for the Democrats? I, to me, it kills the FBI if this comes out, if this continues to unfold the way it seems to be unfolding. What’s your take?

Farron Cousins:                  Which could be why Thibault, you know, retired, you know, maybe he, it wasn’t a voluntary decision. Maybe it was, you need to get outta here. We’ve gotta maintain this reputation. We’ve gotta make sure everything is on the level. We clearly have a lot of other things going on as well.

Farron Cousins:                  And if there is any kind of blemish on this investigation, it’s gonna put blemishes on everything else we’re doing. So maybe they forced him out. Again, we, we don’t know, we’re not inside there. But for him to abruptly say, okay, I’m officially retiring right now. You’re handling this massive investigation. It’s bad optics to say the least.

Mike Papantonio:             Yeah, it’s bad optics. And you know what happened when the GOP was involved with, with J. Edgar Hoover and Hoover was a weapon. That’s all he was.

Mike Papantonio:             He was a little, you know, little weapon that they would send out against their political foes. Now they, and then, and the Democrats moved during the Church hearings and all that process, they moved to start cutting back the funds of the FBI. I, I predict the same thing’s gonna happen here. There’s already cries, defund the FBI. I don’t believe that’s gonna happen, but I think they’re gonna have a hard time getting big funding.

Farron Cousins:                  Well, you know, and I do think when we talk about this Hunter Biden story, because, you know, you mentioned the guy being a scumbag and that’s based on all the photos and everything we’ve seen off the laptop, but when it comes right down to actual criminal activity here, we’re still lacking a lot of evidence. You know, he did some weird things in those pictures.

Mike Papantonio:             It’s the appearance, what they would say the appearance of impropriety. But I mean, the guy is a dirtbag. I mean, but he’s a dirtbag that I don’t believe at this point has committed any criminal offense that ties back to his dad.

Mike Papantonio:             And that’s the importance of the story. I mean, I don’t care that, you know, the guy’s a dirtbag. There are plenty of dirtbags around.

Joe Rogan:                             How do you guys handle things when they’re a big news item that’s controversial? Like there was a lot of attention on Twitter during the election because of the Hunter Biden laptop story. The New York Post.

Mark Zuckerberg:              So we took a different path than Twitter. Um, I mean basically the background here is the FBI, I think basically came to us, some, some folks on our team and was like, hey, um, just so you know, like you should be on high alert. There was the, we, we thought that there was a lot of Russian propaganda in the 2016 election. We have it on notice that basically there’s about to be some kind of dump of, of um, uh, that’s similar to that. So just be vigilant. So our protocol is different from Twitters. What Twitter did is they said you can’t share this at all. Um, we didn’t do that. What we do is we have, um, if something is reported to us as potentially, um, misinformation, important misinformation, we, we also do this third party fact checking program because we don’t wanna be deciding what’s true and false. And for the, I think it was five or seven days when it was basically being, um, being determined, whether it was false, um, the distribution on Facebook was decreased, but people were still allowed to share it. So you could still share it. You could still consume it. Um.

Mark Zuckerberg:              It basically the ranking and newsfeed was a little bit less. So fewer people saw it than would’ve otherwise. So it definitely.

Mark Zuckerberg:              I, I don’t know off the top of my head, but it’s, it’s, it’s meaningful. But I mean, but basically a um, a lot of people were still able to share it. We got a lot of complaints that that was the case. Um, you know, obviously this is a hyper political issue. So depending on what side of the political spectrum, you either think we didn’t censor it enough or censored it way too much, but.

Mark Zuckerberg:              But we weren’t sort of as black and white about it as, as Twitter, we just kind of thought, hey look, if, if the FBI, which, you know, I still view as a legitimate institution in this country, it’s a very professional law enforcement. They come to us and tell us that we need to be on guard about something then I wanna take that seriously.