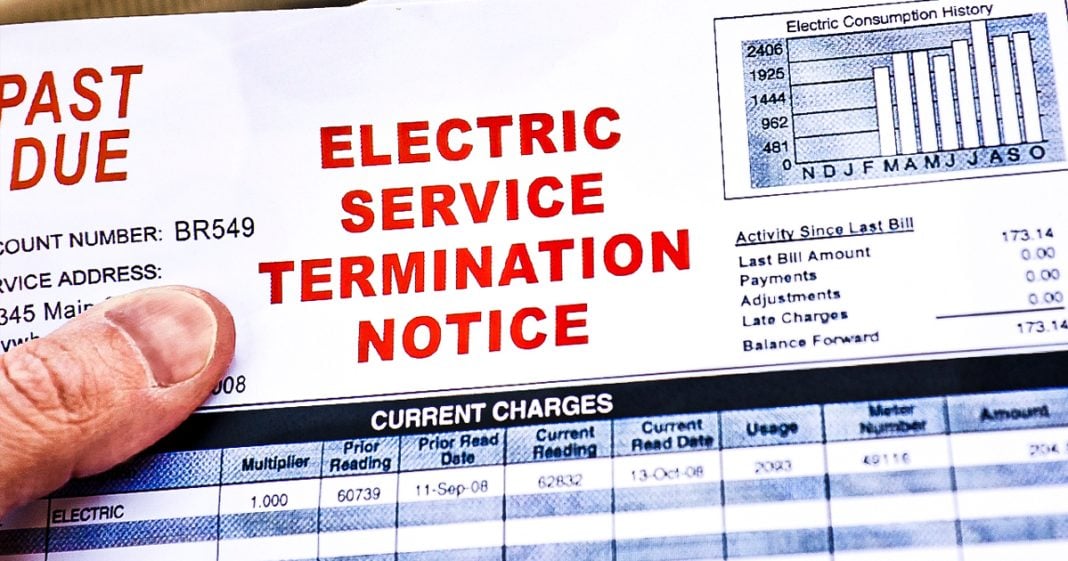 Mike Papantonio:             Rising energy costs have put 20 million Americans at risk of losing electricity because they can’t pay their bills. Now again, just like the story we just talked about, what’s happening? Used to be that you would have small individual energy companies, you would have a co-ops. Maybe you’d have a co-op that’s run by a county or a city. And everybody in that area would, would get their energy from that co-op. And then you had people like Xcel Energy, NextEra energy. We know what thugs they are. And we know all these people, PG&E.

Mike Papantonio:             Those, those types of, those types of corporate control types came in and have bought the industry. So now you’ve got what, 20 million households, one in six homes that are as much as $3,000 behind in their ability to pay their electricity. And they’re simply being shutoff.

Farron Cousins:                  You know, we have seen already this summer where you have had areas that have experienced these power outages due to grid failures and people have died from heatstroke. We saw at this past winter, when the power grids went out, people lost their electricity and froze to death in their homes.

Farron Cousins:                  And now we’re creating a system where the energy grid doesn’t have to fail because so many people are behind on their bills, they’re gonna lose electricity, that people will die from this. We see this up north every year, every year for a couple of decades now, elderly people, they couldn’t pay their bills. So they let their gas bill expire and they go without heat and they die by freezing in their own home.

Mike Papantonio:             Well, right now you have, you have the American public they’re maxed out on their credit cards. That’s clear, evidence shows that. There’s, they’ve depleted their savings just because of things like inflation. And their wage gains have really been erased because of inflation. But so, so in comes corporate America. Anytime you let corporate America in that door, whether it’s the hospital corporation, name it, when you let corporations make decisions like this, it, it’s gonna end badly. And this is exactly what’s happening here. You’ve got people that, that they, natural gas for example, I think I saw a number where it was, it’s increased 40% just over this last year. So Europe is getting killed by it. America’s getting ready to really feel it this winter.

Farron Cousins:                  Well, and there’s no shortage by the way, let’s point that out with these artificial price inflations. We don’t have a shortage of coal. We’re still drilling that out of the ground at record pace. Fracking is taking place all over the country. We’re getting more natural gas than we know what to do with.

Farron Cousins:                  So much that they wanna ship it overseas. We have enough energy. They’re inflating these prices for the one simple reason because they can.

Mike Papantonio:             Yeah. And as long as we let corporations continue, it’s just, we, we’ve seen it. I mean, his, history has repeated itself thousand times, my God, the railroad industry, the, the fuel industry, you name it. We’ve seen it repeat itself. The banking industry. I could go on forever. Now, now they’re even trying to overtake the, the, the legal industry. So unless somebody says, we, like a Bernie Sanders type says, look, let’s go to the heart of the problem. You can dress this up any way that you want. But at the end of the day, it’s corporations that are hammering the rights of the American consumer. That’s what’s happening. Farron, thank you. As usual, great material.

Mike Papantonio:             That’s all for this week, but all of these segments are gonna be available this coming week, right here on this channel. And you can follow us on Twitter @AmericasLawyer. I’m Mike Papantonio and this has been America’s Lawyer where every week we tell you the stories that corporate media is afraid to tell you. They can’t tell you because their advertisers won’t let ’em or their political connections are just so deep rooted that their political connections don’t allow for it. We’ll see you next time.