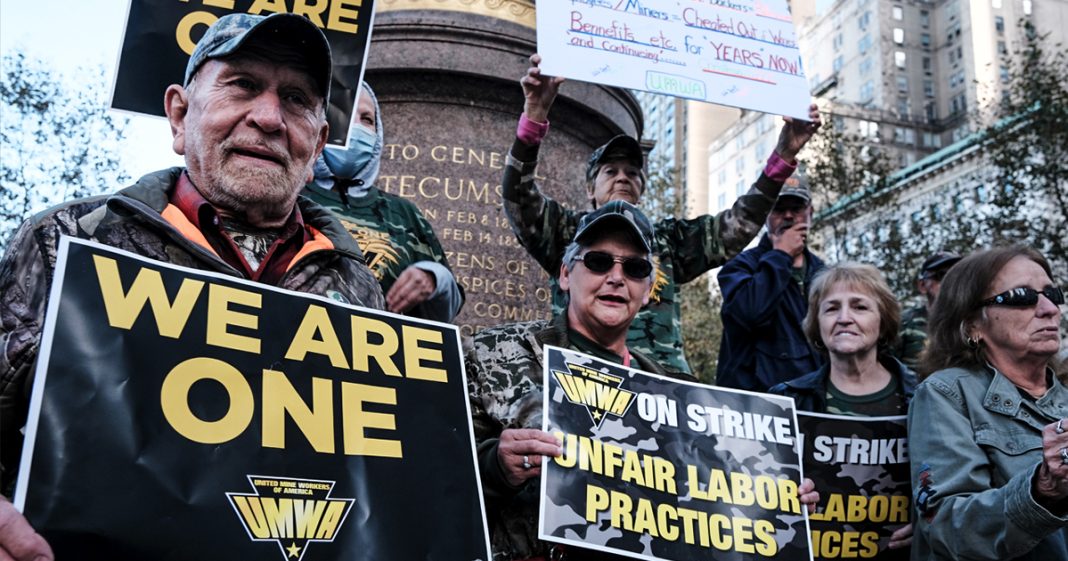 Mike Papantonio:             The National Labor Relations Board has fined Alabama coal workers millions of dollars for going on strike and demanding better working conditions. Wow. You know, when I, when you, you found this story and when you sent it to me, I said, really? Is this, is this true? Because I went back and looked at a second source. They, they fined the, the people who were saying you’re killing us. The works, the work conditions aren’t safe. You’re overworking us. You’re putting it, putting us at health risk. For them to have done that, the union to have done that, they fined each one of the people working and, and that were demonstrating about this, $13,000, $13 million is what the, is what Biden’s NLRB, Biden’s NLRB, he’s making the appointments here. They said, you have to pay $13 million for going on strike.

Farron Cousins:                  Right. You have to pay Warrior Met Coal because they had to get the buses and bring in the scabs. They had to pay for extra security because you’re out there picketing them. So they are recouping the costs, again, from Biden’s NLRB to Warrior Met Coal that made, what is it, $146 million the first three months of this year.

Mike Papantonio:             Let, let me put in this perspective. Let me slow down on this story just a little bit. You pointed out that the, the, the NLRB and I’m calling it Biden, you can get up.

Mike Papantonio:             Viewers can get upset. It is his NLRB. He’s made the last appointments. So they said that, you know, it’s not fair to the company that, oh, by the way, made $146 million in profits within a period of six months. Okay. $146 million. But the company says, well, golly, oh, by the way, they paid the CEO $5.7 million during the, $5.7 million during the same period of time. They said, oh, but these, this is such a, you’ve lost production for this company. You’ve got, we’ve had to pay for guards and we’ve had to pay for cameras because of your strike. We’ve had to pay for buses to move in the scabs to take your job. But this NLRB, which is supposed to be Biden is there to make America great again. Really? That was Trump wasn’t it? Make America great again.

Farron Cousins:                  But what’s even more discussing is when you look back at this story, a couple years ago, Warrior Met Coal had to file for bankruptcy.

Farron Cousins:                  And these miners in order to keep their jobs, they collectively said, listen, we don’t want the company to go under because we like our jobs. Even though you’re horrible to us. We all agree to a $6 an hour pay cut across the board.

Farron Cousins:                  And that’s why they struck. Because again, they’re making millions of dollars, the CEO gets paid millions. They just want what they had given up given back.

Mike Papantonio:             While this is going on, this CEO is being paid $5.7 million. The company’s making, making a hundred, almost $150 million from January to March. And this NL, NLR. Well, let me, let me ask you this. Do you really think that Biden even knows this? Is he even.

Mike Papantonio:             Is he in charge anymore? See, because when I see a study like this, I say he, he, he literally does not know what’s going on in his own government. That’s the scary part of this story. Somebody, industry’s gotten to him, has gotten to the NLRB and they said, hey, can you help us out? Can you fine this comp, can you find these, these union folks, $13 million for what they’ve done? Biden, you know, he has no clue, he has no clue what’s going on.

Farron Cousins:                  Meanwhile, Bernie Sanders has been out there on picket lines in two different states twice this week.

Mike Papantonio:             Yeah. Bernie Sanders is up front on this and saying how, why, what’s wrong with this story? And he’s the one having to ask the question, the guy that really should have been president.