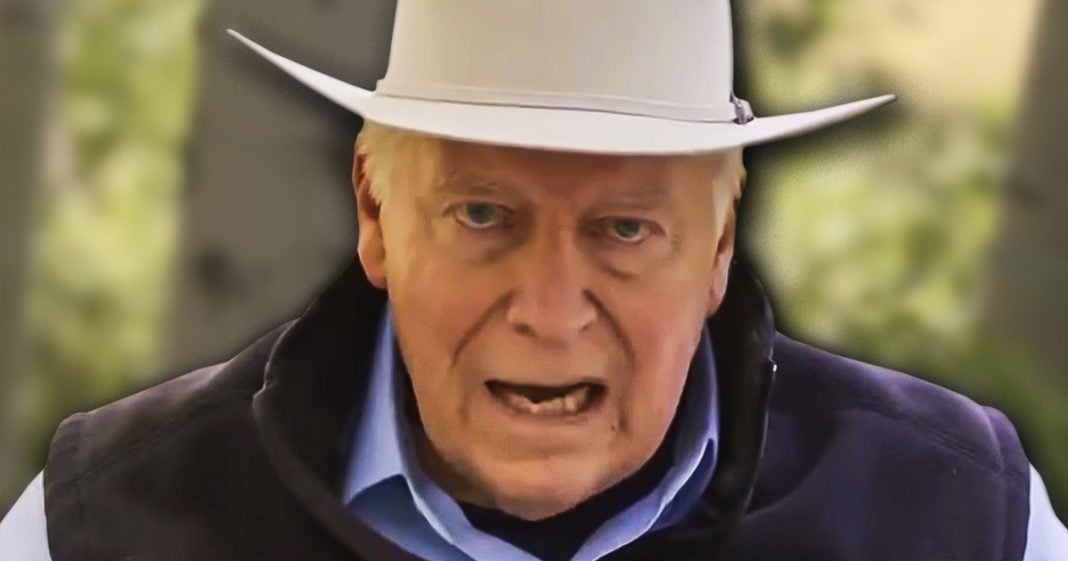 Dick Cheney is getting a political makeover by his former critics, all because he also doesn’t like Donald Trump. Mike Papantonio & Farron Cousins discuss more.

Mike Papantonio:             Dick Cheney’s getting a political makeover for his former critics all because he, because they don’t like Donald Trump. This story, okay. Let me, let me put into perspective. This is a man who was, he, he was actually regarded by all the media as Darth Vader, because he was responsible for the big lie that killed a million people in Iraq. He drove that train. He created all the subterfuge that allowed us to go into Iraq. And, you know, he controlled the media even. You think back on Iraq, think about CNN and Fox and they’ve got these big maps on the floor. And Dick Cheney says this and Dick Cheney. Dick Cheney was the guy most responsible for the Iraq disaster. Now he is the hero, he is absolutely the hero of the Democrats. These people who’ve said, my God, he’s awful. Well, apparently not.

Farron Cousins:                  Yeah. You know, he came out recently, obviously did this ad for his daughter, Liz Cheney, trashing Donald Trump and saying, you know, oh, we’re gonna keep him from ever getting in office again. Please go vote for my daughter. Who also please forget the fact that she sold out her own gay sister.

Mike Papantonio:             Well, that’s, that’s an important story because that tells you who this woman is. Talk about that a little bit. I wanna spend a little time on this story.

Farron Cousins:                  Yeah. They basically, you know, Dick Cheney has one daughter that, that is a lesbian and the rest of the family has kind of just pushed her aside, pretending you don’t exist.

Farron Cousins:                  And, and even Dick Cheney’s horribleness goes, you know, way further back than Iraq, with Iran Contra. He was in the Nixon administration and all the while from Nixon until he left office, his whole idea was let’s expand the power that the president has.

Mike Papantonio:             Right. If you expand the power of the president, we can pick a war wherever we want. We’re not gonna have Congress getting in our way. And you know, Halliburton connection, how many billions and billions and hundreds of billions of dollars did Iraq, did, did Halliburton make an Iraq? Well, who was in charge of that?

Farron Cousins:                  So there really is no daylight between any of these people. But the funny thing is, you know, talking about the rehabilitation of this guy. Back in January when he shows up at Congress for the one year anniversary of January 6th, he gets a standing ovation.

Farron Cousins:                  Well, you get there because all you have to do is come out and say, hey, I hate Donald Trump too. He’s a really bad guy. So I am your best friend. Forget about all those pictures from Abu Ghraib. Forget about GITMO.

Mike Papantonio:             Oh, by the way, he invented Abu Ghraib. I mean, he’s the guy who made Abu Ghraib happen because of what you said. He said, the president has the ability to do that. We don’t need Congress. This guy is a war pig. And you know, the other part of the story, people don’t know the Dick here. Well, the Dick in the, in 2000 election, he was the guy who was tapped to go find a vice president. Well, it just so happens, he appointed himself as that person, the vice president, because his relationship with Halliburton. He knew he was gonna make a ton of money if he could just start another war that cost us a million lives and God knows how much money.

Farron Cousins:                  All of these other individual, I mean George W. Bush. Oh, well he was so cute handing Michelle Obama a piece of candy at Trump’s inauguration. We love him now. He couldn’t figure out how to put on his raincoat. So he’s a hilarious.

Farron Cousins:                  He just painting his beautiful pictures. His approval rating is back up into the seventies.

Mike Papantonio:             The same thing that happened with Avenatti. You’ve done story after story on Avenatti. Dems, I love this guy. Well, okay. You know, he was caught stealing money from clients to the tens of thousands, actually millions of dollars stealing from clients, but he was the Democratic guy. Then you had Scar, Scaramucci, right?

Farron Cousins:                  Anthony Scaramucci who lasted, you know, the famous 10 days as Donald Trump’s press secretary, you know, was so excited to be there. We’re making America great again. Then he gets fired and says, well, I hate Trump now. And so all of the liberal podcasters say, well, come onto my show and let’s talk about how bad Trump is.

Mike Papantonio:             Okay. Tell, this is another love story that develops with the Democrats because he’s willing to say I hate Trump, so.

Farron Cousins:                  Right. Michael Cohen spends 20 years of his life fixing all of Donald Trump’s legal problems, you know, wanting to live the high life like he sees Trump doing. Taking money here and there. Absolute just scumbag. But then he gets busted and now he says, well, I hate Trump too now. So the liberals, once again say, well, come on over to our side, buddy. You’re our best friend.

Mike Papantonio:             Well, the Dick, he is now the new face of the Democratic party if you believe what you’re seeing. I can’t even believe what I’m seeing. Farron, thanks for joining me. Okay.

Mike Papantonio:             That’s all for this week. But all of these segments are gonna be available the coming week right here on this channel and you can follow us on Twitter @AmericasLawyer. I’m Mike Papantonio and this has been America’s Lawyer, where every week we tell the stories that corporate media won’t tell you because their advertisers won’t let ’em or their political connections don’t allow for it. So we’re gonna see you next week, I hope.