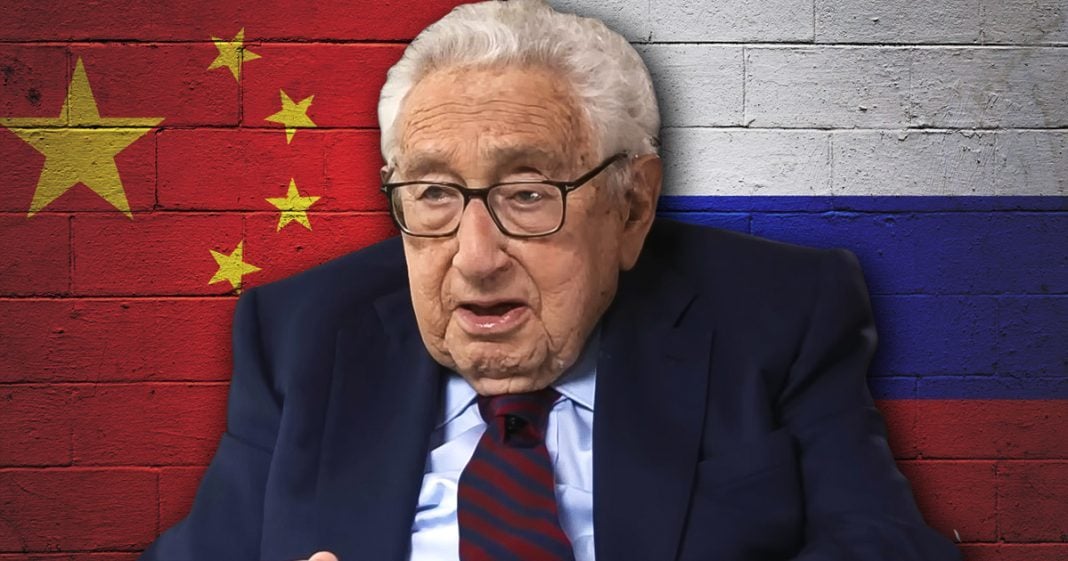 Mike Papantonio:             Even warmongers like Henry Kissinger are expressing real, real serious fears about the USA’s foreign conflict and what the USA. Now, first of all, this guy’s a war criminal.

Mike Papantonio:             There, there’s no way to talk about Henry Kissinger unless you start by saying yes, he’s, he is a war criminal. But he is, it, I mean, I could go down the list, whether it’s the Iran Contra, whether it’s Iraq, he’s, he has his ugly hands on all of it. But he says right now what the Democrats are doing and what the Republicans are doing is they’re rattling the sabers to where, in his opinion, we are inches away from a global conflict with China and Russia. And that’s why there was so much upheaval about Nancy going to Taiwan. Why are we rattling sabers? Why are there people over there right now? You got a bunch of Republicans and Democrats over there right now, rattling sabers with China. Why?

Farron Cousins:                  Yeah. It, it makes absolutely no sense. And of course we’re still sending billions of dollars and, and yes, you know, Ukraine has to be able to protect itself from Russia. But we will have to hit a point where we look at this firmly and say, what, what are we doing? Are, are we escalating war? Are we really gonna have to push this to the point where we put boots on the ground? And thankfully we’re not there yet. But we’re getting close.

Farron Cousins:                  But I wanna point this out too about Kissinger’s statement here, because he’s not wrong. We’re rattling the sabers. That is correct. But this guy loves war.

Farron Cousins:                  And so the difference is now we’re talking about two countries that do have the potential, especially if they join together, to wipe us out.

Farron Cousins:                  You know, he likes to go over to these smaller countries where he knows we, we’ve got the superiority. We can go in and regime change,

Mike Papantonio:             Go, go kill Allende. Go unseat a democratically elected legislature. That was his idea. Put coups out all over the world. That was his idea. And now this war pimp is saying, hey, you know what? I gotta call it what it is. We’re only in Ukraine because the United States and NATO kept pushing the idea that we want Ukraine in NATO. And that made Russia uneasy. These are his words. Now this is a guy who’s observing, who loves a good war.

Mike Papantonio:             But he says, we helped cause the Ukraine conflict. And he’s totally right. You know, you got Putin that’s saying, I don’t want, I don’t want my borders tested like that. But this is a guy who, who right now is, is saying, stop it with China. You guys are looking like a bunch of idiots rattling these sabers. It doesn’t take us anywhere. And yeah, we better own up to we’re partially responsible for what happened in Ukraine.

Farron Cousins:                  Right. And, and, you know, with Russia, I, I do think there’s instances where you could probably make an argument that Russia could maybe pose a threat to the United States. I think with China, that’s even a bigger stretch, you know. China, yeah, we’re, we’re getting beat technologically. We’re sending our jobs over there, but that’s us, not them. But in terms of, are they gonna do something to the United States? No. China is not gonna launch an attack against the United States. Well, six.

Mike Papantonio:             Well Farron, you know what? I, I believe most everything you say, and I hope you’re right about this because I got a lot of, I got a lot of confidence in your opinion. I’m not so sure. And if you wanna take a look there, there’s a, go look at the Project For A New American Century.

Mike Papantonio:             Okay. PNAC, just take a second and Google that and read that this guy was behind it. He’s about expansion. He’s about war. And he’s saying you guys have me freaked out right now, Democrats and Republicans, stop it.