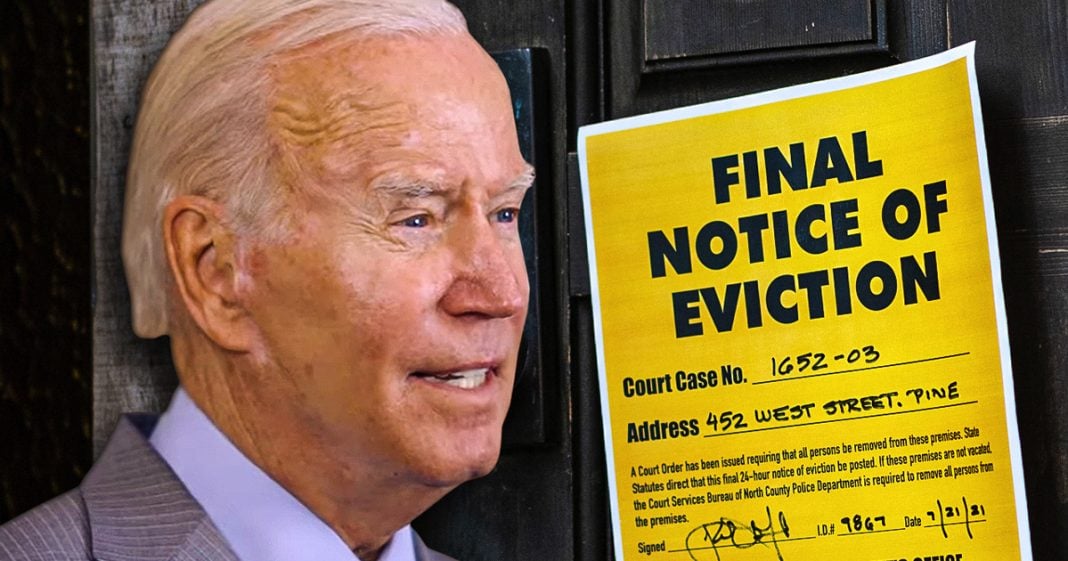 Housing groups are begging the Biden administration to do something about out of control rent prices. Mike Papantonio & Farron Cousins discuss more.

Mike Papantonio:             Housing groups are begging the Biden administration to do something about out of control rent. You know, Farron, the truth is Biden has plenty that he can do, but he’s doing nothing. And he’s doing nothing and people are asking the questions. You have these things right at your fingertips, go do ’em. Take your, gimme your take.

Farron Cousins:                  Yeah. Obviously rent prices, housing prices all across the country, going through the roof post pandemic, even though we’re, we’re not even really post pandemic yet, but anyway, they’re begging Biden do something. The average national rent is now over $2,000 a month. This is unsustainable. Inflation’s still killing people. Gas prices coming down, but still bad. And Biden’s administration, whether it’s through the Federal Trade Commission or the Securities and Exchange Commission, they can unilaterally make moves that are either going to halt the rent increases or hammer them with the SEC to the point where they lose investors and lose money.

Mike Papantonio:             Okay. We did this story a few weeks ago. Unbelievable, the fact that, you know, again, it’s the same thing. We can do a story that affects pocket book issues. Like this is gonna cost you money if you don’t pay attention. The stories people would pay attention to is I hate Trump. I hate Republicans. I hate Democrat. The hate stories. We know that because we’ve been doing this a long time. We did the story and we talked about that Wall Street is going out, buying up huge swaths of houses in neighborhoods. Probably most people watching this program have gotten a call, do you wanna sell your house? Do you have some property that you want to sell? What’s happening there? Explain it.

Farron Cousins:                  Those are the people working for these major corporations, the BlackRocks and all these other investment groups. And what they wanna do is they buy up entire communities, neighborhoods, subdivisions and we’re, again, we’re not talking one or two houses. We’re talking about every house in that area on that block.

Farron Cousins:                  So they can then rent them out, charge more than, of course, it should cost to live there because people have no choice. Housing is the number one expense in this country and you kind of have to have a house

Mike Papantonio:             It’s the highest increase in 35 years. It’s increased $200. The median cost has increased $200 per month, six to 7% increase. The highest that it’s ever been. Evictions are higher than they’ve ever been. You’ve got 50 of the largest cities in the country, the largest cities in the country that they have followed and just in the last year is, it’s gone up now to 200, increased to 200 more than what you’re paying. If you’re paying a thousand, look for 1200, and they’re saying it just continues. And the, the reason Biden is not doing anything because it’s a Wall Street deal. And like it or not, this is a Wall Street president.

Mike Papantonio:             And he has a Wall Street cabinet. And the Wall Streeters are right now trying to buy up as much property as they can to hold renters captive. That’s the simple story there, I think.

Farron Cousins:                  And, and what’s gonna end up happening is we’re gonna end up with a glut in the market once they kick people out, price them outta the market. Then suddenly these bankers who can’t think two months into the future.