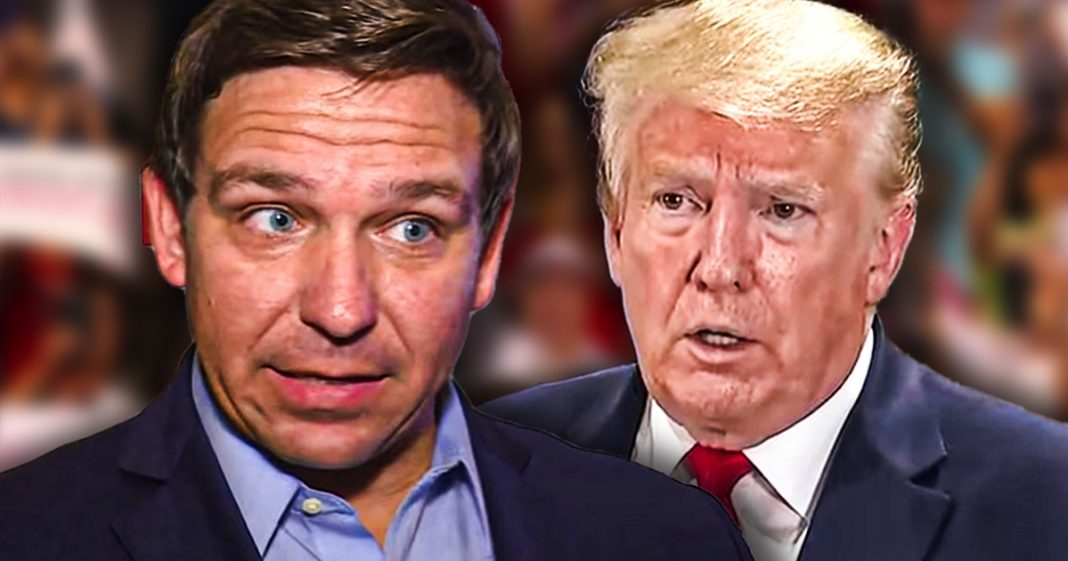 President Biden wants to run against Donald Trump again, but Florida governor Ron DeSantis is the one he needs to be worried about. Mike Papantonio & Farron Cousins discuss more.

Mike Papantonio:             President Biden wants to run against Donald Trump again, but Florida governor Ron DeSantis is the one he needs to be worried about. I don’t know why people are missing this. I don’t think they’re missing it. DeSantis, you know, I, I, here you wanna hear long term prediction? DeSantis versus Newsom out California. Newsom’s gonna take the East Coast and the West Coast. DeSantis is playing to middle America. He has a real chance to win the presidency. I don’t really think that Trump wants to run. I think all along Trump is, if you look at the way they’re interacting, he’s, he’s the guy behind DeSantis. He thinks DeSantis can deliver on a lot of his ideas without being Donald Trump. What do, what’s your take?

Farron Cousins:                  Well, the, the reason DeSantis is obviously a, a scarier opponent than Trump, which is what Democrats are trying to warn Biden. Like, hey, start paying attention to this guy.

Farron Cousins:                  DeSantis, even though I disagree, by the way, with all of his, you know, legislation he’s pushed, he doesn’t have any scandals. You know, bad legislation is one thing, but there are no scandals involving this guy. There are no skeletons in the closet that we know of right now. And he’s not stupid.

Mike Papantonio:             I think the guy’s smart. He’s strategic. He’s deliberate. I think he poses the biggest threat to the Democrats. I think in a, in a lineup between him and Newsom, he wins because you’ve got this, this angst that everybody has about the whole California scene, you know, that it’s just, it’s a problem that Newsom brings with him. I think Newsom would be good politician. I think he’s gonna run a good campaign. And I think it’s gonna be him when it’s all over. It’s gonna be a tough fight. But you know what they don’t understand, Florida is firmly a red state.

Mike Papantonio:             And you have Newsom doing these ads in Florida as if it’s gonna change voter’s idea about the difference between Newsom and DeSantis. I, I don’t think.

Farron Cousins:                  He’s about to go to Arizona, New Mexico, Pennsylvania, and Ohio to campaign and hold rallies for Republicans.

Farron Cousins:                  So if he can go to these places where you’ve got some Trump backed candidates, because everybody is endorsing or rallying for Trump backed people, if he does well and he plays well on those stages, again, these are swing states he’s going to.

The FBI carried out a raid on Donald Trump’s resident at South Florida golf course resort this week. And everyone on both sides of the political aisle have lost their minds about this event. Here, here are the arguments, you know, they, they’ve weaponized the DOJ, probably some truth to that. That it’s going to cause such a surge in GOP interest for the midterms that anything the Democrats gain with the abortion issue is now lost because you have so many Republicans, even moderate Republicans, very angry, willing to show up at the polls. So, so take it from there. I see a boatload of issues here, but we can talk about this a long time. Why, why don’t you take it from there.

Farron Cousins:                  I, I, I don’t disagree that there are obviously some political ramifications the Democrats are gonna suffer from here, but I’m, I’m personally glad that this happened.

Farron Cousins:                  And, and I do think I, I wanna throw this out there is, I don’t think, you know, everybody says this is, oh, it’s the National Archives, the documents that he had had there. I don’t think that that is exactly what we’re looking at.

Farron Cousins:                  I think it’s more likely this has something to do, because again, we don’t even have confirmation about what it’s really about.

Mike Papantonio:             Well, Okay. Talk that out a little bit, because a lot of the viewers may not know, talk about that issue.

Farron Cousins:                  So, so this is of course, you know, Trump’s attorneys and as far as we know, Trump himself were attempting to get by the states, send us alternate electors so Mike Pence can verify them.

Farron Cousins:                  That is the one thing we know the DOJ has been investigating. They’ve been very aggressive with it in the last couple weeks.

Farron Cousins:                  So for this to suddenly happen now versus the National Archive story, which came out way earlier this year.

Mike Papantonio:             That’s, that’s a good point. I think you may be onto something there. The way I see this is the, the downside to it. We’ve talked about the Church hearings a lot.

Mike Papantonio:             Okay. This is being shaped up like the same kind of argument that was done in the Church hearings. If you think about it, the Church hearings really started with the idea that maybe the IRS, well, it started, it started with a Phoenix program that a guy named Colby was running in Vietnam where he was assassinating people unnecessarily. And it was an ugly, ugly story. But then the other, the sub part of it began that the IRS they had added all these agents and they were targeting political opponents. It was part of the DOJ process. The DOJ themselves was, they were targeting political opponents. They were doing things like, you know, following journalists around, they were doing things like eavesdropping, bugging houses, bugging cars, and the, so it, it was, it was a really ugly time in history. And I, I think about this, this is being turned into that a little bit. This is being turned into, this is gonna be another example of weaponizing, you hear that term a lot, weaponizing the Department of Justice. You know, I don’t know, but I’ll tell you something, if it does go forward, what we’re gonna see is when the, when the Republicans are gonna take, they’re gonna take over at some point. And when they do the people that outta be really careful are people like Bill Clinton and Hillary Clinton and Hunter Biden. They’re, and you know, the people that were behind this raid themselves, it’s gonna be another, I think it’s gonna be a parallel to the Church hearings.

Farron Cousins:                  Well, and we do have some interesting things here too, because Christopher Wray, the director of the FBI, this guy Trump put up there.

Mike Papantonio:             Well, there’s, they’re already starting to attack him. You know, they’re tying him up to the fact that, of the, his wrongdoing when he represented the people that were involved with Epstein that were raping kids.

Mike Papantonio:             So he, he represented these people, even though he had inside information from a prosecutorial standpoint, he comes out and he starts saying, I’m gonna represent these people that are caught up in the Epstein trafficking issues. He, he represented some people that are accused of trafficking. And so, so they look at it, they look at him and they say, you know, that’s where they’re gonna start their fight. First of all, the magistrate shouldn’t have even issued the subpoena. It, you know, it’s impossible for us to know. We haven’t seen the subpoena. We haven’t seen the search warrant. We know they’ve got into his, his safe.

Mike Papantonio:             And it was empty, you know, and we do know this. We do know that, you know, the people who are constitutional lawyers, really good ones, say that they really got ahead of themselves there. That this is the last possible act the Department of Justice should have taken before they negotiated for these documents.

Farron Cousins:                  This might be the final, you know, nail in whatever coffin it is they think they have. If it is the fake elector scheme, again, they’ve already gotten all of his associates, you know, all of the enablers, the lawyers, their cell phones, if they’re looking for the final missing piece of the puzzle. And another interesting thing that happened too, though, at the same time, right before this happens, we get the major bombshell from Maggie Haberman.

Mike Papantonio:             There’s always already suspicion it doesn’t have anything to do with government. It’s his private. But so, so the point is there’s no turning back here. Okay. This is never been done to a pres, a past president in the history of the country, ever. And so the point being it’s like Axelrod said, they better be sure that this is a tight case. That’s an open and shut case. Because if it’s not, we’ve got a DOJ that’s gonna be on the ropes. We’ve got a FBI that’s gonna be on the ropes for might a long time. I think that’s gonna happen anyway. I think you’re gonna see the, I think you’re gonna see the Republican base in power and they’re gonna turn out in droves, man.

Farron Cousins:                  Well, and Republicans have already told us if we take back the House, guess what? We’re, we’re doing the Hunter Biden investigation.

Mike Papantonio:             Yeah. Which I think is gonna be a disaster for ’em. I mean, Republicans gonna do the same thing that Democrats did and spend too much time investigating and not time enough legislating.

Mike Papantonio:             Yeah. Eric Holder, Eric Holder was a coward. Well, the, I, I think it’s early to say we’ve turned into a banana Republic, but this is something that you see in South America. One pow, one, one political powers in, they’re in power, that they’re then out of power and the investigations and prosecutions start. That is almost, that, that is the, the way that a third world country operates. So I, I think it’s too early to say that right now, although you have people saying banana Republic, third world countries. I don’t know. I think it’s too early. Yeah, we don’t know enough facts at this point.

Mike Papantonio:             You may be right. Let’s hope it’s something that they can actually, because if you’re gonna threaten the king, you better kill the king.