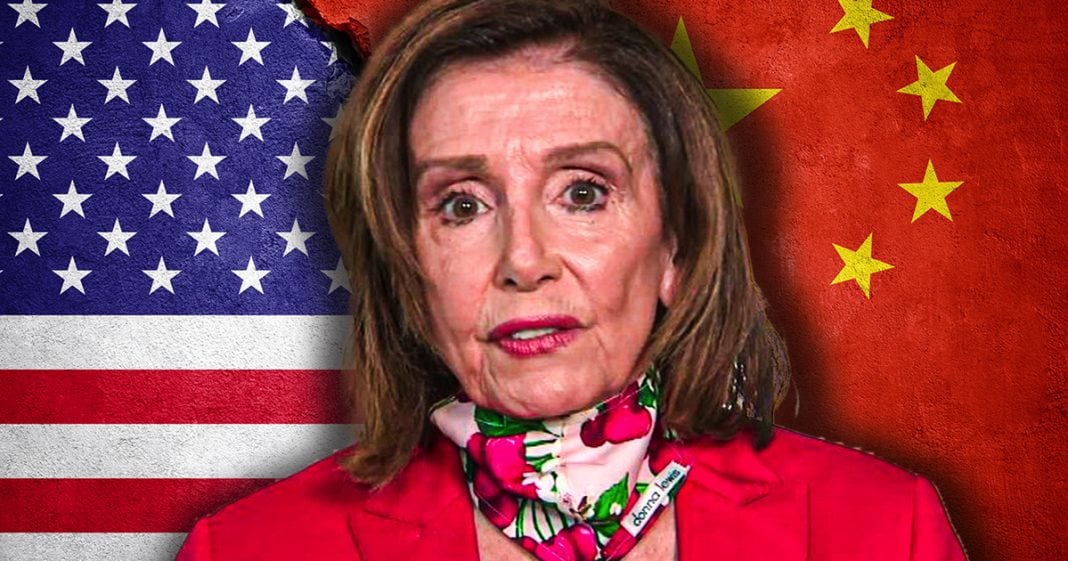 China is cutting ties with the US on many issue following Nancy Pelosi’s visit to Taiwan. Mike Papantonio & Farron Cousins discuss more.

Mike Papantonio:             China is cutting ties with the US on many issues following Nancy Pelosi’s visit to Taiwan. My God, you know, we did a story on it. We just asked the question, Nancy, what in the hell are you doing in Taiwan? What are you really trying to accomplish? And of course, all of her flying monkey friends, you know, oh, she’s, she has the right to go. She can do whatever she wants. We talked about the fact she went over there without a plan. We talked about there’s gonna be ramifications. So she’s, she’s palling around in her pink jumpsuit. I don’t know what she’s accomplishing. But at this point, we’re starting to see an absolute connection to what she did. Pick it up from there.

Farron Cousins:                  Yeah, absolutely. China has now come out and they said, listen, we are no longer working with the United States on the most important issue of the day, climate change. You know, we had been in negotiations with the United States. We had wanted to reduce emissions. The US was gonna do it. And if we cannot get China, the biggest polluter on the planet, to reduce their emissions to just now walk out of talks, because they’re mad at Pelosi, this planet is in serious trouble.

Farron Cousins:                  Because Pelosi decided I want to go to Taiwan during my little vacation break here and it screws us.

Mike Papantonio:             So, so you’ve got, they’ve already began military exercises just right off the coast of Taiwan that they weren’t doing. They’ve already fired missiles above Taiwan. They’ve suspended diplomatic ties. This is all because meddling grandma makes a visit to Taiwan because she wants to make it a statement about how tough she is. And by God China can’t tell me what to do. Really? I mean, and if you wanna support that, you better think it through, because this is a superpower we’re dealing with. This isn’t, this isn’t a third world country. This is superpower.

Mike Papantonio:             They wanted her to go there. You know, oh Nancy, brilliant. You know, what a strong woman you are. And now we’re seeing the ramifications of it. The discussion seems to miss the fact that we owe China more than a trillion dollars, more than a trillion dollars is what we owe China. And when they start calling that in, that’s the next step they make, it, it’s, it’s, it’s I think it’s, they’re the, we owe them more than maybe Japan, but it’s real close. Japan and, and, and, and China. But as I watch this developer, it’s not getting any better. It’s getting worse. And God forbid, we should have brought it up and actually call balls and strikes. How dare you? How dare you go after the Democrats? We’re not Democrat. I’m not a Democrat. I’m not a Republican. I call balls and strikes and I’m gonna continue doing that.

Mike Papantonio:             Better than that, un, just unsubscribe to us. If, if you can’t, if, if a viewer cannot take an intelligent discussion about calling balls and strikes on something as idiotic as this, they need to go listen to Huff post. You know, where everybody agrees with everything all the time. That’s not this site.