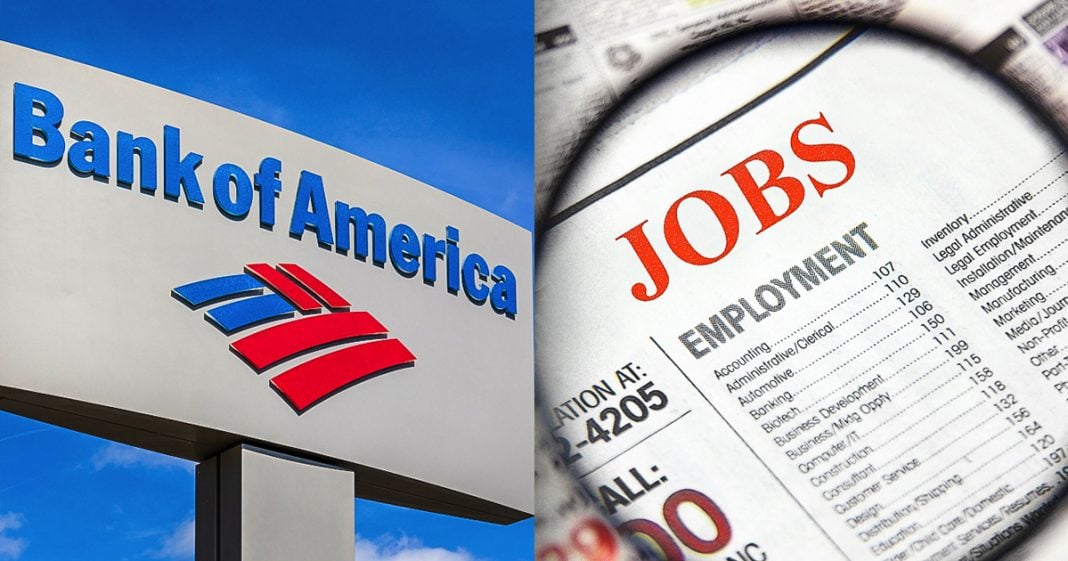 A memo from a Bank of America executive shows that the bank wants MORE people to lose their jobs in the coming year. Mike Papantonio & Farron Cousins discuss more.

Mike Papantonio:             A memo from a Bank of America executive shows that the bank warns that more people need to lose their job. That’s their memo. It’s better if more people lose their job, because then there’s competition. And, and you see, if you have, if, if you, if you have one job and you have five people competing for the one job, who’s that’s better, is better for the Chamber of Commerce, right?

Farron Cousins:                  Yeah. It really is. And, you know, you, you hit it on the head there because what Bank of America wants is five people for every job opening, not one job open, or, or five job openings for every one person.

Farron Cousins:                  Which is what we’re looking at in an economy right now. Not necessarily that ratio, but there’s more job vacancies than job seekers, which means the job seekers can be choosy. They can say, I don’t wanna go work for Bank of America. You pay horrible wages. I’m gonna go work for this other company. So Bank of America loses out. They, they have a position still needs to be filled. So what do they have to do? They have to raise their wages and increase their benefits to attract more people.

Mike Papantonio:             And I, you know, I love the Intercept. I don’t think there’s a better, to me that organization, the reporting there is excellent. And they did another excellent job here and they just got it right. They talked about something, you had to take, you know, economics. We had to study Adam Smith. I had to study Adam Smith. And I, I forgot that what he said until I saw it in this article. But I, I remember this issue coming up in that course. And he says, look, it’s not high wages that are the problem. That’s what he said. Because an economy builds from the bottom up. That if you give people high wages, it improves the, it improves the entire economy, GDP, everything. He said, the problem is high profits. He says, because high profits is where things go wrong.

Farron Cousins:                  Yeah, absolutely. And Bank of America is still making money, hand over fist, as most Wall Street banks are and they want desperation. They want somebody so desperate for a job, because there’s no other options.

Farron Cousins:                  That they’re willing to go and work for these horrendous wages, the horrible conditions, the long hours with no overtime, whatever it is. But we don’t have that right now. And, and even economists these horrible economists that we have in this country are telling us, no, we need more unemployment to help with inflation. No we don’t. We have to get to the heart of it, which is this corporate greed, to address that issue.