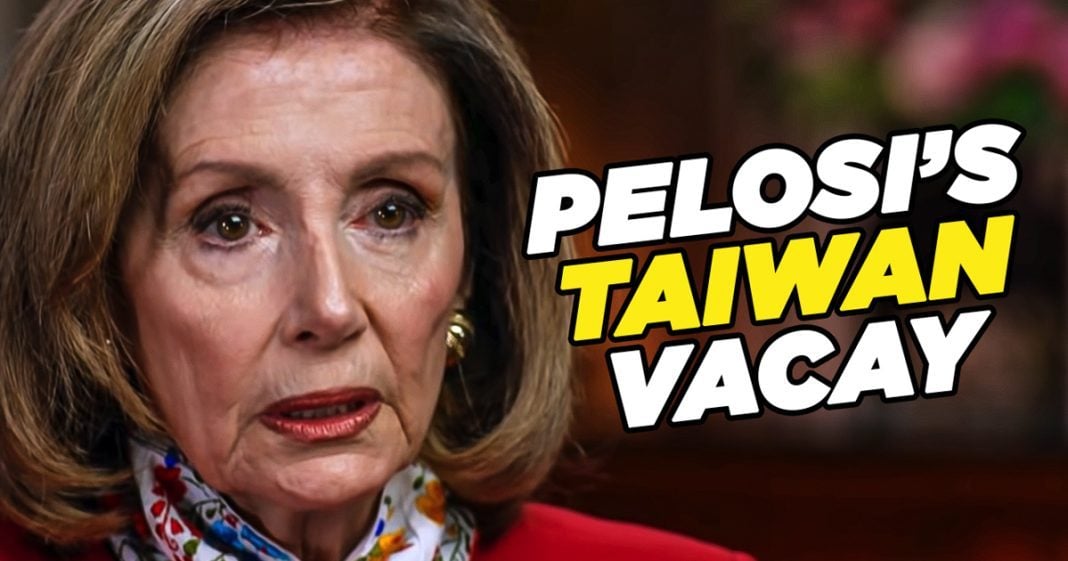 Mike Papantonio:             Nancy Pelosi took her ill-advised trip to Asia this week and all the war hawks, they’re very excited about it. Ring of Fire’s Farron Cousins joins me to talk about it. I don’t know what your take is. I mean, you know, she’s landed. There’s, you know, we’ve got warships, the Ronald Reagan, one of our biggest ships in the, in the sea there. We, we’re taking an entire armada so she can take her trip. This is a crazy story for so many reasons. Give me your take on it.

Farron Cousins:                  It, it is. And you know the footage of right before the plane lands, you’ve got the tanks rolling through the streets in Taiwan.

Farron Cousins:                  But I think there’s something bigger here and it has to do with something you and I have talked about recently, and that is the microchip legislation.

Farron Cousins:                  Taiwan is the world leader in producing semiconductors and microchips. In fact, nearly all of them across the planet are coming from one plant in Taiwan.

Farron Cousins:                  So Nancy Pelosi obviously wants to go there, butter things up, get these semiconductors rolling. And as we all know, Pelosi’s husband just bought a ton of stock in, in semiconductor companies in the United States. So there easily could be a financial benefit to her basically stoking World War III with this trip.

Mike Papantonio:             I love your, I love your takes. I always do. I think you’re right on. Look, here, here’s the, here’s the things that have been suggested as this story develops. Okay. First of all, the war hawk deal, you know. Why, why is Fox news, oh, what a wonderful idea, Nancy go. Every war hawk on CNN and MSNBC, yeah, she has the right to travel if she wants to travel. Nobody ever really talks about the fact, why is she going? I, have you heard a good answer of why she’s going? And, and you suggest one that makes perfect sense, but I haven’t heard anything, any legitimate answer. They, you know, the, the, the weapons pals, her weapons pals who she gets a lot of money for, they’re crazy about this. Show of strength through the midterms. That’s one reason. Cover up for hus, for hubbies, insider trading, cover up for hubbies drunk driving stories. These are, these are all being suggested. So, so as I look at this story, the thing I’ve looked for is for somebody to say, why are you going? Have you had a clear answer on that?

Farron Cousins:                  No. And in fact, just so everybody is aware, like you and I actually, we sat on the phone talking about this story. We’re both looking at different articles, going through multiple, trying to find anybody that can offer an explanation as to why this is even happening. Why right now? It’s not like we need to go over there and work on any kind of diplomacy, you know. So it didn’t make much sense for her to even do this, especially it’s August.

Farron Cousins:                  Everybody else in the House is going back to their districts during the break. They’re gonna be campaigning.

Farron Cousins:                  But she doesn’t have to do that because she’s in a safe district. So she knows, well, I guess this is a great time of year to go, go travel and, you know, freak out the entire planet because of this threat from China.

Mike Papantonio:             And she’s freaking out the UN, okay. The, this statement from the UN. UN warns, one miscalculation and we’re in a nuke annihilation. Now they make that statement the day before she goes, almost like Nancy, you dummy, look, what’s getting ready to happen. What are you really accomplish? First of all, she has no authority to do anything.

Mike Papantonio:             She’s an 82 year old legislator who’s on her way out. And she makes this trip and everybody’s scratching their head. And the only people that seem to love it is Fox news, every war hawk, every GOP war hawk on the planet says, yes, this is a great idea.

Mike Papantonio:             Don’t, yeah. And this delegation of lightweights. I mean, why don’t they just take a trip to Disney World? If she wants a vacation, it’s cheaper. We don’t have to call out the warships. There doesn’t have to be pandemonium all over the globe because of something stupid that she’s liable to say. You, you tell me.