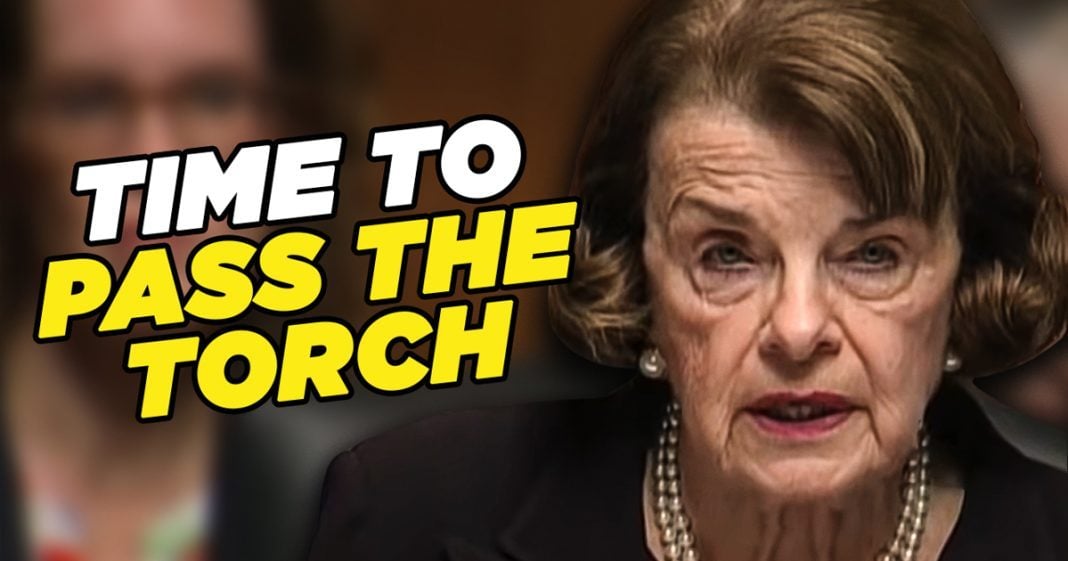 Mike Papantonio:             The Democratic party has a very obvious leader problem. You think? But the aging establishment is refusing to let go. My God, they just have to hang on. The quick, look, here’s the quick news, Biden, 79. Pelosi, 82. A majority whip, our majority whip is, is 81. Durban is 81. He’s, you know, these, it’s like fossil fuel up there right now. It’s Jurassic Park goes to Washington. Give me your take on it.

Farron Cousins:                  Well, look, this is something I’m really glad the media is starting to talk about these issues because you and I have been mentioning this for years now and it is starting to gain traction. You have more and more people coming out talking about the ages of these individuals. Some of it has to do clearly with Biden with his age. That is a huge story out right now. But also I think I gotta give most of this credit to Diane Feinstein, you know, who is gonna be 90.

Mike Papantonio:             Is she still, I mean, if you put a, if you put a mirror under her nose, will it create condensation? That’s what, every time I look at this woman, It think, good God.

Farron Cousins:                  But, but when those stories came out a couple months ago saying she doesn’t recognize people on the hill, like her staffers, she doesn’t know them.

Farron Cousins:                  Her colleagues, she doesn’t recognize them. That kind of kickstarted the conversation a little bit with most normal, you know, non-political news consumers saying, wait a minute, if we have members of Congress that pharmacists have said, yeah, I filled Alzheimer’s prescriptions for them.

Farron Cousins:                  I can’t tell you who, but I have. We have people that have just basically aged out. You know, we, as a society, tend to look at people, you know, whether it’s accurate or not, but once you hit your eighties, we say, okay, well this person, you probably shouldn’t be driving a car. You need help getting around. And yet that’s what we have in, in leadership.

Mike Papantonio:             Watch all of them from Biden to Pelosi, halting speech, constant gaffs. Almost a, a need to take breaks because they’re over, they’re overwhelmed with, with the pressures. But nevertheless, the Democrats, for some reason, ended up with it worse than the Republicans.

Farron Cousins:                  Well, they really did. I mean, you know, the Republicans have been trending younger. They appoint younger justices to the Supreme Court, to the federal courts. They understand that we have to pass the torch to this new generation. These folks on the Democratic side are unwilling to do that.

Mike Papantonio:             Yeah. I, I think of John F. Kennedy, when he came into office, he said the torch has been passed. He was one of the youngest presidents at that point. Torch has been passed. We, we have a new way that we look, out of there came Camelot and the whole notion of Camelot was a new, fresh Democratic party. Politics are fresh again. These folks are hanging on for their life. I guess it’s a good money maker for Pelosi because she’s the insider for insider trading for the old man who’s making a bundle of money. So I, I don’t know. I, I, I, I guess it’s just an economic decision. But why did the Democrats allow it to happen? That’s the problem.

Farron Cousins:                  I don’t, well, you know, what’s important to point out too, is when Kennedy gave that speech, these people were either teenagers or in their early twenties.

Mike Papantonio:             Some of it is. I mean, that’s, that’s the amazing thing. Some Democrats look at it like, oh yeah, this is okay. They have a lot of experience. Thank you for joining me, Farron. Okay.

Mike Papantonio:             That’s all for this week. But all of these segments are gonna be available this coming week right here on this channel. And you can follow us at Twitter @AmericasLawyer. I’m Mike Papantonio and this has been America’s Lawyer where we tell you the stories that corporate media won’t tell you because their advertisers won’t let ’em or their political connections won’t allow for it. The truth is we call balls and strikes. Stay tuned. We’re here every week.