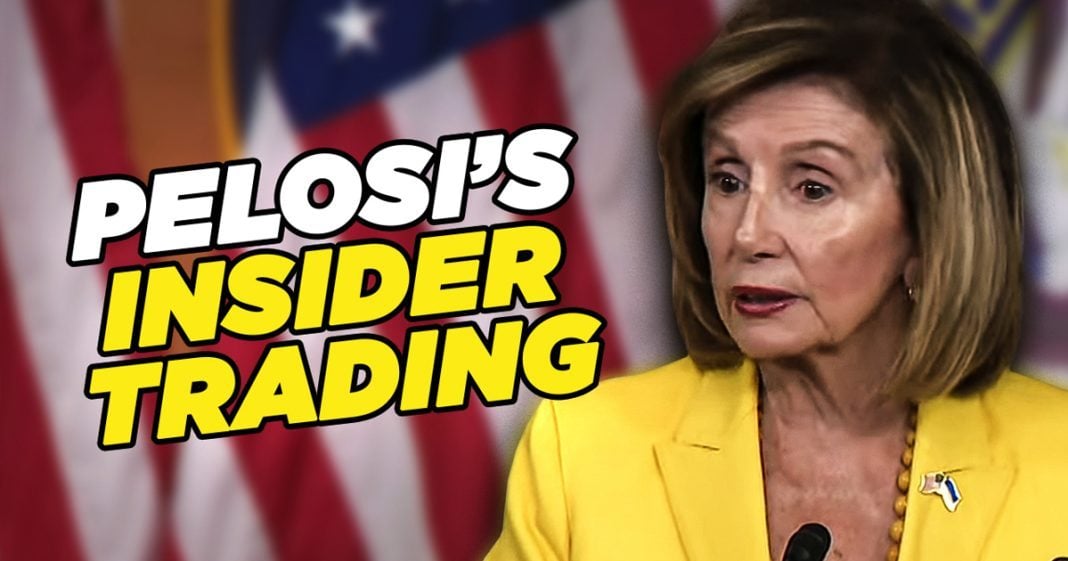 Mike Papantonio:             Nancy Pelosi’s husband bought millions in tech stock as Congress works on legislation that would clearly benefit industry. Wow. You know, I saw this story and the, it, it’s almost as if the writer completely missed the point. Don’t you think? Tell, why don’t you set it up. Okay.

Farron Cousins:                  Well, the real reason that this Yahoo finance reporter forgot to mention is that Congress is considering legislation to boost semiconductor production in the United States.

Farron Cousins:                  Basically hand a ton of money over two companies like Nvidia that’s gonna benefit the people who own the stock.

Mike Papantonio:             Isn’t this what we’re talking about? Here’s a reporter that does a two page report, talks about Pelosi and his, Pelosi’s husband and selling, he sold 200 options, he, call options 20,000 shares, $5 million over the count. Doesn’t ever tie it up. Why the hell do I care? How about this? The guy goes out and sells and buys semiconductor stock the week before, oh, by the way, coincidence, that Nancy Pelosi is pushing through this bill that’s going to bolster production of semiconductors. I mean, it’s, how does a reporter miss that?

Farron Cousins:                  Tie it up to something that has to do with Congress and then it suddenly does become an issue here. And this absolutely is a big issue. I know Paul Pelosi is not in Congress, but his, his spouse here is running Congress.

Mike Papantonio:             She’s running Congress. She knows a vote’s coming up that’s going to put a ton of money into the semiconductor business. Hey baby, you know, what’s gonna happen next week? We’re gonna do this. Why don’t you go buy some stock? Nancy Pelosi of course, kicking and screaming says, I will not change the law that allows congressmen and congresswomen to trade shares. I, I’m just not gonna do it. And all of a sudden she’s caught red-handed. I, I haven’t heard an explanation. Nobody’s asked her the tough question, ma’am this is insider trading. If anybody else did that besides you, they would be in prison for insider trading. But you can do it? Really?

Farron Cousins:                  Yeah. And that’s the big problem with this, is she disclosed it on her financial forms. So she said, yep, here it is. It happened. I’m reporting it like I’m supposed to. And because she did that, there is no criminal penalty whatsoever.

Mike Papantonio:             It, the announcement is this, I’m going to engage in insider trading. Since I’ve told you I’m gonna do it, I’m gonna be free to do it. If anybody else do it, did it, they’re gonna end up in prison. Wow.

Mike Papantonio:             Exactly. But, but, and she’s the one that’s fighting desperately to keep the right to be able to do that in Congress.