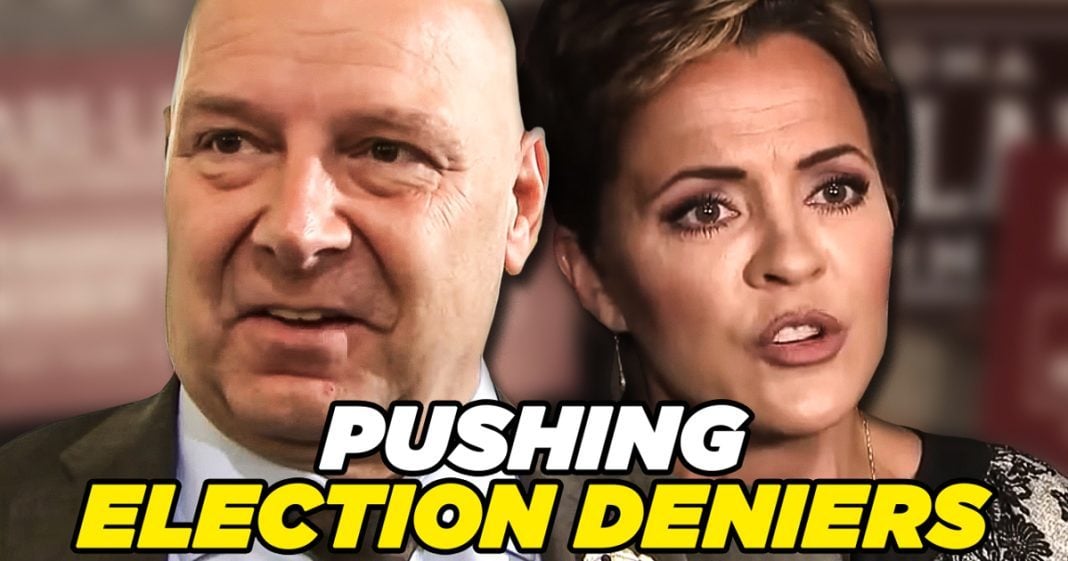 Conservative media outlet One America News has been hosting an array of Republican candidates who all deny the results of the 2020 election, helping to mainstream this view that has no basis in reality. This is happening as the network struggles to stay afloat while they continue to lose market share. Ring of Fire’s Farron Cousins talks with Bobby Lewis from Media Matters for America about what’s happening.

Farron Cousins:                  The One American News network is not having a very good year, but they’re still trying to keep their MAGA base happy by putting on a slew of Republican candidates who continue to deny the results of the 2020 election. Joining me now to talk about what is happening is Bobby Lewis from Media Matters for America. Bobby, it, it’s great to have you on here. I’ve I followed you on Twitter for quite some time. You’ve got a very impressive Twitter following by the way. I, I, I love it. I love to see it. And one of the things you do with Media Matters is you’re kind of one of the guys that really hammers in on OAN, One America News. So before we even begin, I just wanna say, I can’t imagine that that is pleasant having to go through what they’re saying on this, you know, absolutely ludicrous network here. So how, how do you even do that? I mean, really? How do you bring yourself to do that all the time?

Bobby Lewis:                        Well, it, it is a bit of a challenge. Yes. It’s a, it’s a very, it’s a unique challenge. Because One American News network, you know, it’s, it’s a right wing media channel. So a certain amount of it is predictable just from what it is. But, One American News, it, it goes just a little bit farther than a lot of its competition does. Like, Fox news and Newsmax have kind of backed off of saying that the election was stolen. But over at OAN, that’s still the bread and butter of the network. That’s like probably the thing that they do that sets them apart more from other networks. That’s just, that lie is so deeply embedded in their blood and they’re never gonna give it up. And I think that’s just characteristic of what we’re talking about with One American News. They are true believers in the lies that they’re spreading and they’re gonna spread ’em until they can’t anymore.

Farron Cousins:                  And so what we’re looking at now, and there’s a great report from Media Matters that came out this week, talking about the fact that you have some of these very extreme, you know, a lot of them endorsed by Donald Trump candidates, you know, Doug Mastriano, Kari Lake, and a bunch of other ones that are appearing on the network, not just on a semi-regular basis, we’re talking about some of these folks have dozens of appearances in just the last 12 months. So I do kind of want to go through that list just a little bit, because I know Mastriano and Kari Lake especially, those are the names that most people will recognize. If you follow politics, you probably know who these individuals are. You know how extreme they are. And One America has done a great job for these folks, you know, promoting them on the network and allowing them to promote not just election lies, but it seems like lies and misinformation about whatever it is these folks want to talk about. Right. I mean the, the lies run the gamut from the election all the way down to culture war issues, right?

Bobby Lewis:                        Oh yeah, definitely. Definitely. I, I think the, the important thing to remember with One American News platforming all of these, different election denying candidates is that it’s, for OAN, it’s a part of their broader campaign to deny the reality of the 2020 election. It’s certainly a bigger part of it. We have found over 100 appearances between just six candidates since the 2020 election. And those appearances are overwhelmingly about denying the 2020 election or spreading some other kind of ridiculous lie about it or trying to get a Arizona style audit in their own home state. And of those candidates of the four who have had their primaries so far, Doug Mastriano, Kari Lake, Kristina Karamo and Burt Jones, or excuse me, Mastriano, between the six candidates that OAN has primarily platformed for their election laws, four of them, Doug Mastriano, Matt DePerno, Kristina Karamo and Burt Jones, they’ve all won their primaries. Kari Lake and Mark Finchem still have primaries to go. But as you said, this shows that OAN has done a great job for these candidates and getting their names out there and potentially getting them support from the Trump base, all centered around these election lies, which as I said are really the, the foundation of what One American News does.

Farron Cousins:                  And when we look at who these candidates are, these are individuals who, of course, if they, you know, win in the general, you know, we’re looking at Mastriano, gubernatorial candidate. Kari Lake, gubernatorial candidate. Finshem, Arizona secretary of state candidate. DePerno, Michigan attorney general. Jones, Georgia lieutenant governor. Kristina Karamo, Michigan secretary of state. These are people who would be in positions to overturn or at least kind of get the gears rolling if we come back to another situation like we had in 2020. So, you know, these people are denying election results while running for offices that would allow them to actually put that denial into action.