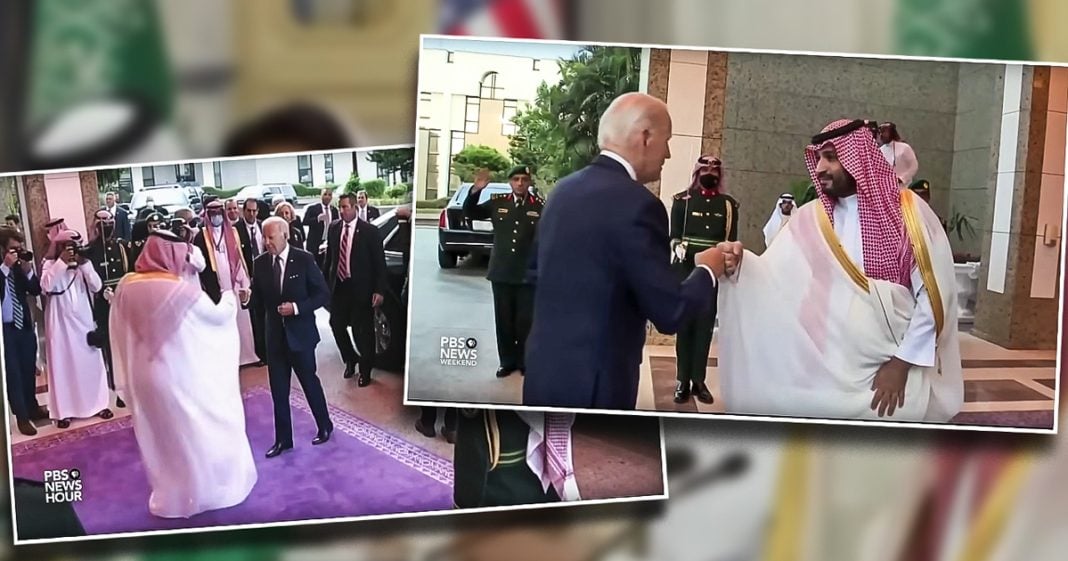 President Biden is back from his trip to Saudi Arabia, and it didn’t go at all as he had hoped. Mike Papantonio & Farron Cousins discuss more.

Mike Papantonio:             President Biden is back from his trip to Saudi Arabian and it didn’t go all that well. Ring of Fire’s Farron Cousins joins me to talk about what happened. We kind of have done three story, well, we did three stories before he went saying, don’t go, don’t go. It’s a mistake. It’s a mistake. Give me your take on it.

Farron Cousins:                  Yeah. It really, well, first of all, he shouldn’t have gone in the first place. You know, he, he absolutely should not have made this trip. And when he gets there, he did do the right thing. He brought up Jamal Khashoggi and the fact, hey, you killed him.

Farron Cousins:                  And then Saudi Arabia kind of hit back at something that, you know, makes a lot of sense. Like, well, do you remember Abu Ghraib? Do you remember all of those other journalists that you have killed around the globe? And you’re gonna sit here and lecture us.

Farron Cousins:                  About killing one man, which you know, kind of is a bit of an admission, like yeah, we killed him, but you guys are pretty bad too. And it just shows that the US unfortunately has no moral high ground on any of these issues.

Mike Papantonio:             MBS who shouldn’t be there to begin with. I mean, the question always come, the one of, one of Khashoggi’s issues was he would ask the question, how did these people get in, how, how are they in power? Who gave them the right to even be in power? How is all of this oil rich land theirs? It’s almost like there was no proclamation. And then you had, you had the British that supported the Royal family and that just can, you know, started a chain reaction. And the Royal family’s been there ever since threatening everybody who poses a risk to them. But to have MBS have the moral high ground when he says, well, what about your invasion of Iraq that was based on a total lie that was created by Dick Cheney and Bush and all those war pimps? And how about your, how about your involvement with Israeli par, apartheid, where you’re, where you’re pumping that up? So it raised some issues, but the, the, the real, the real issue comes down to this, he shouldn’t have been there to begin with. This is an ugly, ugly dictator that actually watched Khas, there’s some question, did he watch Khashoggi being murdered and dismembered as it was going on through a TV set?

Farron Cousins:                  And MBS was a part of that family. But there, there is a point to be made here. I mean, we never really had justice of any kind, the conversation just disappeared about all of that torture. The last we heard from it was when Eric Holder came in as AG and said, I’m looking forward, not backward.

Mike Papantonio:             Soon as he was in office, you had people like Eric Holder and Obama saying, we wanna look forward, not backward because the money was threatening their agenda. But on this story, I, to me, I think the important thing about it is when we know that Allende, for example, we murdered Allende. The CIA has murdered a lot of leaders over, over the globe, over a period of time. But when we kind of get it rubbed in our face by this psychopathic punk, it’s pretty painful.