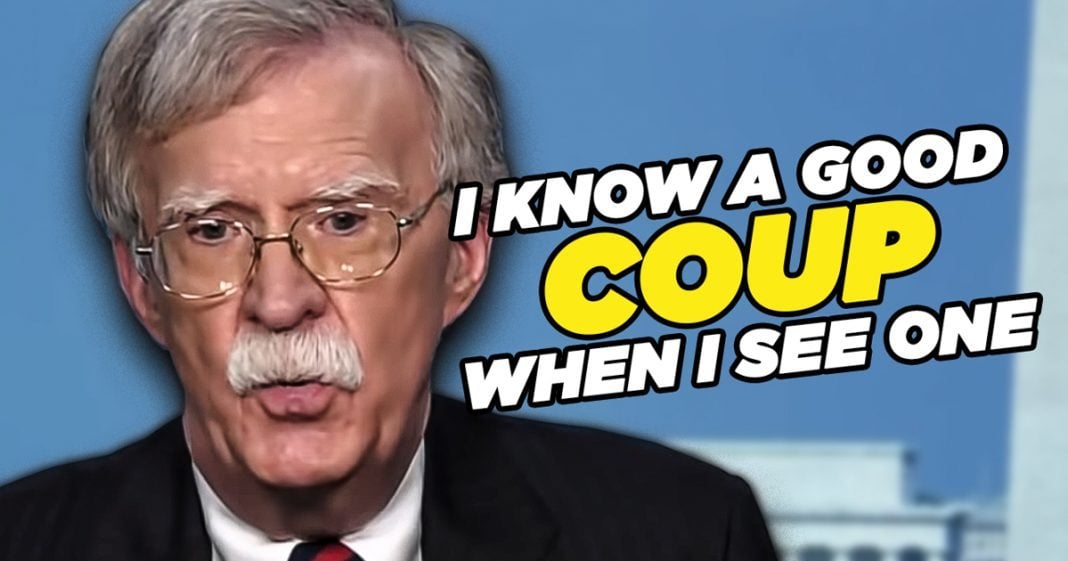 John Bolton recently admitted that he had helped orchestrate coups in other countries on behalf of the US government. Mike Papantonio & Farron Cousins discuss more.

Mike Papantonio:             Well, how about, how about, how about they never have, okay. I mean, really this has been going on with this guy. Look, there’s never been a war that Bolton didn’t want, didn’t love. Russia, yeah, let’s go after Russia. China, yeah, we need a war with China. Yemen, he was out front on Yemen. Syria, we need a war with, with Syria. Congo, yeah, we need to invade the Congo. Venezuela, we need to change the, we change leadership in, in Venezuela. And who does he do it for? He does it for all the corporate types, Raytheon and McDonnell Douglas and Boeing. Those are the people that he represents and, and, and, and, and nobody seems to be able to connect the fact that the guy’s a dangerous war pimp, and he’s still walking around in Washington, respected. He’s still showing up on, still showing up on the morning news Sunday mornings.

Farron Cousins:                  I know. And, and to feel confident enough to actually admit this. I mean, we, we’ve all known. I mean, those of us who, who understand eighties politics, going back to Iran Contra, we know who John Bolton is. He was involved in that.

Farron Cousins:                  So he’s been doing this for decades. But for him to now feel confident enough that I can go out there and sit on CNN and talk to the tens of people watching it and say, yeah, I, I did coup d’etats around the globe. What are you gonna do about it?

Mike Papantonio:             Yeah. In, in the Iran Contra, I mean, his whole thing was we gotta stop the Sandinista’s, you know, we gotta get involved. And the truth was, when you look back at it, it was a conflict almost completely driven by the United States.

Mike Papantonio:             And he was the guy behind it. But you know CNN loves him. Have you, sometimes count the number of times you will see this screw ball on CNN where he’s talking world policy and he’s use and, and advertisers love him.

Mike Papantonio:             I mean, Boeing and Raytheon, McDonnell, they love this guy because he’s the guy that’s talking up war all the time, including the war that’s going on right now in Ukraine. He wants to expand the war.

Farron Cousins:                  And, and CNN, you know, when there’s international conflict, that’s about the only time they actually get ratings.

Mike Papantonio:             War, war sells. CNN is the worst of the worst where it comes to selling war and this is their guy right here.