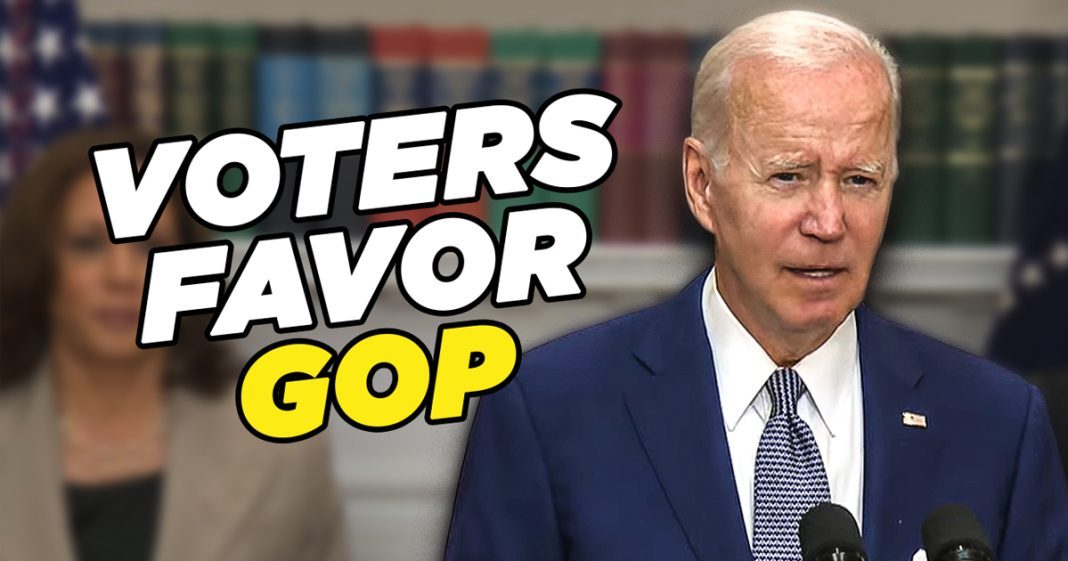 More than 1 million Democrats have switched parties in the past year, marking a serious problem for the Democratic Party. Mike Papantonio & Farron Cousins discuss more.

Mike Papantonio:             More than a million Democrats have switched parties in the past year, making a, it’s really creating a serious problem for the Democratic party. Farron, what is your take? This, this to me, if I’m a Democrat looking at it, I’m, I’m seeing the suburban swing votes that are leaving the Democratic party. That’s what’s happening.

Farron Cousins:                  Yeah. This is terrifying for the Democratic party. It’s also 100% predictable. We have seen a Democratic party that’s been in power now for 18 months. We just concluded the 18th month. So what have they done? What have they done to show you that they, they understand your problems? That they’re addressing the issues? And the answer is unfortunately for these voters, nothing at all. Their lives have, in fact, gotten worse, you know, economically, you know, politically with as divided as we are. And they looked at this and they said, look, I’m not gonna be a part of your club anymore because the public always does that. Right. They bounce back and forth every two years or so. That’s natural. But not in these numbers.

Mike Papantonio:             Well, you’re seeing it in Denver, Atlanta, Pittsburgh, Cleveland, Iowa. I thought the study was interesting. It was done by the AP and they really spent a lot of time trying to figure out what are these things, according, I’m just going from the study. But they found it that there’s this rejection of this woke leftist thing that the Democrats came in and tried, tried to sell. Okay. In other words, in other words, deal with, don’t deal with trying to reshape culture in 18 months, you know, don’t try to, don’t try to force something down my throat in 18 months that I don’t wanna listen to. Talk about politics, engage in good political change, do some good stuff for us. And, and that’s all they had to do here, but it, it’s kinda like the same, I don’t know if you followed the deal with, with Netflix, same thing’s happening with Netflix. They’re finding that all of this effort by Netflix to reshape culture, let’s, let’s change the way people think about this cultural issue. That’s where Netflix is getting killed right now. And there’s an exodus of left, of, of Netflix because people wanna be entertained. And the same thing with politics. They just want politicians to talk about politics that improve their lives. They don’t wanna, they don’t wanna be preached to about cultural change.

Mike Papantonio:             Okay. The me, your point being, it’s not the Democrats that woke up one day and said, hey, let’s force feed the American public these cultural changes. These, the way that we think about our culture. Let’s force feed them that. You’re saying that that wasn’t really part of the intent, but the Republicans have done a good job taking that and making the American people believe this is what the Democrats are doing. Did I get that right?

Farron Cousins:                  Yeah. And they obviously put the Democrats on their heels on these issues. So then the Democrats, when they talk about them, the Republicans can then highlight it and say, see, look. Now they’re shoving it down your throat again. It, it’s honestly, from a political standpoint, not saying I agree with any of it.

Farron Cousins:                  It’s a smart strategy by the Republican party because they have smarter strategists than the Democratic party does.

Farron Cousins:                  And then as the Democrats try to undo this culture war legislation, Republicans then get to come back and say, but they’re not focused on the economy.

Mike Papantonio:             You’re seeing it, you’re seeing it with the media. For example, CNN and MSNBC, it’s almost as if the public woke up one day, they said, shut the hell up. I don’t, I don’t wanna, I don’t wanna agree every time you’re trying to shove some cultural change down my throat, I don’t wanna agree with that. And their numbers went down. Same with, same with Netflix. Same with Disney. I mean, just take a look at that. But I really do buy into your idea that maybe it didn’t originate from a political standpoint with the Democrats, that the, the Republicans had just been smart in taking it, making it look like that.

Farron Cousins:                  Right. And, and like I said, once they get the Democrats to have to address these issues, then the Republicans go out there like they are right now, you look on social media. The Republicans are saying, listen, Democrats are all focused on, on the Roe decision and they’re not talking about inflation that’s hurting you and your family at home.

Farron Cousins:                  They create the issues, force the Democrats to have to address it and then hit them for not doing the stuff.

Mike Papantonio:             Real quick before we go onto the next segment, Farron. I’m, I’m interested, you’ve talked about, and I agree with you. I, I’ve, I’ve taken a look at everything I can read about it. Is that they, there, there’s this belief that I, I think there’s a groundswell belief that Roe V Wade decision is going to really be a big, big change for the midterms. I, you and I have talked about it before you, you’re of the opinion, where do you fall on that? Do you really think it makes that big of a difference?

Farron Cousins:                  If the election were today, you know, week and a half away from the decision, sure. Anytime beyond that, no. The public does move on. I mean, eventually we’re gonna hit a point where the public, I mean, and I’m talking within six months, the public’s gonna be like, well, it’s pretty much it’s always been that way.

Farron Cousins:                  They will forget about this. The anger will subside because you can’t sustain anger for that long.

Farron Cousins:                  So they will move on to the other issues. They’ll keep getting hit economically every time they go buy groceries, every time they fill up their tank with gas. I, I’d love for it to be a political issue in November, but I don’t think it has, it’s not, it’s not gonna be.

Mike Papantonio:             It, it, it, it could be, but the way even, it’s almost as if the media is even playing a role. I, I, every time I watch some story about it, it’s almost as if they have the, the really oddball fringe out, you know, throwing F bombs and attacking this person, attacking. And, and you go, that’s not really the way most people think. They just want the, they want the logic on how bad this decision was. They don’t want to go, let’s go kill this person or let’s take this, this, you know, really big step towards doing away with the Supreme Court. But that’s the kind of, that’s the kind of edge you’re seeing out there right now. And I think it’s, I think it’s hurting them.

Farron Cousins:                  Well, and not to mention you have a lot of people right now that yes, even though the conservative court did this, they’re furious with the Democrats for literally sitting on this issue for 50 years.

Mike Papantonio:             Didn’t rise to the occasion to actually do anything about it.