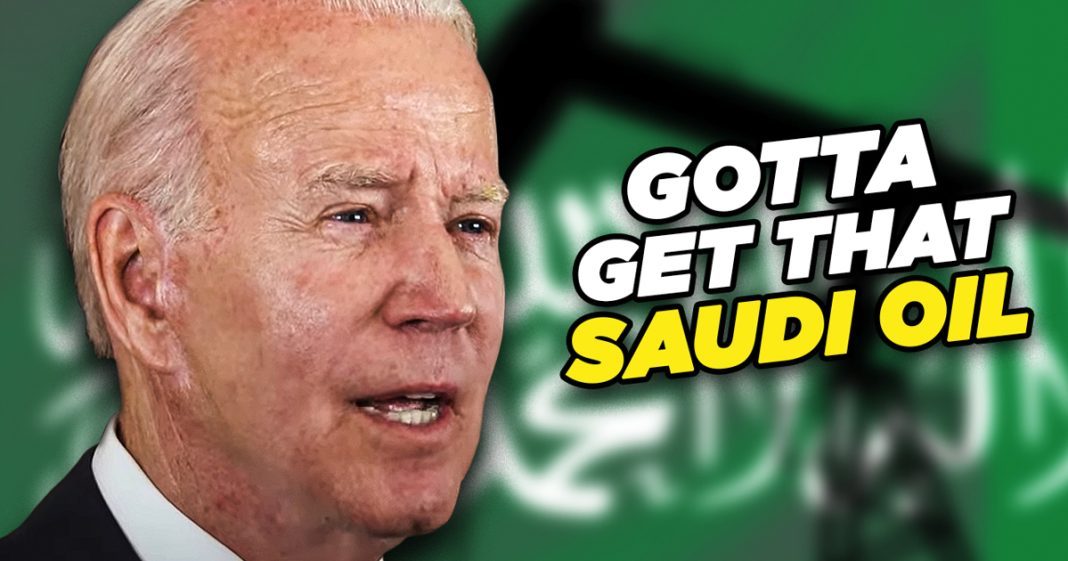 Mike Papantonio:             President Biden has decided to make nice with Saudi Arabia. He’s gonna ignore the history of human rights abuses. He’s gonna ignore everything that he talked about when he was running for president. When he went on, when he went on the rampage and he said, you know, that, that Saudi Arabia, what did he call them? That they were, that they were a, a, a bunch of pariah. He called the prince there a pariah. And he says, I’m different from Trump, vote for me because I’m different from Trump because I know that Saudi Arabia is covered with a bunch of, of, of pariah. I mean, he was very clear. He said, I’m not gonna deal with this guy. He’s gonna become a victim. What’s changed?

Farron Cousins:                  Uh, he wants oil. And I mean, that, that really is so sick, but now they’re willing, they’re gonna overlook we know you killed Jamal Khashoggi. We know you did it. The blood is on your hands. All of our reports have said you did it. But we really need that oil. We know you’re committing atrocious human rights violations in your own country. We know you’re doing it to your neighbors. But we really gotta have that oil because we need a win in the midterms. Because at the end of the day, that’s what this is about. You know, politicians only care about the cost of things that affect us when it’s an election year.

Mike Papantonio:             But there are alternatives to going to. Look there’s, here’s the vision I have of him. You got an 80 year old man showing up in front of these murderers, these, these psychopaths on bended knees saying, hey, you know what, if you’ll just help me here. I got midterms coming up. If you’ll just help me here, what I’ll do is I’ll train all of your people in how to use all these sophisticated weapons and I’ll sell you anything you want. And in the hands of Saudi Arabia, that’s pretty scary stuff, isn’t it?

Farron Cousins:                  It, it, it is. And, and I don’t think people understand that that’s actually not hyperbole either. We do bring Saudi military over here to US military bases. We trained them. We paid for all of this. We teach them how to use these weapons that we just sold to them.

Mike Papantonio:             Hell, I’m handling a case where one of the folks that they sent over murdered, murdered soldiers on the base, because he was directly tied to a terrorist cell. And so, but, but do you have that picture in your mind? An 80 year old man on bended knees is supposed to be the president of the most powerful country in the world saying, oh, you know, please we’ll send you more weapons. How disgusting is that picture?

Mike Papantonio:             That’s, Farron, that’s brilliant. As a matter of fact, that’s what was done with the Volkswagen in Germany.

Mike Papantonio:             That was, it was government’s gotta produce it. We gotta be standing behind it and the Volkswagen emerged, you know, the same thing can happen here. I mean, it’s, it’s kinda like when, when John F. Kennedy said, we’re gonna be on the moon, we’re gonna put everything on being on the moon. It happened. This guy could do the same thing, but he doesn’t have any leadership ability. He doesn’t even have people advising him. Instead, they’re telling this 80 year old guy, hey, you know, why don’t you just go over there and grovel because that’s what it’s gonna look like.