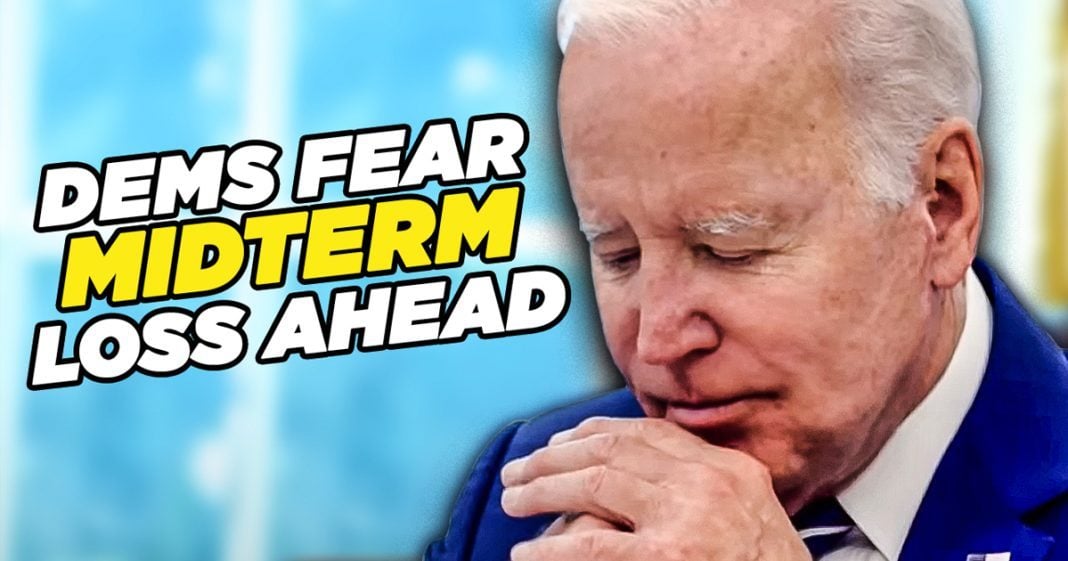 Democrats in Congress are getting sick and tired of Biden’s inaction, and they realize that this is going to cost them big in November. Mike Papantonio & Farron Cousins discuss more.

Mike Papantonio:             Democrats in Congress are getting sick and tired of Biden’s inaction and they realize that it’s going to cost them big in November. I mean, I, you know, the writing is all over, isn’t it?

Farron Cousins:                  It, it is. And you know, this is kind of a continuation. Obviously we talked about some of the other big issues that Biden is facing, you know, personally, professionally, but now it comes down to what are you doing right now?

Farron Cousins:                  We are facing multiple crises on several different fronts. We’ve got foreign policy disasters. We have domestic policy disasters, inflation, still going through a baby formula shortage that, you know, everybody seems to have stopped talking about. Massive gun violence epidemic. All of these things laying right on his desk. And now you have Democrats in Congress pounding their hands saying, what are you doing?

Farron Cousins:                  And the answer of course is nothing because he wants to yield to Congress. Congress says, look, we’re gridlocked. You’ve gotta start with that executive order pen immediately.

Mike Papantonio:             They’re like, the leadership is like a ship stuck in mud. Really. That’s, that’s the best description that I’ve heard about it. And as, as you look forward, I mean, it’s not just gas, it’s just not inflation. It’s not just lack of, lack of trust, you know, it’s, it’s, it’s not just those things. It is the idea that between now and November, he’s gonna have other problems on his desk. He can solve maybe one or two, but he can’t solve everything that’s coming at him. There’s just too much coming at him. Everything from the supply chain to, to you name it. Every day there’s a new gaff. There’s a, the media talking about something stupid he said somewhere around the world and those things just add up. So right now we’ve got the, the latest prediction if you’re following it, the latest predictions is that Ukraine is going to turn into one of those big mud puddles for him. What is your take on that?

Farron Cousins:                  I, I, I agree a hundred percent on that. I, I think we’re watching a very unfortunate situation unfolding in Ukraine. I think that’s kind of the best way to say it. There’s no real clear strategy I think from the US standpoint right now. We’re just feeding ’em all these weapons. We have to change course on this because obviously the parties involved are not.

Mike Papantonio:             Well, that’s what’s happening already. You see, that’s what’s happening. How dare you, you know, pay the weapons industry $40 billion and send it to Ukraine when we, there’s not stuff on our shelves in some parts of the country. We’re paying, you know, outrageous amounts for gas, in California $9 a gallon. We’ve got inflation, we’ve got recession and now Ukraine. And so, you know, the, the, the point is he’s gotta have a plan and if that plan, he doesn’t have a plan by November, it’s just gonna be another brick in the wall. Isn’t it?

Farron Cousins:                  Is a humongous one. Everybody’s been, you know, pounding their hands for a year and a half now saying you can issue an executive order and end it all.

Farron Cousins:                  You can do that very easily and he still won’t even do that. He won’t take the easy victory in front of him. He needs nobody else to do it. You actually have groups that have drafted executive orders and said, here, use this as your blueprint.

Mike Papantonio:             Most of the time if you look at it, it’s because it’s going to offend Wall Street, or it’s gonna def, offend corporate America. That’s where you get the term corporate Democrat. That’s what we’re looking at right here, corporate Democrat. And, and, and it’s, I don’t know why it’s, it’s almost like a, a train wreck in slow motion that nobody will acknowledge.