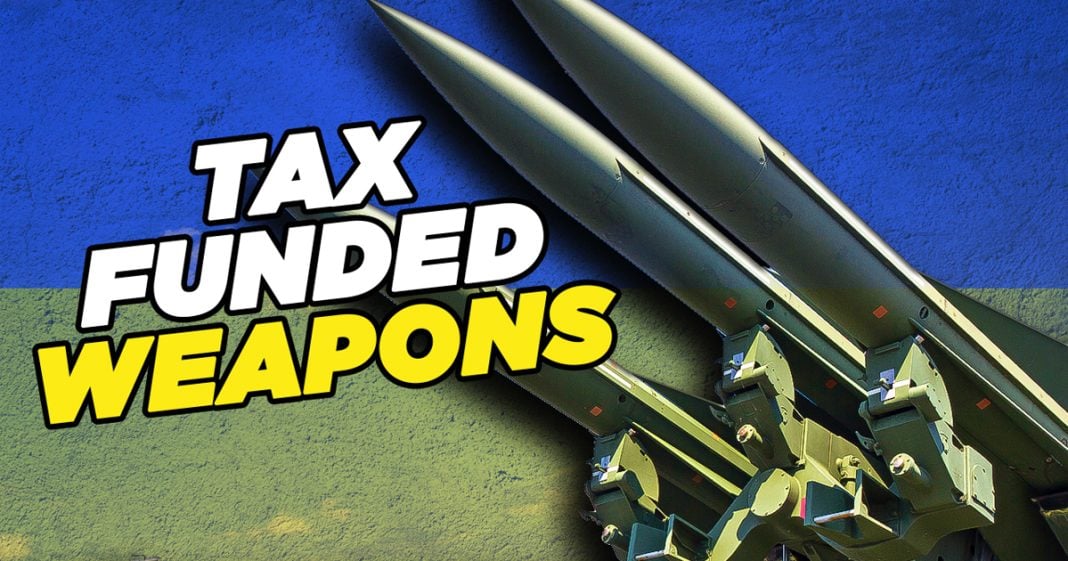 Your tax dollars are being used to prop up defense contractors, and the Ukraine conflict is giving them everything they’ve ever wanted. Mike Papantonio & Farron Cousins discuss more.

Mike Papantonio:             Your tax dollars are being used to prop up defense contractors and the Ukraine conflict is giving them everything they want. It is like a bonanza out there for the defense business. And you know, there’s a story behind there that everybody misses and I don’t know why because it sits right there. Okay. First of all, you got a Pentagon, that’s got an $800 billion budget. Okay. So what, anytime there’s a conflict, whether it’s Ukraine or South America or Africa, wherever, we ship out all of our missiles, for example, we might ship out, you know, 500, 600 missiles to a certain place. And then the Pentagon goes back to the producer of that missile and says, make us 500 more. So do the math. I mean, who’s making the money here. The money is the weapons industry and that’s what, you know, it’s what we’re seeing with Ukraine with $40 billion being sent there.

Farron Cousins:                  Well, you know, that’s a really good point that I think a lot of people don’t quite understand when we talk about these military budgets every single year. You know, 700 billion, two years ago, 740. Now over 800 billion this year, we are buying all of these things every single year, but we’re not necessarily the ones.

Farron Cousins:                  Using them. What we do just like you said, oh, there’s a conflict over here. Nobody’s paying attention. Take a third of our javelin missiles.

Mike Papantonio:             Here’s what shocks everybody. When you tell them that every tax dollar that you pay to the government, one half, one half goes to the military and most of it goes to the defense contractors. And I mean, that’s a staggering number. You pay a dollar and 50 cents of that is gonna go for this type of thing, buying missiles and sending ’em all over the world. But with, with a budget of $800 billion, there ought to be some. And I, by the way, Massachusetts, I don’t know if you saw that Massachusetts is coming up with a standard where they have, there’s a responsibility for the government to report how they’re spending tax dollars. See, this is how this has happened. If you ask, if you ask the average person out on the street, did you know that half of your tax dollars go to things like missiles and airplanes and Pentagon, yada yada? No, they don’t have any idea. So Massachusetts is saying, we gotta, we gotta end that.

Farron Cousins:                  Yeah. They, they wanna make it completely open to where the breakdown of how your taxes in the state are spent is available publicly to everyone. And it’s a great piece of legislation. Something that we absolutely should have nationally. But I still think even if we had it nationally, even if we had it printed out and delivered to everybody’s front step,

Farron Cousins:                  Still half the country would say, I’ve never seen it. Because they choose not to care about these things. You’re, you’re losing your tax dollars. You know, the national Institute of health, right, the people that are supposed to be curing cancer and Alzheimer’s and all these deadly diseases, they get 45 billion a year.

Farron Cousins:                  Not even cures. We’re wasting so much money enriching your Raytheons and your Boeings and, and Lockheed Martins.

Farron Cousins:                  And, and people are dying of things that if we actually put the 800 billion towards it, even for one year, we’re gonna start curing some things pretty darn quickly.

Mike Papantonio:             How, how about education, education? How about infrastructure? How about food and shelter for people who need food? Well, like you say, how about taking that and saying, we’re, we’re gonna put everything we have into curing Alzheimer’s disease, or we’re gonna put everything we can into curing whatever the disease is. But the point is you can’t do that when you’re taking one half of every dollar and you know that you’re sending it all over the world. They didn’t even, you know, it was unanimous with Democrats, unanimous. Yes, let’s send $400 billion worth of missiles and military arm and, and military weapons to, to Ukraine, unanimous. Nobody said, well, can we do anything else with that $40 billion?

Mike Papantonio:             But right now you gotta everybody ginned up, oh, we gotta come to the aid of Ukraine. You know my position is, get the hell out.