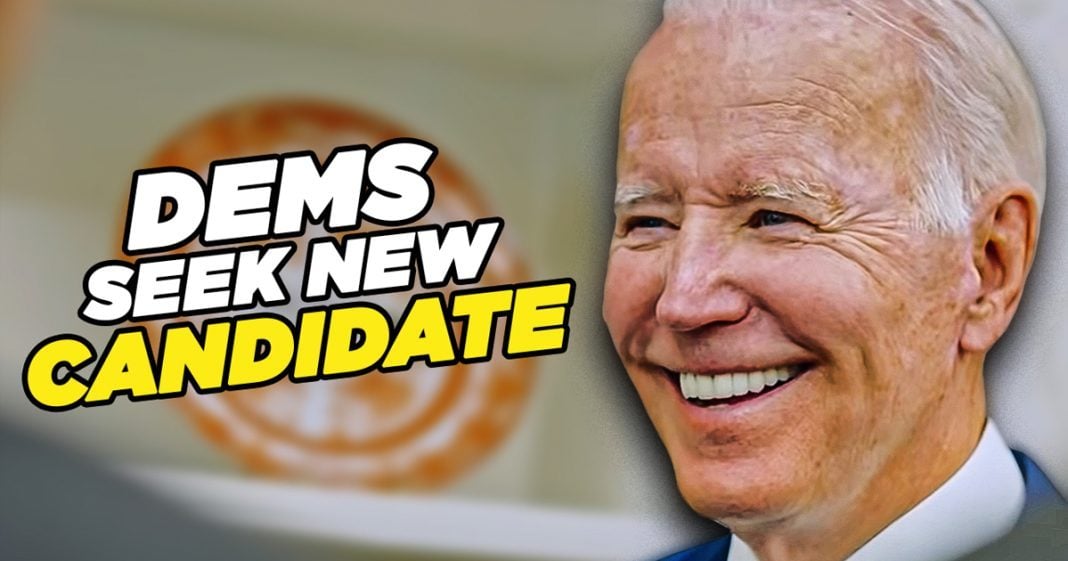 Democrats are slowly starting to raise the alarm bells about President Biden’s chances in 2024, and they desperately want someone else to run. Mike Papantonio & Farron Cousins discuss more.

Mike Papantonio:             Democrats are slowly starting to raise the alarm bells about president Biden’s chances in 2024 and they desperately want someone else to run. Ring of Fire’s Farron Cousins joins me to talk about this and many other issues. You followed, I mean, I think when I, when I start looking at everything you were the first person I read or heard that started talking about, really? I mean, you know, is this what we want? Now, now the New York Times and Washington Post and some of the mainstream kind of things that have always been there for him, they’re starting to say, ah, maybe not.

Farron Cousins:                  Yeah. I mean, look, you and I had actually talked a couple weeks ago, there was a report that there were some whispers, you know, in back rooms, oh, we don’t want Biden. But now those whispers are turning into very loud voices with members of Congress, strategists, party donors and regular voters too, saying, this guy’s not gonna win in 2024. He’s gonna bring us all down. We have to do something. And, and when you think about it too, you’ve got two years, I mean, less than two years, really, to find a good replacement.

Mike Papantonio:             Well, we should have started already. He needs to do what’s best for the country. He needs to announce and say, I’m not going to run. He needs to clear the field and say, I’m not going to run because I’m gonna be 82 years old when I run and I’m gonna be 82, 86 if I finish my second term. It’s just the right thing to do. So you have, you have the Democrats now finally venting their frustration. They can’t ignore it anymore. The Democrats that were so horrified to say anything critical because they were afraid it was gonna hurt the Democratic party. The Democratic party is already hurt.

Farron Cousins:                  Well, and another thing too is you gotta look at what’s happening over on the Republican side. Sure, Trump is still at the top, but there’s cracks starting to form. And you have a lot of Republicans saying, look, we don’t want a 78 year old guy who’s just gonna be talking about his bitterness about 2020. So we look at Ron DeSantis, he’s younger. You know, he, he doesn’t have the gray hair yet. He’s still, you know, a regular looking guy. So they’re flocking to him for the same reasons that Democrats are starting to get upset with Biden.

Mike Papantonio:             And Trump needs to do the same thing. Trump needs to say, I’m not gonna run. I’m gonna cause all this chaos, but I’m not gonna run. I mean, after these hearings, the January 6th, I mean, there’s so much there. I mean, come on. The guy, he just needs to come out and say, look, I’m gonna step aside. I’m gonna be the person maybe that I can go around and help in the midterms, but I’m not gonna run. Look, but what, what’s happening with with Biden right now is this, it’s, it’s fear. It’s disappointment. It’s, it’s resentment to some degree that’s festering. And look, you can’t ignore. You’ve got, you’ve got the disaster with, with gas prices. You got the disaster with inflation. You’ve got his gaffs, you know, his gaffs that are now starting to create really a question of worldwide power structures. You know, he’s saying things that can start another war. Can start some type of conflict where they shouldn’t. So all of this stuff is finally being talked about, these things I just read are all being talked about in the New York Times.

Mike Papantonio:             And they’re saying, this is the problem. It’s not just physical, it’s mental and it is age. You just can’t ignore the fact that he’s gonna be 82 years old when he runs.

Farron Cousins:                  Well, and Biden has a perfect out as well. You know, he could easily come out right now and say, listen, folks, my goal was to be your bridge president. You know, we, we had four dark years of Donald Trump and I, I came along. I wanted to pull us through from that. I’m the bridge. I’m not the vehicle. I’m not the driving force to take you into the future. I yield that to someone younger. I think somebody else in the party can come out and continue you on this path that I have put you on. There’s very diplomatic and statesmen like ways to do this.

Farron Cousins:                  Right. And he can save face and it also kind of saves him from having to worry about, again, another election. It, it’s a smart thing to do for him personally and for the party politically.

Mike Papantonio:             I, I completely agree Farron, and you know, the, the most troubling criticism is that, look, you had the presidency, you had the House, you had the Senate and you still couldn’t do anything. And they’re gonna say, ah, but Manchin. Ah, but Manchin, You know, really, I mean, no, not, ah, but Manchin. It takes leadership and the guy just doesn’t have the kind respect that gets anything done. And, and he’s gotta come out and say, no, I’m not going to run. He can’t be selfish about this. And nevertheless, today the White House says, yeah, he’s gonna run.