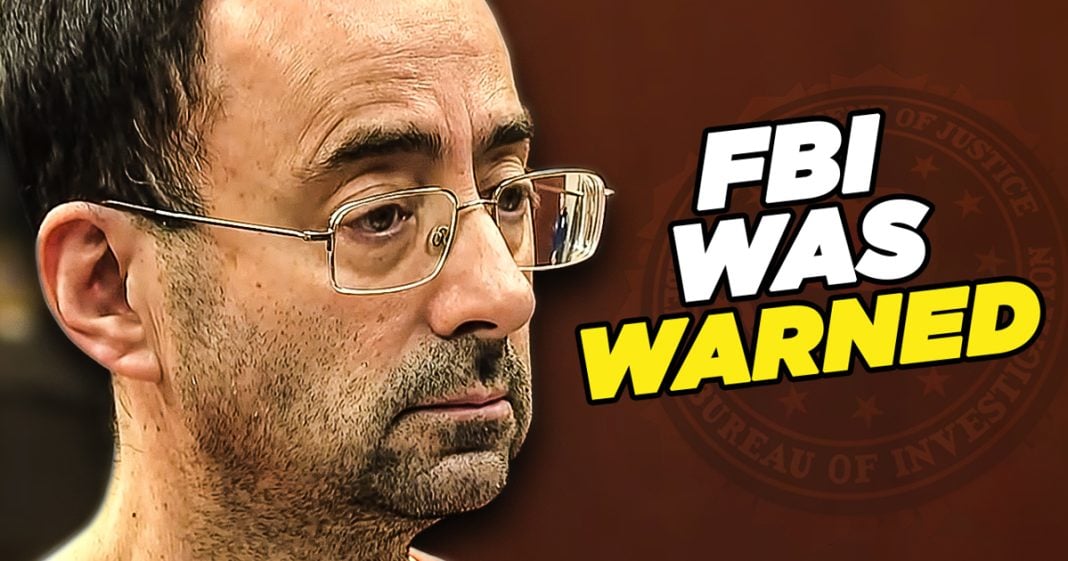 The women who were abused by Larry Nassar during their gymnastics careers are suing the FBI for failing to take action when they warned about what was happening. Mike Papantonio & Farron Cousins discuss more.

Mike Papantonio:             The women who were abused by Larry Nassar during their gymnast careers are soon the FBI for failing to take action that they were warned about. They were told upfront, look, this is happening. They were told in 2015, they had reams of information in 2015, understand. Most of the, most of the bad, really bad stuff happened between 2017 and 2019. But in 2015, they’ve got witness statements. They’ve got, they’ve got victim statements. They’ve got doctor statements. Yeah, this is all true. The FBI did not do their job and they, you know, they were sued, what the lawsuit that took place for the school shooting, you know, they were hit for $125 million. That should happen here, shouldn’t it?

Farron Cousins:                  Oh, absolutely. And, and, you know, like you said, the FBI was told and he was allowed to stay on the job while the FBI was just kind of toying around with, well, do we launch an investigation? Do we not? Do we even approach him? Do we talk to him? And all the while this was happening, the FBI’s ringing their hands, this man was still, as far as we know, abusing more and more women. They allowed, allowed more victims to, to happen.

Mike Papantonio:             Give me your landing on it. What was it about? How in the world does somebody, this is their only job. I mean, that’s the job the FBI’s supposed to take care of. And I, I realize there’s laziness. There’s just half kind of thinking with every governmental agency. But we hope the FBI that, that, you know, we don’t constantly see ’em screw up after screw up like we saw with 9/11, like we saw with, with the Marjory Stoneman high, where the shooting took place, they were warned ahead of time it was gonna happen. They did nothing. At some point, what, what is that about?

Farron Cousins:                  Um, I, I think at this particular instance, you still have this mentality that permeates this, that, oh, these girls are making it up. You know, these are young women. Oh, look, you’ve accomplished so much. What are you really complaining about? I still think you have a lot of that mentality, not just with the FBI, but throughout all the country. You know, we, we’ve seen it a lot with people coming forward with allegations of abuse. The first reaction of half the country is, ah, she’s making.

Farron Cousins:                  So, so a lot of that, you know, Larry Nassar was in this big position of power with USA gymnastics. Nobody wanted to ruffle any feathers, because that’s where all the Olympians were coming from.

Mike Papantonio:             So how many, how many young girls were molested because of it, 90 claimants conservatively that have come forward ,more than a hundred they think the claim. Now here’s, here’s where it really gets ugly. They didn’t, it’s not that they were lazy. They actually phonied up reports and didn’t tell the truth to the Inspector General’s office. When the Inspector General started looking at, they were phoning stuff up to make it look like they had done their job. They phonied up stuff to make it look like, ah, there’s nothing to see here. That’s the frigging FBI and we ought expect more. And I, I was so glad when, when they, they hit ’em for $127 million with the high school shooting there at Marjory Stoneman high, because they had been warned years in advance that there was a problem here.

Farron Cousins:                  Well, and, and I hope that this lawsuit is successful. Right now, they’re suing for about a billion and of course you do have those advising FBI, you need to make a settlement. You know you messed up. The evidence against you right now is absolutely overwhelming. You’re not gonna win if this goes to a jury trial.

Mike Papantonio:             And they know there’s an uglier story that needs to be told. And we’ll tell it right here and hopefully the media.

Mike Papantonio:             I don’t think, I don’t, maybe corporate media will actually tell that story, but I know we’ll be telling it right here.