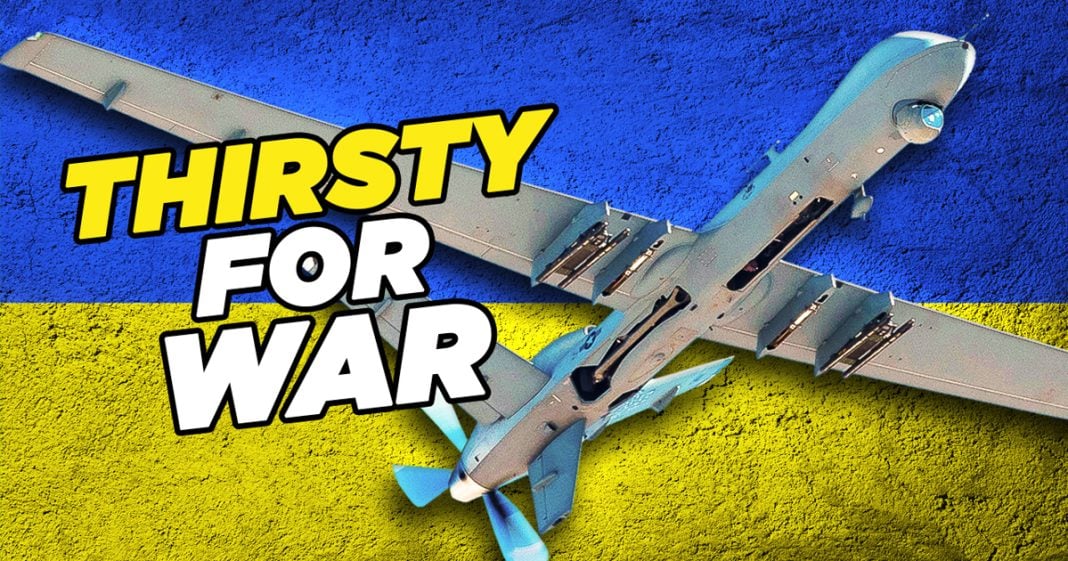 Mike Papantonio:             Ukraine is asking for highly sophisticated hunter killer drones and the defense industry, well, they’re begging the government to please make these, make these available in Ukraine. First of all, have you ever been more concerned? I mean, in, in your lifetime about how close we are to a potential nuclear conflict caused by Ukraine that now we’re, we’re giving them long range missiles that can hit Moscow. NATO is giving them long range missiles that can hit, hit Moscow. But this is a, this is a dream for the weapons industry. So they, they’ve tried to launch this idea about the hunter killer drone and we, we’ve used it in Afghanistan. We’ve used it in Somalia. We’ve used it all, Yemen, all, all over the world. But it hasn’t been talked about. Explain what this is, with the hell fire missile and the killer drone.

Farron Cousins:                  Yeah. These, these are the drones basically we send in when we’re not worried about civilian casualties at all.

Farron Cousins:                  We just want to kill as many people as quickly and quietly as possible. Sort the bodies out later. Then announce, hey, two of the people we got were bad, guys, you know, the other 10 weren’t. It was a family getting into a car. We covered that story.

Farron Cousins:                  But now Ukraine says, well, guys, we need these. We, we really need these over here. So what’s even worse is you have retired generals going out in the media, selling this idea to the public, you know, telling people that, oh, no, this might be our only way to help Ukraine. Oh, this might be the only way to stop this evil, brutal dictator over in Russia. And yeah, Putin is terrible. Nothing that he has done is justified. But we are inching closer to getting the US fully involved in a war in Europe.

Farron Cousins:                  Right. And, and every time we send a new shipment of weapons over there to Ukraine, Russia amps up their rhetoric.

Farron Cousins:                  They ramp up their attacks. Their media last week was already saying, we should basically already consider this World War III.

Farron Cousins:                  Not approaching World War III. We’re pretty much in it right now. And we, you know, they’re not ruling out the use of nuclear weapons. Now, maybe that’s a, just a talking point.

Mike Papantonio:             You have the oligarchs who are very concerned about his mental health and his physical health. Okay. When he makes a threat like that, understand he comes from, he comes from a generation that was well aware that in the second World War Russia lost 26 million people, mostly from Germany. Germany was the people. That’s why you see, still see that hostility between Germany and, and, and, and Russia. And unfortunately, Germany has a big input as to these long range missiles. They’re talking about Germany here. When they talk about you, you know, you’re gonna give these people long range missiles that can hit Moscow, and oh yeah, you’re gonna give them killer hunter, hunter killer drones to go after our people. There’s no way that this guy’s just gonna back. He’s not gonna back down.

Mike Papantonio:             How do, how do people talk about this and not understand what the risks are, Farron?

Mike Papantonio:             And we get control over NATO where NATO is not dictating policy that might put us in a world war. That’s what we do. Biden won’t do it. There’s no way he’s gonna do it. He is cap, he is captive of the military industrial complex, just like all the Democrats are and all the Republicans are. So he’s not gonna do anything. And this is gonna rock on until this threat of a nuclear, nuclear war really does occur.

Farron Cousins:                  Well and right now the US is engaging in military exercises with South Korea. They’re trying to do a show of strength against North Korea. We’re testing out missiles over the Pacific Ocean.

Mike Papantonio:             What’s significant about that? You’ve got NATO on one side, you got the West, and then you got the US and Korea on the East and you got Russia in between. And Russia’s, you know, like it or not, they have a big capability where it comes to nuclear power.

Farron Cousins:                  Well, we cannot continue to send them weapons. What, what concerns me obviously, and I know it concerns you is the Ukrainian people and, and the Russian people. You know, the people who do not want this either. They’re at the whim of this madman in Russia,

Farron Cousins:                  And, and in Ukraine, you’ve got people trying to flee the country. So we’ve gotta figure out how to help them that doesn’t send just bullets and bombs over there.

Mike Papantonio:             Well, Biden is not engaged enough to do it. I don’t think he’s alert to what really is happening here. I mean, you know, he’s got all these advisors look at who his advisors are. Look at who’s showing up on CNN and MSNBC to talk about Ukraine. Go take a look at who these folks are showing up on MSNBC and CNN, take a look at who they are. Look, they’re gonna, they’re from the, they’re from the military industrial complex. They’re, they’re huge lobbyists for the, for the weapons industry. They’ve come up through the military, you know, completely wed to the weapons industry. That’s who corporate media has, is the talking heads here. And they’re scaring the hell out of the American public, rather than telling the truth. A, we shouldn’t be there. That’s the first thing. B, if we stay there, it’s gonna continue to escalate.

Farron Cousins:                  Well, and, and these are they’re, they’re retired generals and so when people see that on the little moniker on the bottom, like, oh, well, this person knows what they’re talking about. I should listen to everything they say and not question any of it.