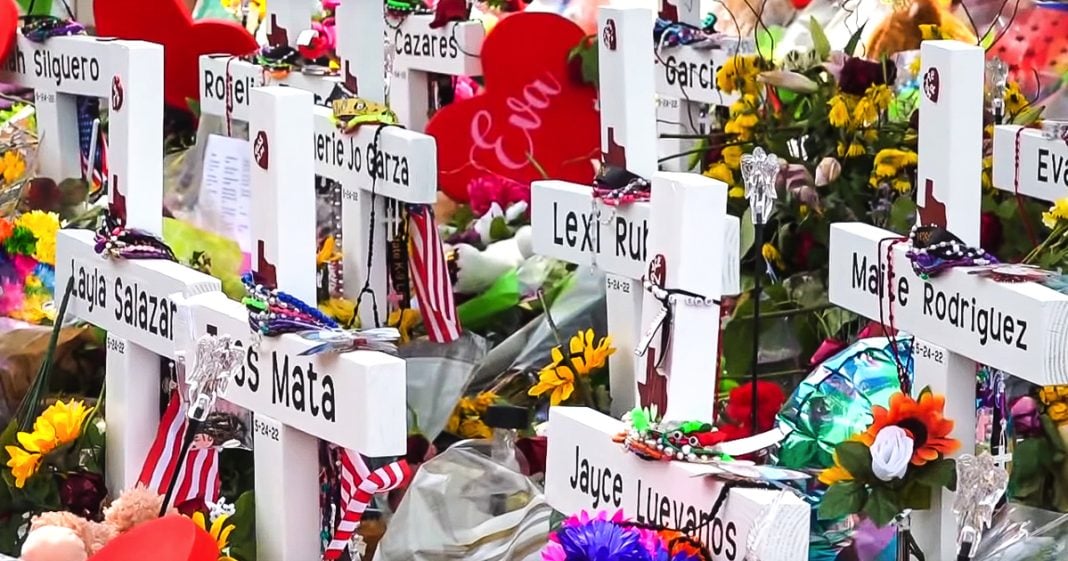 Local leaders across the country are wondering when the next catastrophe will it as Congress slow-rolls gun control measures. Mike Papantonio & Farron Cousins discuss more.

Mike Papantonio:             Local leaders across the, the country are wondering when the next catastrophe is gonna happen, as Congress slow rolls the gun control measures that they’re talking about. Wow, this is a big topic. My, my take on this topic, you know what, let’s take a minute and, and talk about maybe some of the issues, Farron, that everybody’s not talking about. Why don’t you, why don’t you lead it off. What, what is your thought about, what, what are some of the issues that you think, you know, you hear gotta do away with AR, AR. Gotta do away with, whatever the, the attack rifle is, whatever the brand is. Gotta do away with it. But there’s so many other issues that they’re not talking about here that now’s the time to talk about. What’s your thought?

Farron Cousins:                  Right. I, I think right now what we’re seeing is the same solutions that they talk about after every mass shooting. And sure, it does feel like we might be a little closer to doing something about it this time, but if we’re gonna do something, it needs to be things that are not prohibitive, I guess would be the word I would use.

Farron Cousins:                  And if you ban certain types of weapons, you’re always gonna have a fairly large section of the population that absolutely shuts down upon hearing that.

Farron Cousins:                  So how do you avoid that? Well, I think the big thing that we have to move towards is liability insurance for every weapon you own. Any gun you have, you have to carry an insurance policy with that gun. Basically make it cost prohibitive. You’re not taking away anybody’s rights. You’re not, you know, taking things off the market or pulling ’em outta their homes. You’re just saying.

Mike Papantonio:             It’s like, if you wanna own a pit bull in your home, you’re gonna have to pay some extra insurance, if you can get insurance at all. And, or, or how about this? How about, so somebody hoards 10, 12, 15 guns, they have to have insurance on each one of those guns, right?

Mike Papantonio:             And that, so that’s one of the things that’s being talked about. Unfortunately, it’s not being talked about enough. Another thing that’s being talked about, I just wanna know your reaction to this, I thought it’s an interest, it’s worth discussion. I don’t know that there’s any wrong or right about this because it’s gonna take a lot of discussion. But the, the discussion now is that the, that the desensitizing of violence with video games, with movies, with, with make believe TV. That, that all of this thing becomes a make believe process when you have a video game, for example, and the discussion is that, you know, kids sit for hours playing that video game where they, you know, kill 50 people in the video game. You and I probably disagree on this. What do the numbers show on this?

Farron Cousins:                  But what I do think, and this is interesting, because I don’t, I personally, I don’t think it’s the video games, but what I do think we see an abnormally large number of children in this country, not mass shooters, but kids that get their hands on their parents’ guns.

Mike Papantonio:             And that raises the next issue that’s, I love that these topics are surfacing. Okay.

Mike Papantonio:             I’m just trying to go down the list of topics that are surfacing besides the old talking points, the same old talking points. The parenting. How about, how about parental liability? It’s like the last, I mean the, the latest shooting in Texas. The, the mothers asked, well, what’s your opinion and she says, well, he must have had a good reason to do that. I mean, that was her quote, must have had. And then she goes on and describes what, well, tell us about your kid. Well, he’s a little oddball. I mean, that’s what the kid is. He’s, he sits in his, he sits in his room eight hours a day, no contact with the outside world. Doesn’t come out of his room. Locks his door and stays there for eight hours a day.

Mike Papantonio:             No friends. It’s just, you look at the kid, you go something ain’t right here. And isn’t there parent responsibility there to get involved? You can’t just say, well, he must have had his good reason to go kill all these children. That’s basically where she lands. So I think the idea of being able to proceed in a lawsuit against parents that, you know, it’s, it’s like if I have a, if I mean, I’ll take it down to the real basics. If I’ve got a pit bulldog, I’m responsible for that pit bulldog. I’ve raised it from a puppy. I’m responsible for that. What’s different here? You got a kid that’s a ticking time bomb sitting in a bedroom all day long playing video games, you know, shoot ’em up video games, watching tele. Don’t you have a responsibility as a parent and shouldn’t we put some responsibility over there on the parent? What, what is your take on that?

Farron Cousins:                  I, I, a hundred percent think that we need to be able to hold these parents liable, especially in instances too, where they’re the ones who buy the guns for the kids.

Farron Cousins:                  You know, if the kid’s not 18 yet, absolutely, this should be your liability here. But the parents do need to be trained to recognize some of these symptoms, antisocial behavior, as the DSM-5 points out.

Mike Papantonio:             You know, he’s being bullied, apparently. I don’t know the full story. But he’s so withdrawn, he has no friends. Then on top of that, he goes out with his birthday money and buys an AR 15, ridiculous that he should be able to buy an AR 15 at 16 years old. And moreover, the idea of changing that, changing the, the age that you can do that, that’s something that’s easy enough to fix. Right? But that, that brings in some other points. If you’re gonna buy an AR what about some kind of regulations where you ask, what are you going to use this for? I’m going to use it for hunting. Great. You can use it for hunting, which is crazy. How you use an AR for 15, 15 for hunting is crazy. I don’t think it’s even legitimate. But then you say, okay, if you’re gonna use it for hunting, you gotta take a week long hunting course, come back with a certification saying you finished the course. That’s an impediment, right? Or if you say, I’m gonna use it for self-defense. Great. You have the right to do that. But you have to take this self-defense course that might last two weeks and you have to come back with certification before we can sale. There are all of these impediments that we can put in front of it that you’re not taking away anybody’s rights. You’re just, you’re stepping up the threshold to where we’re not gonna take your gun away, but it, we’re gonna make you be more responsible with it.

Farron Cousins:                  That, that’s the point of this. You know, we obviously, you can’t do anything that is gonna be misconstrued as violating second amendment rights.

Farron Cousins:                  You lose, again, half the country, even though they support these measures, they’ll still be lost on this issue. You get nothing done. So the, the insurance issue, the liability on the parents, the criminal negligence on behalf of the parents.

Farron Cousins:                  If you have a child that is locking themself away every day that you don’t even speak to, to talk about what’s on your, what’s going on, bud? Hey, you’ve been a little, is everything okay? Do you wanna talk to me? I mean, those are things, I’ve had conversations with my kids like that.

Mike Papantonio:             Grandma in this case, in Texas shooting, grandma said, you know what? I think it’s a bad idea. You’re 16 years old and you got an AR 15. Mom doesn’t say word about it. Dad doesn’t say a word about it. So he shoots grandma in the head and then goes around killing children after that. You know, it’s, it’s there’s gotta be some responsibility that the parents take. And if you say you can lose your home, you can lose everything you have because you have a pit bull here. You have a pit bulldog. He’s a child, but he’s same thing. He’s equivalent as a pit bull. That’s what we do, insurance, the law, we make that person responsible. So there has to be a shift in responsibility, I think.

Mike Papantonio:             What I love about all these, this is not my list. This is a list that’s come out through after this, after, after all these events have taken place. But these are things worth talking about.

Mike Papantonio:             Because you can, you can at least begin now. You can do something immediately. You can get something done right now. And this, this is easy enough to do. And so there, at least half of these things could be done very easily and would, would fly through Congress.