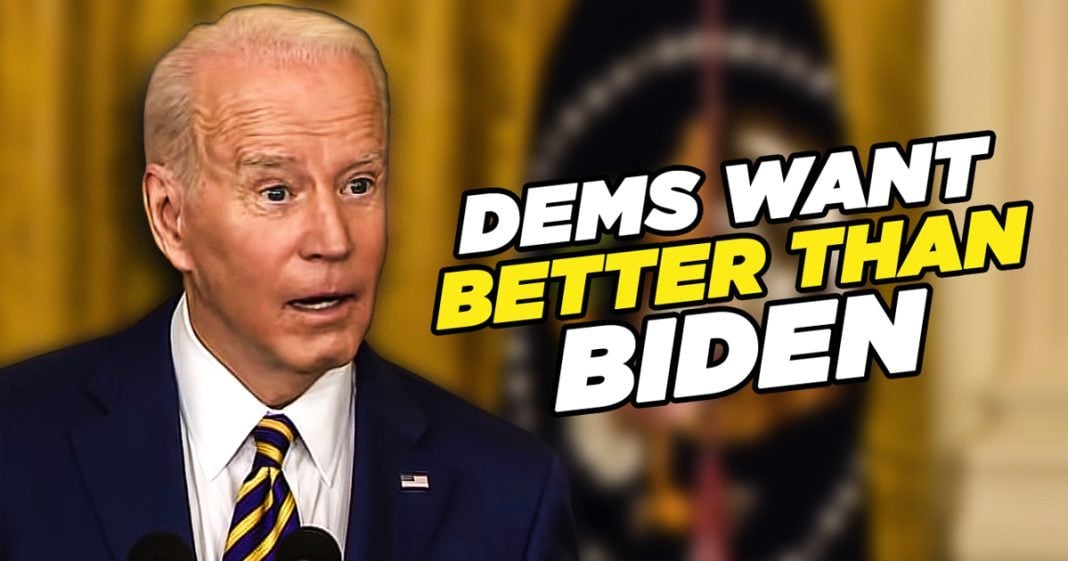 Some Democrats don’t think Biden can win in 2024, so they’re looking for better options before its too late. Mike Papantonio & Farron Cousins discuss more.

Mike Papantonio:             Some Democrats don’t think Biden can win in 2024 so they’re looking for better options before it’s too late. Well, why don’t you lead this, this is, this is a crazy story. The headlines is, the headlines on this story New York magazine, headline is, there has to be a backup. Surely there’s a backup. Isn’t there a backup, right? For 2024. I mean, that’s the headline.

Farron Cousins:                  And those numbers are growing and they’re looking at other people literally from coast to coast. Can we find any breathing human being?

Mike Papantonio:             Biggest donors are saying this. The biggest power brokers that are involved with the Democrats are saying it. All, all the Dem money sources. This is, that’s what the Dems have to worry about. At some point, those sources say, this is not a good bet for me anymore. Let me go ahead and then they secretly by way of all kinds of, you know, all kinds of shell games, they start putting money behind Republicans. I mean, we, we we’ve seen it happen.

Mike Papantonio:             Time and time again. So that’s the risk. Look, he’s the oldest president in the history of this country. Now, if he runs again, he’s 86 years old by the time it’s all over, he runs at 82 years old. It’s just improbable. Now I know there’s people, I love this, you know, there’s people out here listening to this. I, I, they, they put, they put their fingers in their ear. I don’t wanna hear that. It’s too painful. Good God it’s too. I mean, that’s, that’s the worst reaction we can have. Don’t say that Pap, don’t say that Farron, you’re hurting the Democratic party. [ __ ]

Mike Papantonio:             The Democrats are in such trouble. And so we don’t talk about it, but I, honest of God, you’ve got people who watch programs like this and they, there’re so upset that we’re saying something that scares them. And rather than saying, okay, I’m scared, let me go do something about it. They put their fingers in there ear and say, how dare they say this? I mean, it’s almost childlike. It’s like, it’s like eighth grade childlike. But.

Farron Cousins:                  It, it, it is. And we, you know, we, we do see that a lot and we see it with the criticism of Biden, whether you’re doing it, you know, in a video or you’re doing it on Twitter, wherever it is, they don’t wanna acknowledge it. But listen, we, the Democratic party, we, they understand they have a problem. They’re admitting this behind the scenes. You have people that have worked with this administration that have come out of this saying, oh my God, we’ve never seen dysfunction like we’re seeing coming out of Kamala Harris’s office for the vice president. Folks, this, we always talked about the chaos of the Trump administration, which it was, behind the.

Farron Cousins:                  And, and behind the scenes, it was even worse. And I’m not saying this reaches that level, but when you have the people that are essentially pulling the strings on the party telling you.

Mike Papantonio:             It’s what a fourth grader does. So you have to talk about it. Now here’s their reactions. This, these, this is what’s coming from the progressive side. Well, his doldrums are gonna pass. It’s just, it’s just passing through. He’s 82 and you know what, that makes him wise and if he’s 86, he’s gonna be wiser. These are talking points. And his, oh, okay. Here it is. Here it is. Don’t pay any attention. There’s nothing to see here. You know, or, or how, how dare you attack or talk about this story because you’re hurting the Democrats. Let me make something real clear. I ain’t a Democrat and I’m sure as hell not a Republican and neither are you. I mean, I, isn’t that kind of we fall. We fall some, oh, I don’t know what your political affiliation. I guess it’s Democrat, I don’t know.

Farron Cousins:                  You know, a bit of a high society publication coming out of New York. This is not, you know, a random blogger putting out these thoughts. This is what is happening with the party. If you choose to not believe it, then you are choosing to deny reality.

Mike Papantonio:             Yeah. I mean, God bless you. If you wanna go, eh, eh, eh, eh, eh, I don’t want to hear this. Stop this. Stop it. You’re hurting my, you know, if you wanna do that great. But it’s time to pay attention because you’re this close, this, close to seeing a major sea change unless there’s something done about this.