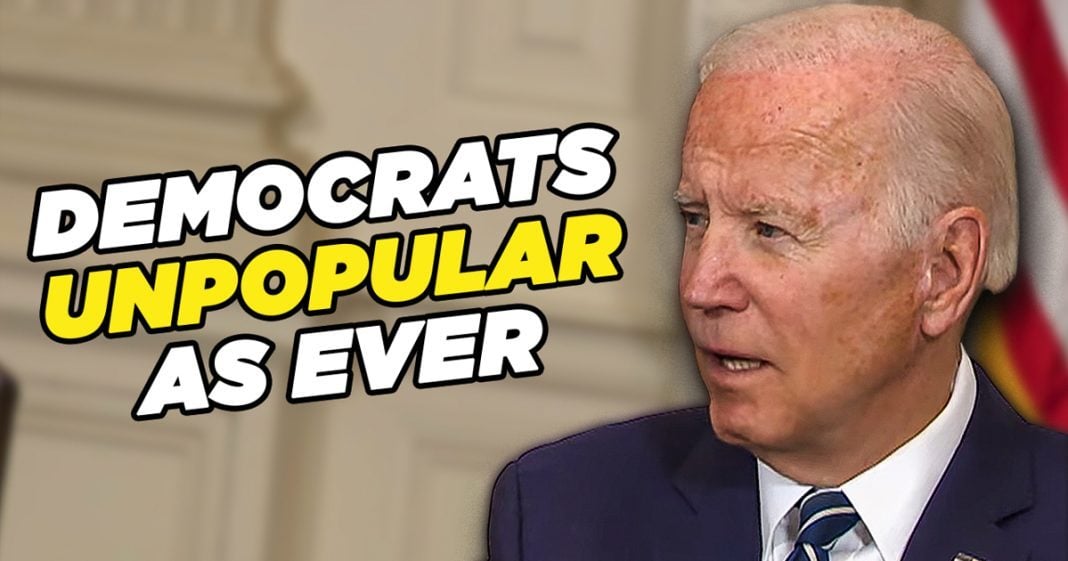 Polls are currently showing that the Democratic Party is just about as unpopular as ever, so how did this happen? Mike Papantonio & Farron Cousins discuss more.

Mike Papantonio:             Polls are currently showing that the Democratic party is just about as unpopular as ever. Uh, God, I, I hate to even say it because every time I talk about the Democrats, oh, that Papantonio he’s moved to the right. Really? No, I’m just trying to tell stories about what everything is being reported, what the polls are showing. Talk about this story.

Farron Cousins:                  And when you have a Republican party that to this day denies the results of the 2020 election, you got the Capitol riot, you’ve got all these nut jobs out there defending white supremacists. And when the general public looks and says, but I still like them better than these, how did this even happen? How is that even possible? I don’t have an answer for that because this is just plain nutty.

Mike Papantonio:             I don’t know that that changes anything anyway, because they.

Mike Papantonio:             They don’t. As a matter of fact, there were some polls that said, if this passes, does it make any difference? And, and the answer was no. It, it did not make any difference. So how do they pull out of this, Farron? I mean, I, I hate to even pontificate about it because then, you know, I’m called this right winger who hates Democrats. Well, I’m not Democrat, I’m not Republican. I’m just calling balls and strikes.

Farron Cousins:                  Right. The, the economy Biden was out there just a couple days ago, talking about how the Democrats are so much better on the economy than the Republicans. The public doesn’t buy it. Right. I, I saw a poll that says, majority of Americans say their paychecks today are actually lower than they were just a couple years ago. That, that’s the biggest issue for America right now. It’s not.

Mike Papantonio:             You know, the other thing that’s showing really strongly right now is people, I call it the, the scared bejesus and that is where people are afraid of what they’re seeing in Ukraine as it seems to be expanding and developing, we just sent $40 billion more. They’re, they’re.

Mike Papantonio:             People, yeah, they’re, they’re just afraid of there’s this, there’s this tension that’s out there that they blame on, on Joe Biden. And in defense of Joe Biden, it ain’t just Joe Biden.

Farron Cousins:                  Well, and here’s the thing and you and I have had these conversations before. People have to understand the Democrats are not in such a bad position right now because everybody’s tuning into Fox news.

Farron Cousins:                  Or because nobody’s watching MSNBC. You crunch the numbers on this, you got less than 1% of the population that is tuning in to, to Fox, MSNBC, CNN, Newsmax, One America, all of those combined.

Mike Papantonio:             That, that, that statement you made is such a powerful statement. We, who, who is it that’s watching MSNBC and CNN and Fox? It is the, it, it’s the folks that are completely committed to their political ideology.