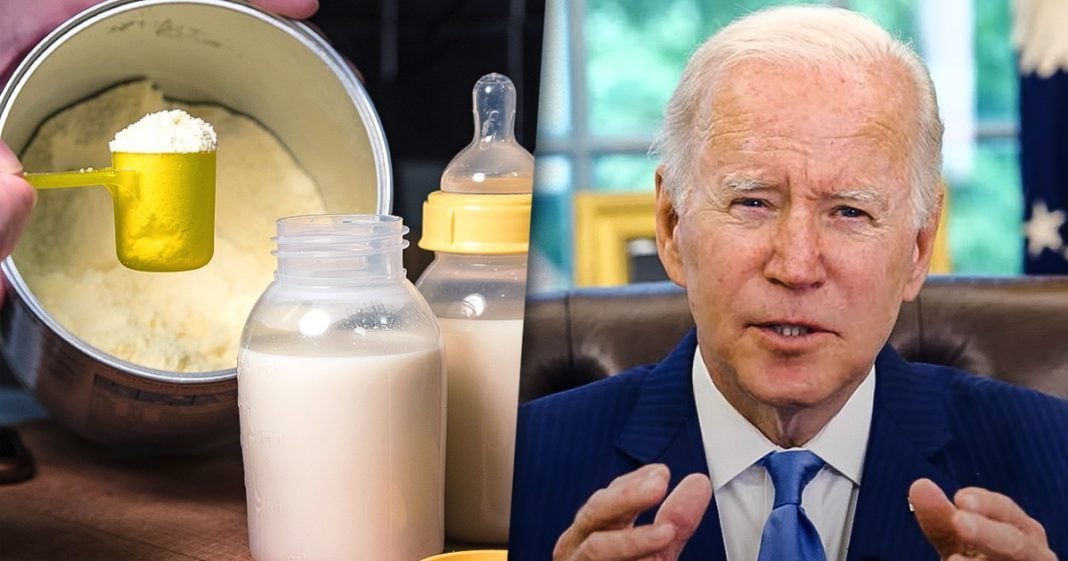 Baby formula remains in short supply in the United States, and the Biden administration is struggling to come up with an answer. Mike Papantonio & Farron Cousins discuss more.

Mike Papantonio:             Baby formula remains in short supply in the United States and the Biden administration is struggling to come up with an answer about why. Ring of Fire’s Farron Cousins joins me now to talk about this and many other issues. You know, as I look at this story, we’ve been talking about the supply chain for a long time.

Mike Papantonio:             There’s some very obvious things and that is, this administration wants to act like it’s not a problem. I don’t know why. They have Buttigieg out there. His, he was on the Sunday talk show saying, well, the reason we have a, a supply problem with baby formula it has nothing to do with government. He said, government, we don’t make, we don’t make this product. It was the craziest response I’ve ever heard. And I think he’s on his last leg. I really do believe this is the second hit for him.

Farron Cousins:                  It, it really is. And you know, he’s, he’s also come out later in the week and said, listen, you know, I, I have twins. It’s obviously a very personal issue for me. So he’s trying to do a little bit of damage control there, but people got the first impression there, right? They’re angry. They’re scared. I mean, people are terrified right now. How can I feed my baby?

Farron Cousins:                  Without this formula. And for anybody that doesn’t have children that may not have gone through this formula for many parents is the only option. Especially if you’re having to send the child to daycare. You know, if, if you’re a father that has a child and, and the mother passed away or, or anything like that. There’s all kinds of situations where, you know, Bette Midler, I’m sorry to, Bette Midler came out last week and said, well, just breastfeed. That solves the problem.

Farron Cousins:                  Yeah. I mean, that’s not an option for many parents. So, they’re scared, they’re angry and they’re wondering, how am I going to feed my child tomorrow? And this administration, unfortunately, they didn’t cause the problem, but they don’t have any answers either.

Mike Papantonio:             What’s really bad for the administration is that this is a microcosm. You see the GOP and they’re already doing, they’re beating Biden and Buttigieg to death. My disappointment in Buttigieg is not coming to the aid of Biden. It’s like, he’s protecting himself. He should be protecting the president.

Mike Papantonio:             You know, if you really, you really think about it, Buttigieg comes out and says, well, we’ve been working hard on this since February. Well, you didn’t tell, you didn’t tell the president because he didn’t know about it until a week and a half ago. Literally that’s, it’s the first time it came to, came to his radar. But this is that microcosm that they can really beat the Democrats to death and they’ve, they’ve grabbed ahold of it already. Haven’t they?

Farron Cousins:                  Right. I mean, this is such a hard political issue to overcome just, you know, in the pure, you know, political standpoint of this. If your opponent is able to run an attack ad saying that because of your failures, babies are starving. It doesn’t get more powerful than that for an American family. I mean, this, this is a huge political problem in an already contentious midterm election race that we have going on right now. I don’t know how you undo this, especially with these midterms, these attacks, the administration, not having a good response to it.

Mike Papantonio:             That’s the problem. Anything you can attack him with in 15 seconds, seconds, is a problem for him and the people around him need to step the hell up.

Mike Papantonio:             And they need to take some responsibility. It’s not his job. It’s their job. Yes, he hired them, but it’s their job. And if they don’t do that, it’s gonna get worse and worse as the midterms approach.