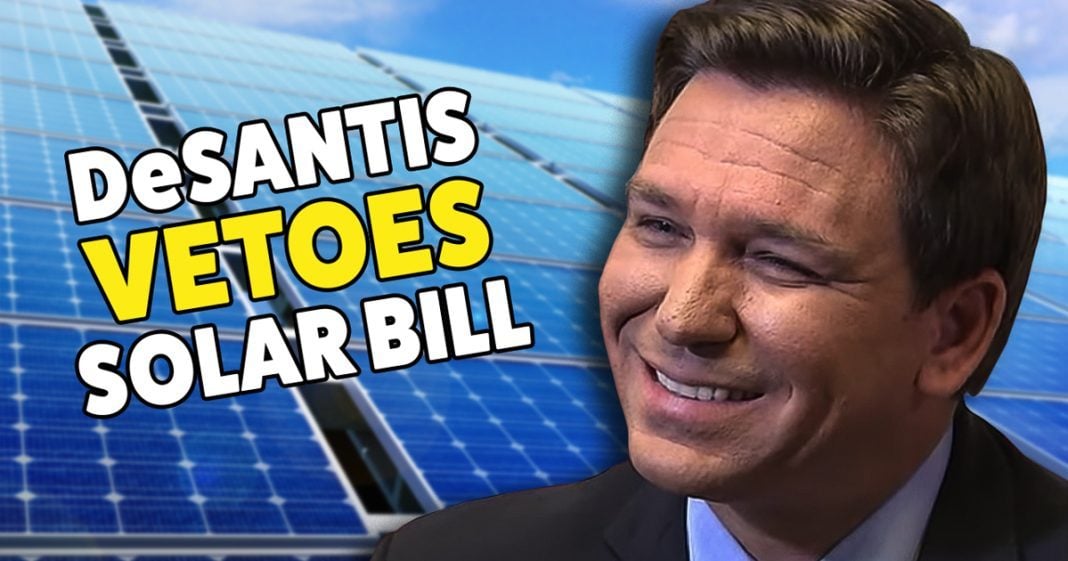 Mike Papantonio:             Wow. You know what, let me, let me take a minute to really tell you what’s on my mind about this. Two of the people in the state of Florida are, one of them, Alex Andrade. His name is Alex Andrade. Now he’s, he’s a representative. He signed off on this. Bradley who’s from Jacksonville, it was her bill in the Senate. What they were trying to do is say, no, you can’t use solar energy because it’ll cost Florida Power and Light money. This is the ugliest story I’ve ever seen. Thank God DeSantis at least said, I’m gonna veto that one, baby. It ain’t gonna make it through.

Farron Cousins:                  Right. I, I, I was shocked when this decision. I had to read it about five times just to make sure did, did he actually do this because this doesn’t seem like something we’d see from DeSantis. But I’ll give him credit where it’s due. This was a good move by him.

Farron Cousins:                  Like you said, here in the state of Florida, we have a law in place that says if you’ve got your rooftop solar panels, which is only 90,000 residents in Florida, whatever’s extra you don’t use, you sell it back to the power company. They give you money.

Mike Papantonio:             What bothered me. Alex Andrade is a punk. Okay. He’s from he’s right from here from Pensacola. He signed off on this. His life experience is almost zero. It, it really is. It’s his life experience is zero. He doesn’t understand that right now, Florida Power and Light has raised the rates so high that a mother of three that used to be paying a hundred dollars a month is now paying $400 a month. To Alex Andrade that was just fine. And you know what? Alex Andrade is in for a really rude awakening with the campaign I’m getting ready to start here.

Farron Cousins:                  Well, and this is, you know, Florida residents that have now been sucked into Florida Power and Light, because they’ve grown their monopoly here, they’re. Left is. The right is. Everybody is angry about this. I mean, personally, I’ve seen my power bill go up by 40 to 50%. Oh yeah. I mean, just in the last couple months here.

Mike Papantonio:             And it’s not just a Florida story. You understand this is all controlled by a company called NextEra. NextEra owns, owns utility companies all over the country. This is taking place in California right now. In California, the Alex Andrade’s of California tried to shut down the solar energy in California too. Now what’s wrong with putting solar panel on top of your house? Do what we’re telling everybody to do. Use green energy. But these guys, no. We didn’t wanna let ’em do that because it was gonna cost the people who are giving us campaign money, it’s gonna cost them money. Bradley from Jacksonville who signed off on this, who this is her bill, she was paid $10,000 by NextEra just to put her name on this. Farron, thanks for joining me.