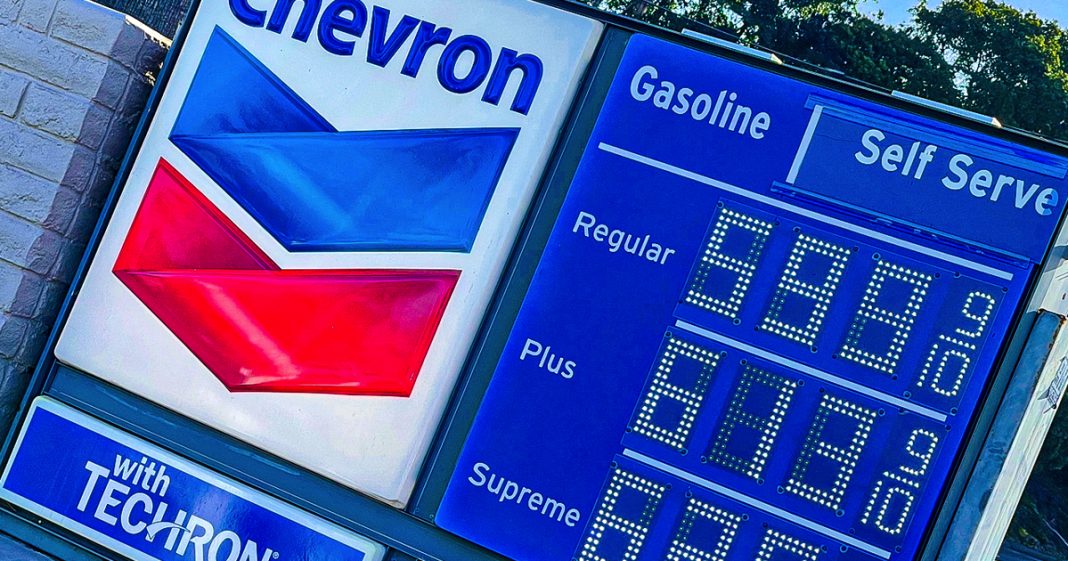 Gas prices are at record highs, but so are the profits of Big Oil – that isn’t a coincidence. Mike Papantonio & Farron Cousins discuss more.

Mike Papantonio:             Gas prizes are at record high, but so are the profits of big oil CEOs and that’s not a coincidence. You know, look, we could go back all the way to the Carter years and the gas, gas crisis back then and we saw the same story. Here’s the problem. This doesn’t have to happen. But Biden can talk about it. He can say, I’m gonna do something. Now we’ve heard the talk. We’ve heard all that. I’m gonna go do something. I’m gonna make this. Nothing happens. You’ve got, you’ve got the federal trade commission that could shut these people down. They could argue, you’ve got a monopoly going on here. You’re price fixing. There, there’s a stack of laws this big, that could stop all this, but you have to have a Department of Justice. You have to have a Federal Trade Commission that’ll actually go do it. Why won’t they do it? I’m interested. I know that’s a surprise question. Why won’t they do it?

Farron Cousins:                  They, they go to work for the industry. The industry comes and works there. Nice little rotation. Everybody wants the big payday after they leave these government services. You make friends with them and you don’t make friends by putting these people in jail. And so that is the biggest problem that we’re seeing with these organizations.

Mike Papantonio:             And the administration is afraid of it. Oh my God, we can’t make ’em too mad because we’ve got midterms coming up. Citizens United has given us the chance to take as much money as we want. Why would we really go after ’em? Look, Biden can talk all he wants. He can talk. He can have his people out front. We’re gonna do that. It’s way past time. Do it. Stop the monopolies. This actually, this could be so important that if they start looking into it, you could actually bust up some of these, some of these monopolies that are taken. This corporate.

Mike Papantonio:             The cartels. Corporate consolidation is nothing different than a cartel, is it?

Farron Cousins:                  Absolutely. And that is what we’re dealing with, especially with this fossil fuel industry. And to me, one of the worst things about this, you know, in addition to them paying themselves tens of millions of dollars in bonuses in January, then extra millions somehow on top of that.

Farron Cousins:                  And they get those bonuses because the company is so proud that they’re price gouging us, you know, in, back into having to ride bicycles 30 miles to get to work.

Mike Papantonio:             Do you know when, on the look back to what Carter did, Carter, you know, first of all, Carter was the most misunderstood president. He was a very decent president. I mean, he really was. But it was the same problem that he, he, the same problem was he would talk about it, but then he didn’t have agencies and regulatory that would execute on it. And back in that those gas crisis, had they gone ahead and done it, then we wouldn’t be having the problem we have now because in MBA school, they’d be talking, hey, let me tell you the history of what happened when we did this. It opened up this big, this, this big box of uglies where they went, they came after us for anti-trust, collusion, all sorts of things, price gouging. He didn’t do it then and it’s the same thing happening all, all over again.

Farron Cousins:                  So even higher than it was now, but that is the largest increase in gas prices that we have ever seen in history. And everybody kind of forgets that because oh, well we had these conflicts in the Middle East. No, we started wars in the Middle East and now these oil companies are looking at Russia and Ukraine and they’re saying, we can use this to our advantage. Not only can we use it to just raise prices because why not?

Mike Papantonio:             Blame, you know, blame, the blame game seems to relieve everybody because most people don’t take the time. I mean, we have to do this. We, people watching this program, you know, they don’t, they’re trying to live their lives. Right. They’re trying to make ends meet. They’re trying to go to school or work and raise a family. They don’t have time to look behind the stories. I don’t blame ’em for that. But I think a lot of times we have these types that count on that and we have government regulators that count on that. Nobody’s gonna find out what I did. Here, this could have been done all the way back in the Carter administration and it wasn’t.