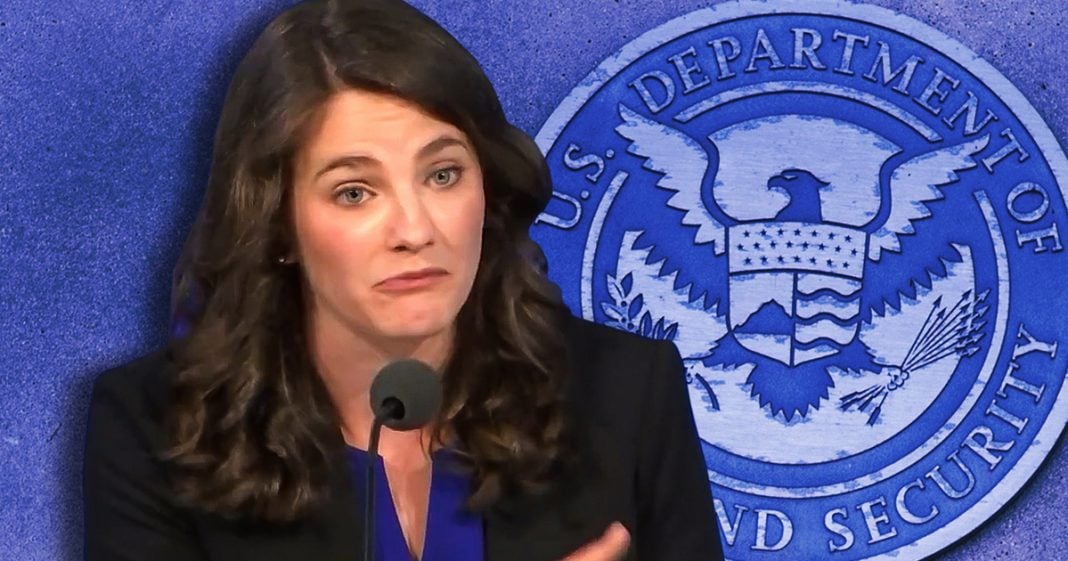 The Department of Homeland Security is about to start cracking down on what they consider to be misinformation, but this program could easily be abused to shut down dissent. Mike Papantonio & Farron Cousins discuss more.

Mike Papantonio:             The Department of Homeland Security is about to start cracking down on what they consider to be misinformation, but this program could easily be abused to shut down dissent. Ring of Fire’s Farron Cousins joins me to talk about this and many other issues. Farron I, I, I think you have covered this whole misinformation issue more than most progressives and you’ve done a great job understanding. First of all, you and I, I think you, you know, when we first started looking at, at this, I concluded it’s not constitutional. I, I really do believe somebody’s gonna test it. It’s not, it’s not constitutional because you can’t create something that interferes with the vibrant free speech that we’re all entitled to. Now, there are exceptions. Don’t get me wrong. There are exceptions and the exceptions fall with what we call the police power, health, safety, and welfare. So they’re trying to hang it on national security and we’re gonna do this because it, when we start looking at this, my prediction is it’s gonna fail. Somebody’s gonna test this, but take it from there.

Farron Cousins:                  It, it, it’s a very stupid idea. I, I think is probably the nicest way I can say this. You know, is misinformation a huge problem? Absolutely it is. And we know that. We’ve known that. But you cannot have the government come in and say, okay, we’re now in the business of telling you what’s real and what’s not, what is allowed and what isn’t. You know, that’s kind of the slippery slope that everybody had worried about, you know, with, with online, you know, bans and things like that. This is the culmination of it and this of course is a massive problem. The government cannot and should not tell us these things. And the thing I wanna point out is each side, you know, left and right, both of them think, we’re the good guys.

Mike Papantonio:             Well, let, let me be a little small here. I gotta be. The woman they’ve put in charge. This Nina Jankowicz is a complete nut case. I mean, I, she’s been called an clown and everything else and, and you know what? She kind of deserves it. Go back and just take a look at some of the videos this woman’s done and you conclude the woman ain’t right. And so it’s not only that, but, you know, you have to have, if you’re gonna do it, at least do it with somebody who’s neutral. What do we know about this woman? We know that she’s joined the hip with Hillary Clinton. She was her cheerleader. She was Biden’s cheerleader. And all that does is gives ammunition to the conservatives to say, this is a joke. Not only is it constitutional, but you have this nut case, they call her the Mary Poppins of disinformation, this Jankowicz woman who’s running the show. It’s, it’s, it’s a little scary.

Farron Cousins:                  Well, it really is. And, and then again, back to the decision to even do this, what a horrible time for this administration to come out and announce the creation of this. We’re in a midterm election. Biden’s approval rating is horribly in the toilet. Democrats are struggling. Republicans have captured every narrative possible.

Farron Cousins:                  So they come out and say, okay, well, what if we crack down? No. What a stupid time to sit, to give Republicans the opportunity to say, look, here’s the censorship we warned you about.

Mike Papantonio:             You understand, that’s right around the corner. And so, so, so look, here’s, here’s, here’s prob, here’s the problem I see. Government is the absolute worst about getting it right. And you have this, this, it fuels distrust by the average American. You’ve got, look, I mean, go back, win, we’re, you know, we’re winning in Afghanistan. We heard that. We heard the argument they, they, we’ve got weapons of mass destruction in Iraq. We’ve heard that Putin is responsible for the supply problem in the United States. Putin is responsible for the gas problem. Putin’s responsible for inflation. We, we’ve learned, you know, these are things that are, they’re promulgated by part of the government for purely political reasons. Or the Chinese lab leak that it’s racist to even talk about it. When you see this again, and again, and again, the, the public starts saying I can’t trust any of it. And so we’re gonna see that really bad with this thing I think. I think this is gonna take off and we’re gonna see the edge of yeah, I told you so. And I think the Republicans, I mean, you know, these conservative Republicans are gonna use this as a hammer.

Farron Cousins:                  Well, absolutely. I mean, the first time this group comes out and slaps any kind of disinformation label on a conservative outlet, a conservative news reporter, conservative YouTube video, at that point, they’re gonna use that as really the, the flash point, the rallying point to get everybody on board with them saying, look at this, the government is trying to shut me down. They’re trying to take away my free speech.

Farron Cousins:                  And that is why any kind of targeting of misinformation is very difficult because you have a right to go out there and spread misinformation. People may not wanna hear that, but the government cannot stop you from doing that.

Mike Papantonio:             Yeah. I mean, censorship, I mean the big picture, censorship is to democracy what lynching is to justice. I mean, that’s really the equivalent that I see. That’s how bad this is. Now, we, you and I, granted we are extreme where it comes to censorship. We say, you know, you and I have talked about this a lot of times, it’s just dangerous. The market will take care of itself. People will figure it out. But you have to put it out there. And as I look at this right now, and I don’t think Biden understands, but his, the, the rap, the, the rap on him right now is that he’s probably the strongest censorship president. I mean, John Adams, they, they equate him to John Adams for God’s sake.

Mike Papantonio:             You know, who wanted to shut down the media. So I don’t think this is a good move. I don’t think it’s, I think it’s just gonna give the conservatives more ammunition. By the way, you know, I get these comments, Pap must be a real Republican conservative, would you please defend me? That’s ridiculous. I mean, that is so absurd. But you know what we try to do, we try to tell, call balls and strikes. Right?

Farron Cousins:                  Right. And, and that’s something people have to understand. You know, I get, I get that a lot all the time too with some of my stuff, because sometimes the truth is not flattering for your side.

Farron Cousins:                  Sometimes the facts don’t line up with what you’d want them to do. And that’s what we always try to do. We tell these uncomfortable truths, and it’s not because we hate you. It’s because you gotta open your eyes and, and that is exactly the opposite of what this program is doing. And listen, if you want the, the people to be able to spot misinformation, invest in education programs, train them to do research, to read books.

Mike Papantonio:             I see comments that, as crazy as it is, you and I have been working together what 18 years? Something like that, we go all the way back to, to what was Air America. Where we were the only progressives out there. It was Al Franken. It was Janeane Garofalo. It was Sam Seder, Bobby Kennedy. It was Cenk Uygur. I mean, we, this incredible mixture of progressives, that’s where we started. So when these boneheads write in, they say, you know, Pap he’s, you know, crazy right wing conservatives, or, you know, you do, God forbid you do a story where you actually call balls and strikes, these snowflake types write in and say, oh man, he’s just one of them. You know, write in say that .I don’t care. But go do a little search before you do that.