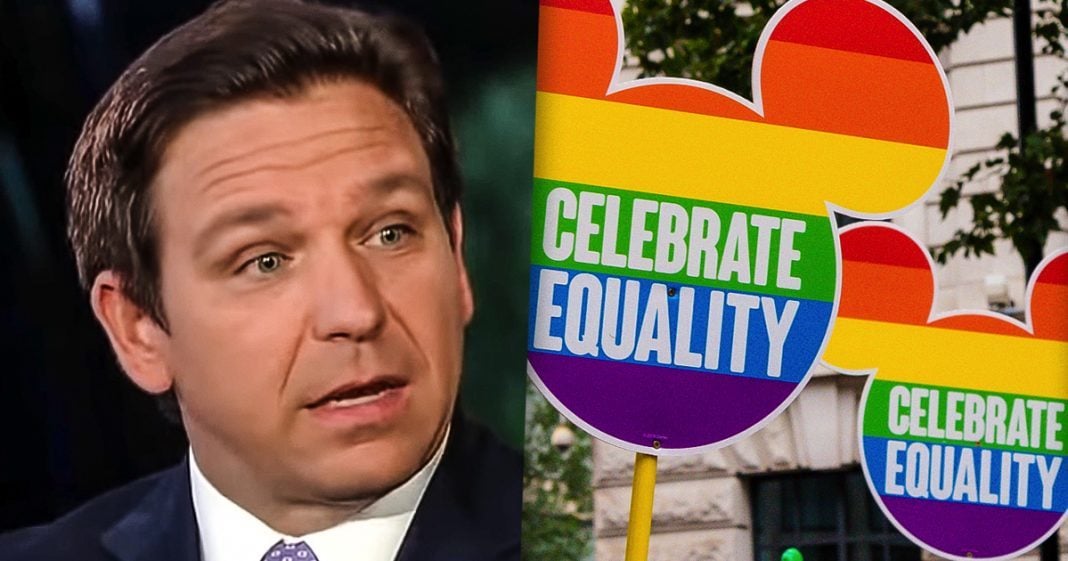 Ron DeSantis attacks Disney and you know what, if you take a look at it, the question is, are Florida taxpayers liable for some of the attack. It’s, it’s a complicated story.

Mike Papantonio:   But at the same time, look, here’s what DeSantis comes out. DeSantis says, I don’t want you messing with our politics. You’re coming down to Florida. We’ve given you all of these gifts. We’ve given you 40 square miles. Now understand 40 square miles is what Disney controls. And so, so DeSantis says, why is it that everybody has to pay taxes, but you don’t. That’s where the story starts, right?

Farron Cousins:       Well, and, and Disney actually is paying taxes. They’re paying, you know, hundred, over a hundred million in taxes. And DeSantis was perfectly fine with Disney funding all of these same people that voted for this bill, hundreds of thousands of dollars to get these same people elected, who wrote this legislation. But then when they came out after of course public backlash, then Disney says, okay, we, we don’t support it now. Then suddenly they draw this ire, which of course is, is a little more than political retaliation. The problem is Disney’s not the one who’s having any problem. Disney’s gonna be just fine. They could actually end up saving money.

Mike Papantonio:   I’ve, I’ve heard that argument Farron, but I want you to think about something. Okay. The argument is that you have, you know, a billion dollars worth of bonds that Disney sold those bonds to make improvements. You follow me. On 40 acre, I mean 40 miles worth of, of territory, they say they sold bonds to make improvements. Point is this. The argument we’re hearing is, oh, now taxpayers are gonna be responsible for those bonds. They’re not finishing the story though. The rest of that story is if you control the bonds you control what you can tell Disney to do. You can tell Disney, I’m sorry, I’m glad you invested in these roads, I’m glad you invested in this sewage, but now we’re gonna charge you more for the use of that. That’s where there, the argument is not being, is not being completed. The people who are against this, and there’s, there’s a lot of reasons to be against it, but there’s a lot of reasons to be for it. It’s corporate welfare that bugs me about Disney. We’ve always allowed their corporate welfare in this state. And, and, and.

Farron Cousins:       Well, we certain, we certainly have. And look, you know, getting rid of Disney’s special privileges, I, I have no problem with that. The reasoning behind it, absolutely. The effect on taxpayers, yes. Because the Reedy Creek county or district, whatever it’s called, is what held those bonds.

Farron Cousins:       Those bonds now have to go to Lake Buena Vista. They have to go to all the other counties there and somebody has to pay it. And here’s my other thought on this too, Disney, no longer has to spend hundreds of thousands of dollars a year buying the big dogs. It’s a lot cheaper to go and buy off a board of county commissioners.

Farron Cousins:       You can pay them off so much faster than a state legislator.

Mike Papantonio:   It’s a very good point. The point is if you control the bonds, it’s not just a liability. That’s the point I’m trying to make.

Mike Papantonio:   But the, the, the argument that’s being made is kind of a stupid argument. The argument that’s being made by the people who are so upset that DeSantis has done this. It’s the same folks. They hate DeSantis. They hate Republicans. They hate. It’s, it’s the same hate speech. But the point being, they’re not making the right argument, the argument, oh, these bonds are gonna cost a billion dollars. Well, the people who hold those bonds control those assets too, and they can, they can increase the cost of the assets to Disney and Disney will pay it.

Farron Cousins:       Well, which is, you know, why I always make that point. Disney’s gonna start saying, well, we don’t have to send our money to the state.

Farron Cousins:       Many more local people and Disney, I’m telling you, they’re gonna come out on top of this.

Farron Cousins:       And everybody else gets screwed.