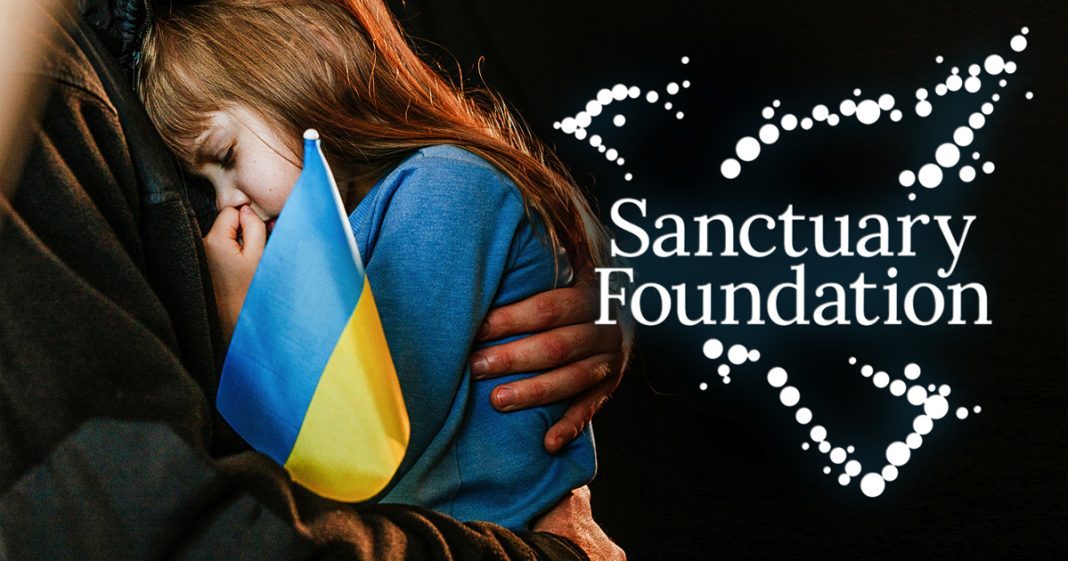 5 million refugees are fleeing the Ukraine without much of a plan to tell them what we’re going to do to help them, as they leave that war torn country. Mike Papantonio is joined by Donniya Davies from the Sanctuary Foundation to talk about what we can do to welcome Ukrainian refugees into our community.

Mike Papantonio:   5 million refugees coming out of the Ukraine without much of a plan to tell them what we’re gonna do to help ’em as, as they leave that country, that war torn country. So what do we do? Well, I have got the expert with us, it is Donniya Davies and she’s, she’s been at this for a very long time and she can help us better understand what it is we can do. A lot of times what ends up happening Donniya is we know sometimes a problem is so big that we, it, it’s almost like we can’t, we can’t get our arms around the problem. You’re talking about the aspect there’s very specific things we can do.

Mike Papantonio:   There’s, there, there are very specific things we can do to welcome Ukrainian refugees into our community. Right now in the United States that’s not really happening.

Mike Papantonio:   We’re hearing a hundred thousand refugees are coming. There’s no sign of that so far. Pick it up from there. What, what is it that we ought to be thinking about as this develops?

Donniya Davies:      Thank you, Mike. I can only explain what we’re doing in the UK with Sanctuary Foundation. What we’re trying to do is we’re trying to work alongside the UK government that have actually proposed 200,000 Ukrainian refugees coming to the UK. What we’ve done is we’ve gone out to the public and we’ve said, who wants to be a part of this? And within moments and weeks we’ve managed to get 30,000 people that are individuals, businesses, civil groups, universities, schools, that have said, we want to build community and help these refugees, to match hosts with these refugee families. And what it is is it’s a simple approach of community to community, where we actually get a community of Ukrainians that have been living in humanitarian centers in Poland or in Moldova or in Romania and what we do is we transplant them almost into a community in the UK.

Mike Papantonio:   And when you say community, that means a home. I mean, they, they, they have a home. Somebody says, we’re not just gonna bring you into our home, but we have, we’ve also lined up a job for you.

Mike Papantonio:   You can work here, here or here. So in the United States, that’s really the starting point to me is I think about what it is we can do. Right now in the United States of course, we’re confronted with the idea we’ve got immigration issues coming across the border and because of that, people are saying, well, they’re almost shutting down where it comes to saying, well, how do we bring in more refugees from the UK? I mean, excuse me, from, from the Ukraine. But the point is this, there’s very specific things we can do.

Mike Papantonio:   Right now in the United States we’re faced with a work shortage. If you go to restaurants or you go to many, many organizations and they say, we can’t get, we can’t get enough people to stock ourselves. We can’t get enough people to even work in this restaurant. And it’s happening across the board, it’s happening in white collar settings where we need, we need people who can, who can operate at a very high level from a managerial standpoint, they can’t even get those folks. So isn’t this a perfect time for us to be thinking about how do we bring Ukrainian refugees into the United States in an organized kinda way?

Donniya Davies:      Absolutely. A lot of these refugees are actually working in some of our centers in Poland. We’ve got fulfillment centers that are like Amazon warehouses, and they’ve come and they’re volunteering and we’re employing them. You know, there’s global empowerment mission that is out there. They’ve got warehouses fulfillment centers and they have got Ukrainian people that are working, operating them. We’ve got students that were medical students that are coming and working. These are extremely hard working, very, very lovely people that need homes. They need to be loved. There needs to be education, schools for these children of, and families and businesses that need to come together and work alongside the US government to create community to community approach.

Donniya Davies:      That’s not gonna happen because they’re overrun with, if you think about it, it’s 5 million people that are displaced. And 5 million people when you think about it, when are we ever gonna see that in our lifetime? And so we have to decant these borders. So when we look at the, the borders, they are full, these centers are full. They stay there for a minimum of two days before they’re then taken to other centers where there are people from various countries that are saying, come to Norway, come to Switzerland, come to, to Germany, come to the UK, come to Canada.

Mike Papantonio:   Which is wonderful because what they’re trying to avoid is predatory conduct.

Mike Papantonio:   You know, we had this, this case that we followed here in Georgia, where they had 2000, basically prisoners being held up in Georgia, they were immigrants. And simply there as labor. Well there’s, there’s the, there’s the labor predatory. There’s the sexual predatory. All of those things were on the table immediately. So at least there’s some organization where a country’s coming in and saying, come to Canada, we’ve got a job for you. We have homes for you. And at this point right now, the US is kind of way behind on that, aren’t they?

Donniya Davies:      I’m afraid so. I don’t know of one organization that’s actually doing what we’re doing, working alongside the UK government. And we’re quite happy to share ideas and what we’re doing and help the US. We’d love to be able to do that.

Mike Papantonio:   Thank you, Donniya. We’ll, we’ll try to do what we can on our show to try to promote what you’re trying to accomplish. Okay.

Donniya Davies:      Thank you so much. Thank you.

Mike Papantonio:   That’s all for this week, but you can find all of these videos on YouTube channel at youtube.com/theRingofFire. The videos are gonna be posted throughout the week and you can follow us on Twitter @americaslawyer. I’m Mike Papantonio and this has been America’s Lawyer where we tell you the stories that corporate media won’t tell you because they’re advertisers don’t let ’em tell stories like this or their political connections don’t allow for it. We’ll see you next week.