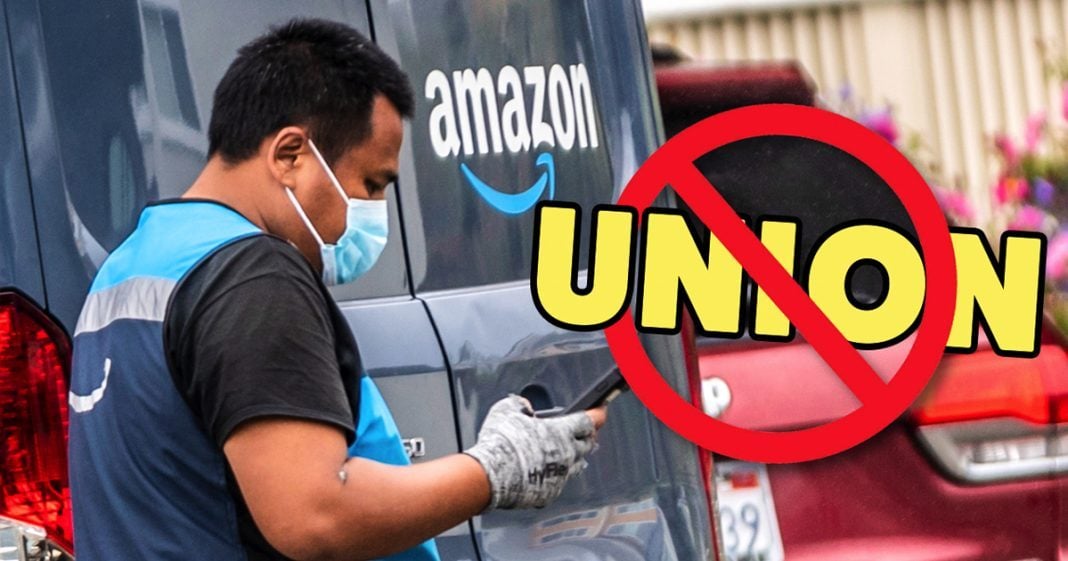 Amazon is so scared of their workers forming a union that they’ve banned words like “union” from the company’s chat app for workers. Mike Papantonio & Farron Cousins discuss more.

Mike Papantonio:             Amazon is so scared of their workers forming a union that they’ve banned words like union from the company’s chat app for workers. You know, you, you actually picked this story up, I think before most people in, in the media, and you were reporting this a long time ago. You were saying something’s getting ready to happen in the union movement with Amazon and we started seeing the real edges of it, right? We saw what happened in Alabama, where they shut down the union process. But here, this is so ugly. This is, this, this app is going to say, you can’t use these words. What are the words they can’t use in the app?

Farron Cousins:                  In there. You know, I think like things like comradery or, or this is concerning and I do have to give full credit, obviously Ken Klippenstein with the intercept.

Farron Cousins:                  And they will and honestly, I think a bigger part of the story here too, is you’re gonna have an app that Amazon basically controls and says, hey, workers.

Farron Cousins:                  Y’all get on there and talk to each other. If you think they’re not gonna big brother this crap and pay attention to every single word you say, you are kidding yourself. This is so they can spy on people with it, making them think like, oh no, this is just so you can give a shout out to your buddy over here, who did a great job.

Mike Papantonio:             And, and so, so this is their statement. We’re doing this, this is Amazon, because our teams are always thinking about new, new ways to help employees engage and improve their lives. Okay. This, so, so they’re gonna come up with app, but oh, by the way, you can’t use the word pay raise, compensation. You can’t use the word petition, prison. You can’t, I can’t, I couldn’t make this up.

Farron Cousins:                  Yeah, you, you can’t use any of these words. You can’t use it for union organizing. And of course their big concern is, you know, just a couple weeks ago, this massive victory where a union for the first time was formed with an Amazon warehouse. Chris Smalls, who we have talked about many times, he is the one they said back in the day, let’s make him the face of it. Let’s try to paint him as this crazy person trying to form a union. Well, Chris Smalls beat you, Amazon. And now you have all of these other Amazon warehouses that are reaching out to Smalls saying, do for us what you’ve done there. So he may have been fired, but he won in the end.

Mike Papantonio:             It’s inevitable. It’s gonna, they’re gonna unionize. The, you know, Amazon needs to get behind it. They need to make, do it in a way that’s cooperative. That is sustainable. This is not the way to do that.