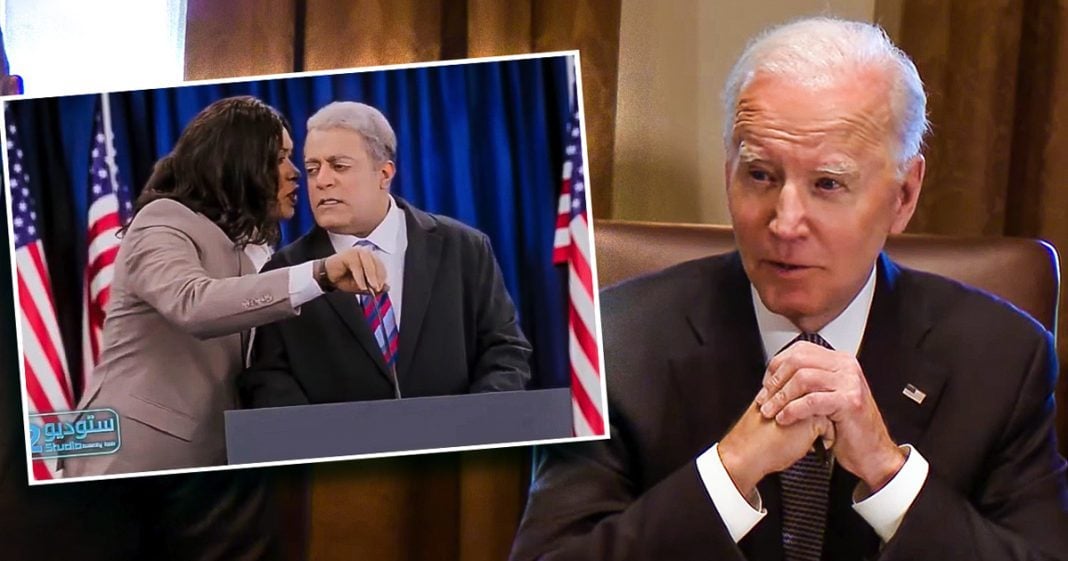 President Biden’s approval rating is getting worse by the minute and his embarrassing behavior is now being mocked on TV in places like Saudi Arabia. Mike Papantonio & Farron Cousins discuss more.

Mike Papantonio:             President Biden’s approval rating is getting worse by the minute and his embarrassing behavior’s now being mocked, couldn’t make this up, it’s being mocked on TV in places like Saudi Arabia. Okay. So we have this relationship with Saudi Arabia, which is a joke to begin with. That it’s the most horrendous administer, they’re just a cabal of psychopaths there in Saudi Arabia, but we have that relationship anyway. But Biden now has gotten to the point, it’s almost become such a laughable situation. They actually are doing TV segments of, of Biden and it ain’t a very pretty picture.

Farron Cousins:                  Right. It’s, you know, I, I guess kind of their Saturday Night Live version of it. They played this clip of him falling asleep halfway through, Kamala having to wake him up and talking nonsensical, not really forming even complete sentences and.

Mike Papantonio:             Well, they took, they took off on, there was a, a couple of weeks ago, White House, he’s giving a speech and he starts off in the speech, he says, I wanna, I wanna talk about America and I wanna use one word to talk about America. And then he goes off in like in a trance talking about his trip in the Himalayas. I mean, point. Here, let’s take a look at it. It’s, it’s, I couldn’t make this up.

Farron Cousins:                  I, I don’t even really know how to, how to respond to that clip because it really does make no sense and, and let’s be clear, if Trump had done something like, hell, when Trump did do things like that.

Farron Cousins:                  We, we would do segments on it and all of that. So fair is fair. You gotta call this out because again, that is not normal behavior. That is not okay. We’ve got a man who, who can’t follow his own train of thought. You know, something is clearly not clicking here. This isn’t necessarily a, haha, look at the crazy old man. This is a, guys we gotta understand there’s something wrong here.

Mike Papantonio:             Yeah. We got a national security issue. You know, there’s a movie. I, I love this movie. It was called Being There. And the, the idea of it was, it’s Peter Sellers movie and he, he’s this character Chauncey Gardner. Now the family dies that he’s the gardener in the family. The media comes in and he’s the guy out in the garden working. He’s got, you know, he’s got some mental problems. He got some serious mental problems, but all of a sudden everything he says, the media embraces and says, this is absolutely brilliant, Chauncey Gardner. I don’t care what it is. It could be as absurd as you wanna make up and Chauncey Gardner sounded brilliant. I wonder whether they’re gonna start doing that with this guy, because there’s, that’s the only way to make it look like everything’s okay because I gotta tell you something, that clip we just watched, I could go through dozens and dozens of them on this show and it’s, it freaks me out just a little bit.

Farron Cousins:                  Well I think right now people are starting to pay attention to it. You know, about a week or so ago we get the reports about Dianne Feinstein.

Mike Papantonio:             And that’s, that’s what we’re seeing. I mean, God bless him. He’s been at it a long time. He’s paid his dues. He’s just, he just, he’s too old for this job and he’s already seriously talking about running again in 2024. I, the other, the other shot the Saudis took was on, was on Kamala Harris.

Mike Papantonio:             I mean, that was a pretty ugly shot that they did with her. I mean, she looks like a total buffoon too. So you gotta wonder.

Farron Cousins:                  Well, and this administration should look at that and say, look, why are we giving them hundreds of millions of dollars in weapons that they turn around use to commit genocide in Yemen? And this is how they treat us. Look at, they’re not our friends.