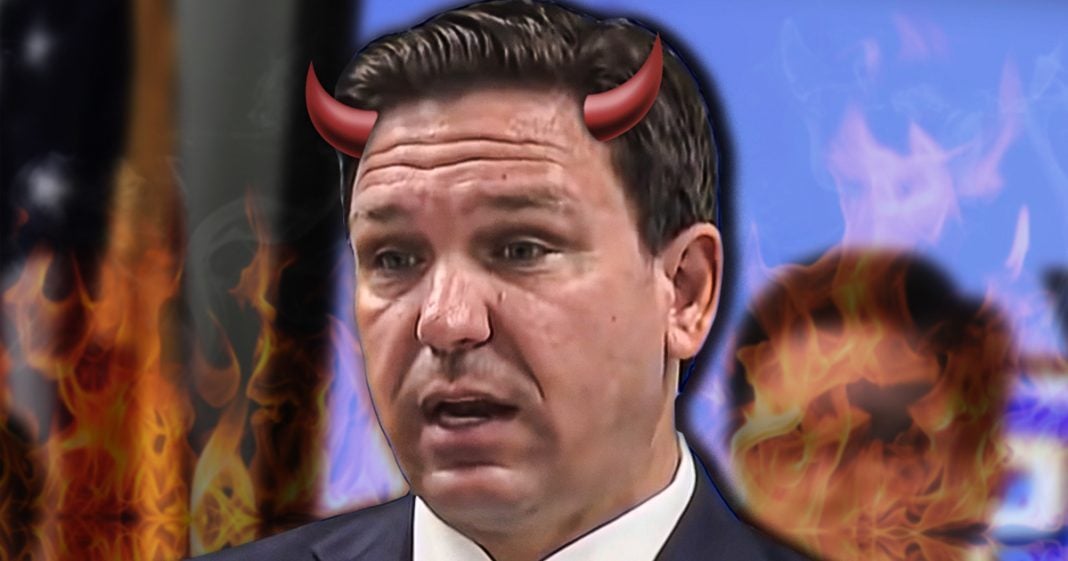 The state of Florida is working to become one of the most oppressive states in the nation, as Republican Ron DeSantis continues to stress culture war issues. But behind his assault on our rights lies an economy that is in utter shambles, with more and more workers and residents struggling to stay above water. Ring of Fire’s Farron Cousins discusses the sad state of Florida with investigative journalist Jordan Chariton of Status Coup News.

Farron Cousins:                  The state of Florida right now seems to encapsulate everything horrible happening throughout really the entire United States, the attacks on the LGBTQ plus community, the economic problems that average Americans are suffering from every day, creeping authoritarianism, all of it right here in the state of Florida and of course elsewhere throughout the country. But we here, we’re kind of getting it a little bit harder than everybody else and recently, Jordan Chariton actually took a trip through this state, interviewing people, talking about all of these issues and Jordan Chariton with Status Coup news is here with me right now to talk about that journey. So Jordan, thank you for, for coming back on the show. I, I’ve watched the videos you’ve put out, just kind of in a broad sense, lay out what brought you to Florida in the first place?

Jordan Chariton:               Yeah, I actually went to school in Tampa, so, I’ve kind of kept a close eye on, on things in Florida. And, you know, to me, I’ve seen a lot of the culture war coverage out there, but not a lot of connections to the economics because in my view, all these culture war distractions, which are actually hurting real people like LGBTQ people are just smoke screens to numb the masses to, in Florida rent is going up 30 to 50%. Inflation in Florida is above the national average. And these, these things are not just unique to Florida, but to me basically governor DeSantis has been weaponizing fake issues for his, you know, obviously presidential ambitions, but to also just distract from the economic hunger games going on in places like Florida. So I thought it important to go interview the LGBTQ community that’s gonna be affected by the, don’t say gay bill, which he just signed, and other issues, including the housing crisis in Florida.

Farron Cousins:                  Well, yeah, because, you know, you make a really good point here. We, we, we do have all of these culture war issues happening here in the state of Florida and of course elsewhere, you know, this is not just to say Florida’s the only place. But, you know, also the attacks on, on critical race theory, you know, the legislation banning that from places where it never even happened to begin with. The LGBTQ attacks, other attacks on teachers, you know, now claiming anybody who opposes these kinds of things, they’re groomers. But all of it masks the deep problems that are happening with the residents here in Florida and, and the rent issue, right? The housing price issue is something that I do, you know, luckily see some people bringing up every time Ron DeSantis sends out a tweet, you know, people will comment, not many, but some of them say, hey, rent went up 30%. What are you doing about this? And there’s of course never a response to it because all he’s doing is show boating. Like, look at me addressing these issues that aren’t actually issues instead of looking at the absolute dissent into, you know, hell that the economy here in Florida really is, is heading to. And that’s where we are. That’s what we’re looking at here. I mean, people are suffering both from the legislation and just from horrible economic policies that are wrecking this state right now.

Jordan Chariton:               Absolutely. And people should remember, Florida got hit one of the hardest states by the financial crash. It was kind of ground zero for the foreclosure crisis over a decade ago. You know, the narrative has been, we, we’ve recovered from that, but people I spoke with in Florida have never fully recovered from the housing crisis, the financial crash. Then you add in a pandemic, and now you’re adding in gas, food, wall, Florida becoming Wall Street’s Disney World. 60 minutes, I was surprised, had a recent piece about Wall Street, basically buying up all these houses. Cash offers, as soon as the houses get listed from Wall Street investors, and then, you know, they throw in 10 to $15,000 in remodeling and then jack up the prices, 40, 50%. So all of these things are happening.

And frankly, a lot of people look to Florida to move there because, you know, no state income tax, lower taxes. But people I spoke with who said, that’s part of why they moved there, including the weather are now talking about, we gotta, we gotta find somewhere else, because we’re getting priced out of here. And then, you know, you just look at it, frankly, Ron DeSantis is using LGBTQ students as basically collateral damage to push his agenda. I mean, I, I interviewed some LGBTQ high school students down there and make no mistake, this does not just affect kindergarten through third grade. That’s the conservative line. There’s language in the bill that’s very vague, says or, you know, deemed age appropriate, which could extend to any age schooling as far as what topics could be discussed, taught as far as LGBTQ. But students were telling me, literally we’re all on antidepressants and a lot of us are suicidal, that’s before this don’t say gay bill.

And now adding onto that, them being afraid of, you know, discussing their same sex parents. So not afraid to discuss their family in school. One, two people that are LGBTQ I interviewed are basically homeless, they’re couch surfing because their families won’t accept them. And now school was the one place that they felt safe to be themselves. But now in school they’re essentially gonna be, you know, spiritually homeless because they can’t just be themselves and they have to walk on eggshells, what can be discussed. So all of these things together, the, the economic pain and then essentially the target on oppressed communities, black people included, is, is basically a mass distraction to what I’m calling the economic hunger games. Biden can call this a historic economic recovery, but I’m talking to people down there, they’re facing eviction. I’m talking, you know, the LGBTQ students who they, they too care about housing and other things. They actually criticize the Republican party, but they also criticize the Democrats for not fighting hard enough and emboldening the Republicans with this culture war stuff. So yeah, there was a lot, a lot of different issues we covered while down there.