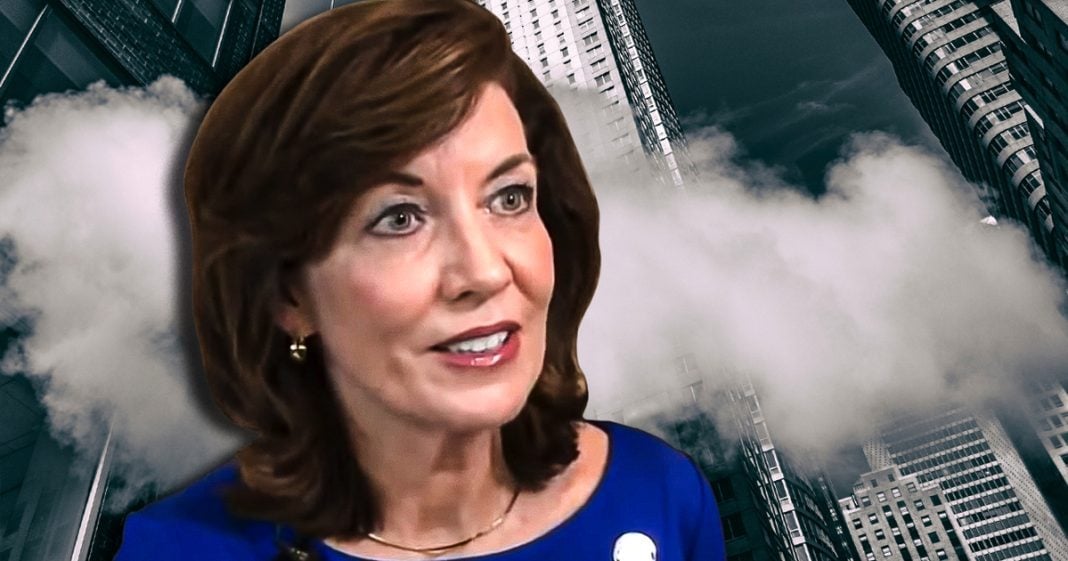 New York Governor Kathy Hochul is finalizing a plan to “decarbonize” buildings in her state. Carbon and other emissions from buildings using gas for electricity is one of the top sources of emissions across the country, and states are being forced to tackle the problems on their own since the federal government isn’t doing much of anything to solve the problem. Ring of Fire’s Farron Cousins talks with Panama Bartholomy, executive director of the Building Decarbonization Coalition, about the problem and the progress being made.

Farron Cousins:                  New York governor Kathy Hochul is poised to actually help decarbonize buildings in the state of New York. Now that may seem a little bit confusing to some folks, but luckily I have a guest with me right now who actually runs an organization, the executive director of the building decarbonization coalition. I’m joined now by Panama Bartholomy. I, I hope I pronounce that correctly. So, Panama, thank you so much for being here today. This is such an extraordinary issue that people really don’t think about, but, but the numbers, what your organization is doing, absolutely sorely needed here. So let’s start by talking about the building decarbonization coalition. What exactly is that?

Panama Bartholomy:       First all Farron, thanks for having me on the pod. Long time listener, first time caller. So it’s good to be here. So building decarbonization, I think nobody thinks about that. Usually the types of work that we do that people think about is how they’re comfortable in their home, how they’re cooking their food, how their showers are great and how their clothes get dry. And so what we’re concerned about is that behind many of the households ways that they do that is a significant fossil fuel and is significant from a perspective of local air quality problems and it’s significant from a perspective of trying to fight climate change. And so this term, decarbonization, it’s really, it’s a pretty wonky term that really speaks to how do we still have the same or better quality of life, but do it while having a significantly reduced impact on the environment. And so our organization really helps the industry, it helps government agencies and it helps households find ways to do that.

Farron Cousins:                   And you’ve got some wonderful ads that are now running, really highlighting this issue. And, you know, in just a moment, we’re gonna get deeper into that New York issue. But, again, I do want to touch on the fact that what people don’t seem to, you know, think about very often as you’re talking about, you know, the comfort in our home. When you have homes that are actually powered directly by fossil fuels or buildings, of course, powered directly by fossil fuels, we’re talking about the burning of these fuels, the consumption of them, the conversion of them into energy on site, which means that these emissions that come from this aren’t from some far off factory in the distance. It’s coming from your property. And this does create a lot of residential and even commercial emissions, you know, right there where you live, where you work and people don’t seem to think about it. Right? Oh though the power plan is way, way over there. You know, I, I’m not, I’m not in the harms way of all these fumes. Well, eh, you’re not exactly as safe as you would think here.

Panama Bartholomy:       Yeah, absolutely. And it’s a big issue in large metropolitan areas as well. Because when you burn natural gas or methane, methane makes up about 90% of all the natural gas that we use, when you burn that it produces basically three things. It produces, nitrogen oxides, which is the major precursor of smog, carbon monoxide, which is why you have carbon monoxide monitors in your home and then formaldehyde as well. And you want to get those out of your living space or outta your workspace as quickly as possible and so that’s why every home that burns gas in it for heat, it has vents that gets it up into the atmosphere. And unfortunately we’ve never really thought through what that meant for large metropolitan areas. And so we’ve done a ton of work about reducing emissions from power plants and from cars over the last four decades.

And we’ve done almost no work about reducing pollution from buildings. And so, I’m based out here in California, myself, and we have five of the worst air basins for air quality in the country and out here because we’ve done so much work on power plants and cars and not on buildings, the burning of gas in buildings is producing five times more smog than our entire fleet of power plants and twice as much as cars in car crazy California. And so it’s good that you bring us up because it’s a really significant issue in our major metropolitan areas.

Farron Cousins:                   And it’s certainly timely too, right? I mean the issue of energy consumption is clearly on everybody’s minds right now, mostly obviously with, with gasoline prices going, you know, haywire. And everybody saying, oh my God, what do we do here? Well, the answers to a lot of these problems, not just with the automobiles, but with, with the building, with the fossil fuel power plants, with the coal burning, with the, you know, fracked gas, with all of this, the solutions have been in front of us for a very long time. We as a country are not adopting them to the level that we should be and that is the ultimate goal with all of this, is we can with the innovation with revamping the power grid, we can make this into where this isn’t that much of an issue or hopefully in the future, not an issue at all for us. But we have to have that initiative. We have to have that drive as a full country to actually get us there. And, you know, we, we still do not have that yet.