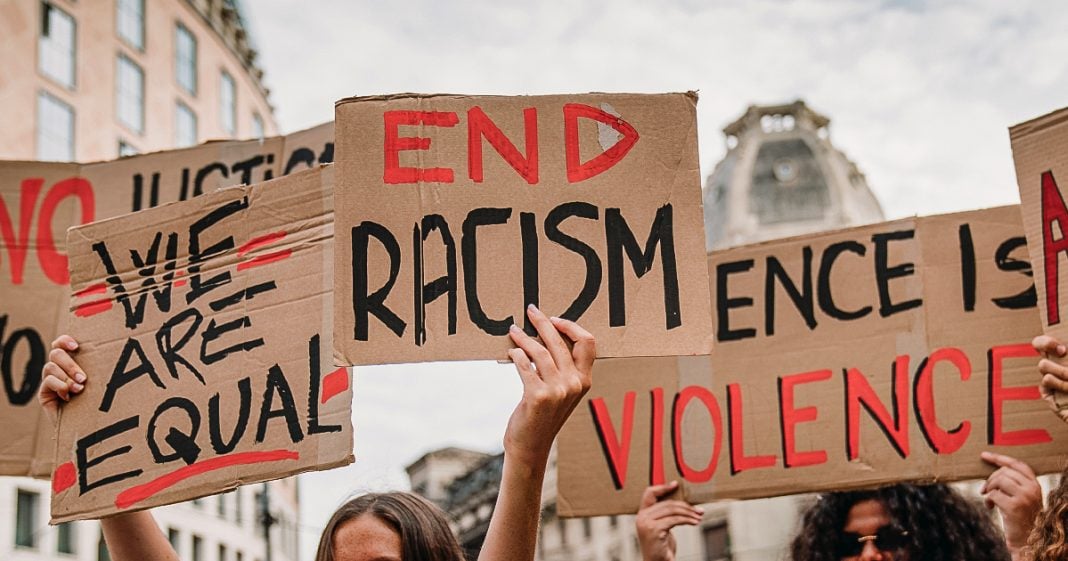 Donald Trump is not responsible for racism in America. But his ascent to the presidency undeniably gave racists in the United States all the permission they needed to wear their hatred and bigotry on their sleeves. The mask has been torn off, and we are now seeing how deeply the hatred in this country runs. Ring of Fire’s Farron Cousins talks about how all of this has happened with author and Salon.com contributor Chauncey DeVega.

Farron Cousins:                  Donald Trump rose to power in part because he played on the white fears and insecurities among what was at the time, not a huge portion of the population. But after several years of fomenting this just racial hatred, really, among his base and allowing its to spread and grow, this racism has almost become a tenant of the official Republican party at this point. They’re no longer trying to hide it. They actively believe that the white people in the Republican party are the victims and everybody else are the aggressors. Joining me to talk about this is Salon.com contribute, contributor, Chauncey DeVega and Chauncey of course, he has his own podcast as well. He’s been a great friend of the show for many years. So Chauncey, welcome back to Ring of Fire.

Farron Cousins:                  And you know, I, I go to Salon.com pretty much every day, every time I go there, you’ve got a piece up. So I don’t know how you’re able to churn these things out so quickly. It’s phenomenal and I love it. So let’s chat though. You, you’ve had a couple pieces recently that I want to talk with, including one, you know, about a conversation with Joe Walsh. So let’s, let’s start there because Joe Walsh, as we all know, came, came to power as part of the tea party movement back in 2010. But even though maybe his politics haven’t changed so much, he does recognize what the Republican party has become. So, so tell us about that.

Chauncey DeVega:           The enemy of my enemy is very often going to have to be my friend. And that’s a lesson a lot of these liberal progressive, quote un-quote, pro-democracy types with their purity tests are gonna have to learn. Joe Walsh, tea party Joe Walsh, anti Obama Joe Walsh, now truth teller Joe Walsh. I think he is one of the premier truth tellers now. Former he’s an unabashed conservative. He owns his lineage. He owns his relationship to the Republican party and that monster that it has fully become in terms of full on embracing of white supremacy, terrorism, January 6th neo fascism. And he and I had a series of conversations, a lot of wonderful truth telling there. And the basic point being, this is an existential struggle for this country. The Republican party, these Neo fascists, the Republican fascists, whatever you wanna call them, will just destroy America, instead of compromising.

They will destroy this country and we have public opinion data on this actually in terms of white Trumpists and other Republicans embracing fascism. If they’re going to be forced to share any type of political, social, economic, and other power black and brown folk, instead of leaning into the futures, Joe Walsh and I discussed, Donald Trump, the Republican fascist who idolized an adored of Vladimir Putin. They’re willing to burn it down to restore some fictive MAGA golden age where white folk like them, at least in their minds, ruled over every area of American life. That is the existential struggle we’re in. And unfortunately too many of our white brothers and sisters, especially these white suburban centrist Democrat liberal types, they are not prepared to embrace that truth. They’re in deep, deep, deep denial.

Farron Cousins:                 They, they really are. And you know, we, we do see inklings of this coming out and I wouldn’t even say inklings, you know, it’s full blown an assault right now with the legislation coming from Republicans at the state level. You know, they’re, they’re not trying to hide it anymore, you know, and the, the critical race theory hysteria that they have essentially created has lead to like what we see here, where I am in Florida, legislation that says you can’t make white people feel uncomfortable about racism. I mean, my God, that, that’s a real thing here in this state, a piece of legislation that is probably going pass that, no, you can’t make white people feel bad or feel uncomfortable by talking about racial issues because, because white people are clearly the victims. You know, we, we, we don’t want to have to deal with this or address the atrocities that happened throughout American history. No, no, no, no, no. That’s your problem and you’re not gonna project that onto us, white people, here in Florida. It, it’s insane. It truly is. And, and unfortunately not enough people think that it’s insane I, I’m afraid.

Chauncey DeVega:           I’ll even go farther, you know, social psychologists and others have highlighted this. When we’re looking at these intersections of whiteness and this type of mass public behavior into some, the lunacy of saying you can’t even make white folk uncomfortable. That’s beyond white privilege. This is a type of mass psychopathology. Think about what they’re saying, that they are so fragile that to tell the truth about this country will put them in a state of narcissistic injury and they have to protect their precious white children from the truth. It’s also a form of child abuse, by the way, when you really think about it, you’re not equipping your children intellectually, emotionally, psychologically, spiritually to deal with reality.