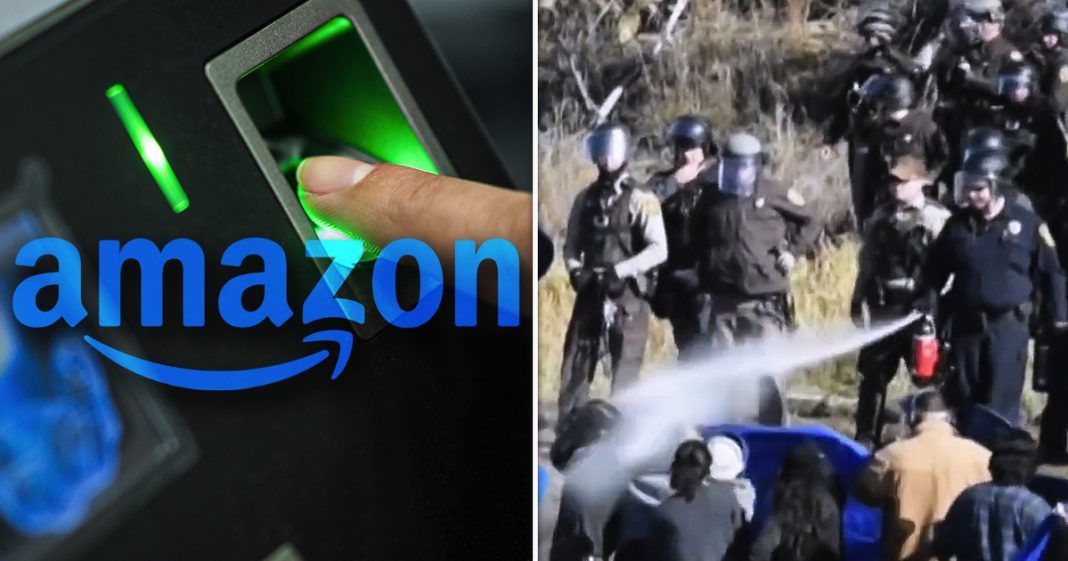 Via America’s Lawyer: Amazon has been quietly collecting biometric data from its employees using thermal cameras and facial recognition software – all in the name of its COVID-19 health checks. The practice has since prompted a class-action lawsuit. Then, a judge orders the energy company behind the Dakota Access Pipeline to publicly disclose their use of private security groups against protesters. Mike Papantonio & Farron Cousins discuss more.

Mike Papantonio:             Amazon has been quietly collecting biometric data from its employees using facial recognition software and its COVID-19 health screenings is where they’re getting that material. The practice has prompted a class action lawsuit. Now, a US district judge has ruled the tech giant can’t run from those allegations. Farron Cousins joins me to talk about that. Farron, listen, as you look at this story, you, it seems like every, at least once a month, we’re doing a story about the ugliest edges of Amazon and I, at first I thought, well, maybe it’s just hitting all at one time. Maybe all this crazy stuff that Amazon’s doing, maybe it’s just, we’re gotta move through it. That’s not the case, is it?

Farron Cousins:                  No, absolutely not. And, and this one is particularly disgusting because they put these safety measures in place saying, look, employees, we’re gonna protect you from COVID. We’re gonna make sure nobody comes in here with an infection. So go put your face up to the machine. We’re gonna scan you. It’s gonna take your temperature. You’re gonna be totally fine. And so the workers said, okay, yes, that sounds great. You’re protecting us. But then they find out, oh, Amazon’s not just testing your temperature, they’re selling your facial data, your biometrics to third parties. And this is something and this class action’s being filed in Illinois, which is one of the strictest.

Mike Papantonio:             Yeah. And there’s about, there’s about 10 other states that this could be filed. This, this is, this is an important decision right here to be able to say, yeah, we’ve got enough to go forward. What a corporation always tries to do is they try to cut it off at a motion to dismiss because motion to dismiss, if the judge agrees, slows down discovery, you can’t take depositions. There is no discovery. But if you get past this, you’re able to sit them down in a room and beat the hell out of them in a deposition and get to the bottom of it. Amazon’s got a problem here.

Farron Cousins:                  Yeah. And, and what’s most likely going to happen is that they’re probably gonna end up settling. Facebook got popped for the same thing in Illinois, $650 million settlement Facebook had to pay out for essentially doing the same thing. And the really disturbing part about this Amazon story is okay, they’re taking their employees biometric data, but they’re also implementing other biometric policies. They’re trying to do facial recognition for all of their drivers. And they’re saying, listen, this will make sure that no unauthorized person gets in the car. Nope. We know now you want to sell it. They’re doing it at Whole Foods. They wanna make it to where you just scan your palm print to check out so you don’t have to use cash.

Mike Papantonio:             Yeah. And, and, and the biometric thing right now ties a lot into health information. We’re seeing, we’re seeing the Chinese just do everything they can to get as much health information on American citizens as they possibly can. There’s a reason for that. They, they, they can sell it. They can use it to devise their own programs. So this whole thing about being able to manage biometrics is, is critical and finally, we have a federal judge who says, says, yes, it is critical and we need to stop it. And in Illinois, that’s the place to fight it out.

Farron Cousins:                  It absolutely is. And hopefully, you know, I, I’m confident these workers should be able to prevail. I mean, you know, this seems like a pretty cut and dry case. And again, Illinois, super friendly because of their very strict laws.

Mike Papantonio:             And, and if it doesn’t work there, like I say, there’s seven, eight other states that the same thing could happen.

Mike Papantonio:             Finally tonight, some good news. A judge ruled last week that the company behind the Dakota Access Pipeline can’t keep their use of private security secret. The things that they’ve done with their private security groups. They’ve gotten tons of information about people who simply want to say, we want clean water. We don’t want this pipeline to destroy our entire ecosystem. We don’t want it to destroy our entire waterways, our subterranean waterways. I, I love, I love this decision.

Farron Cousins:                  I, I, I think it’s absolutely very important because we know and unfortunately last week too, a judge dismissed a lot of the police brutality claims by the protesters. But TigerSwan was also a part of this and TigerSwan is the company hired by Energy Transfer Partners who owns the Dakota Access Pipeline and what they were doing according to their own, you know, documents is they wanted to treat these protesters, people who wanted to protect the environment, they wanted to use what they called counter insurgency measures. Basically treat them as if.

Mike Papantonio:             Well it’s being, this was led by a former commander of the Delta Force, TigerSwan was, and he put into place the same things that they would be for containment for just street terrorists, potential, potential terrorism movements taking place in the street. How do you shut it down before it gets outta control? And so, so what ends up happening is the argument is that these are public records. You know, you can’t protect them. As a matter of fact, they gave these records to a public entity and the public entity says, we have them now. You can’t have them back, right?

Farron Cousins:                  Yeah. And so TigerSwan is probably not gonna be in legal trouble, I would say, you know, unfortunately the, the judges in this country are so skewed against any kind of environmental issue that we see these protestors, these activists constantly losing in court. But TigerSwan has been exposed and sometimes that it’s the best you can hope for. That’s the best that you can get out of a story like this. And hopefully going forward too, these people who, who endured what they described as torture, remember they were sprayed with water hoses in sub-freezing temperatures.

Mike Papantonio:             God, they have rocks thrown at them, they had bullets flying over their head.

Farron Cousins:                  That was being carried out against people because they wanted to protect our water.

Mike Papantonio:             Well, like I said, the guy running the company was commander in Delta Force. So he said, well, we can do this to civilians too.

Mike Papantonio:             That’s all for tonight. Find us on Twitter and on Facebook @facebook.com/rtamericaslawyer. You can also stream us live on YouTube, and be sure to check out RT’s new portable app, where you can watch all your favorite shows. I’m Mike Papantonio and this is America’s Lawyer where every week we tell you the stories that corporate media is ordered not to tell because their advertisers won’t let them and because their political involvement doesn’t allow to for it. Have a great night.