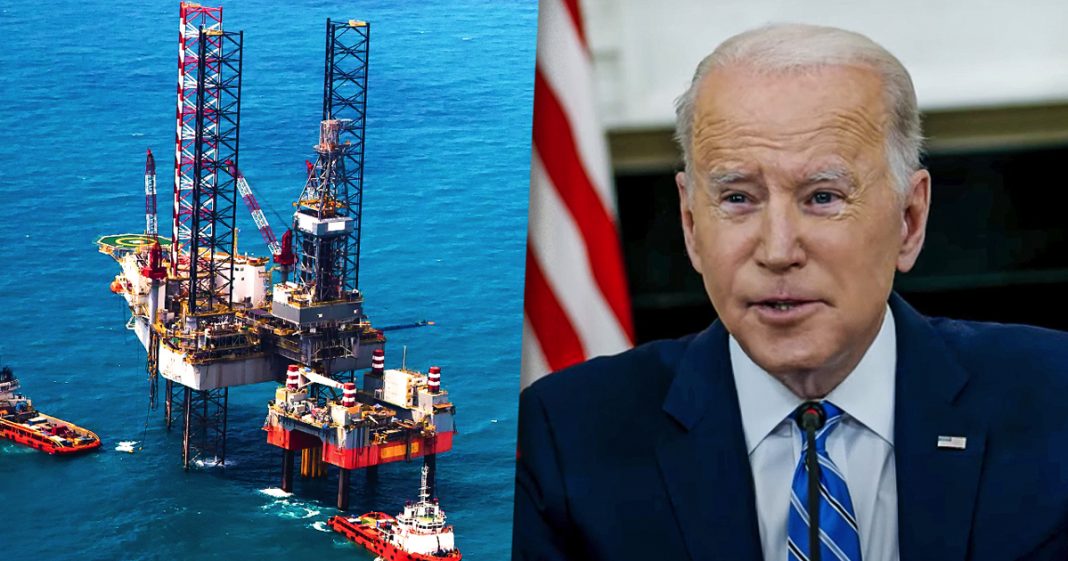 Via America’s Lawyer: President Biden has doubled the number of oil drill leases in very sensitive parts of this country, a move contrary to his campaign promise. Mike Papantonio & Farron Cousins discuss more.

Mike Papantonio:             Finally tonight, some good news. A federal judge has halted president Biden’s oil and gas drilling leases in the Gulf of Mexico, a move that’s long overdue. Wow. Who has this guy? Where, who, where is, where is Joe Biden? This, who is this guy that’s calling himself Joe Biden? Isn’t Joe Biden the guy that came in and said, I’m gonna reverse every thing that Trump did handing out all these leases? And it comes to find out Biden has doubled the number of oil drill leases in very sensitive parts of this country that Trump said, no, we’re not gonna allow.

Farron Cousins:                  Yeah. And, and this is absolutely a, a wonderful victory here because this judge came out and said, wait, you’re basing all of your assessments here on how much damage this is going to do on assessments from several years ago, first and foremost. But most importantly, these were done by fossil fuel insiders.

Farron Cousins:                  You can’t use these numbers. You’ve gotta go back and actually do the environmental assessments. So that tells you how just, I don’t know if the lazy is the right word or corrupt, but this Biden administration is. Because sure, Trump’s the one who put a lot of these in place, Biden expanded it, but then they didn’t even bother to see whether or not these environmental reviews were, were adequate.

Mike Papantonio:             Let me tell you one thing that’s really should be disturbing to everybody. The Biden administration is blaming this on judges who said that you can’t, you, you can’t do certain things. You can’t stop oil leases. Federal judge said that and Biden says, oh my gosh, our hands are tied. Ridiculous. That is so crazy and such a lie that it’s off the scale. So he goes about, Biden administration, goes about doubling, doubling the number of oil leases that he’s granted in places like right off the shore of our little town here in Pensacola, in the Gulf of Mexico and it’s all over the country. I mean, really, really important areas, sensitive areas, where they’re gonna now drill.

Farron Cousins:                  Right. And we’re still dealing with areas of the Gulf of Mexico that clearly have not rebounded, probably will never rebound from the 2010 BP Deepwater Horizon disaster.

Mike Papantonio:             That’s all for tonight. Find us on Twitter and on Facebook @facebook.com/rtamericaslawyer. You can stream us live on YouTube and be sure to check out RT’s new portable app, where you can watch your favorite shows. I’m Mike Papantonio and this is America’s Lawyer where every week we tell you the stories that corporate media is ordered not to tell because their advertisers won’t let ’em and because their political associations don’t allow for it. Have a great night.