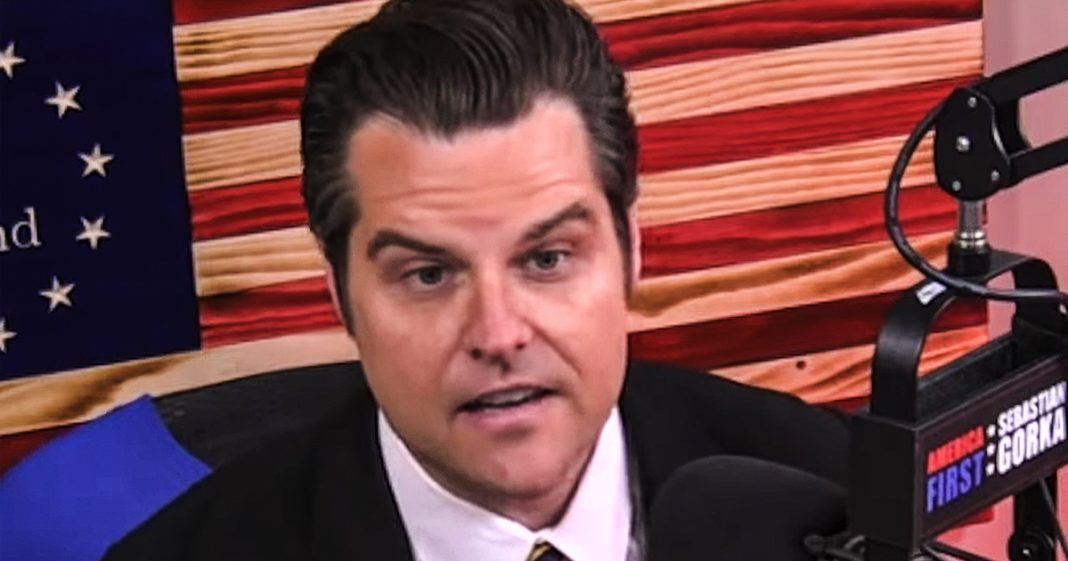 Mike Papantonio:             Congressman Matt Gaetz is feeling the pressure as more of his former friends agree to cooperate with federal prosecutors. Farron, I don’t know, I don’t know anybody in America or the world who’s reported more on this story. I, I always ask you, I said, okay, so when is the other shoe gonna fall? I’m not seeing it. This, this story. It, it’s interesting. You got Big Joe Elliot. Talk about Big Joe Elliot hearing the phone call and I’ll talk, I’ll talk to you about what the legal problems are.

Farron Cousins:                  Right. Well, well see here and this is what I’ve said on my show plenty of times here is that, you know, Ellicott comes out, he gets popped for his own, own crime unrelated to anything Matt Gaetz.

Farron Cousins:                  But as part of his plea deal, he agrees to cooperate in other investigations, which does include Matt Gaetz. And he says, listen, I was in the room when you had Joel Greenberg make the call to Matt Gaetz saying, you and I both had sex with an underage girl.

Farron Cousins:                  Right. It, it doesn’t mean a whole, unless he’s got the evidence to back it up because, you know, if you have nothing to go on other than this guy who’s been popped for another crime.

Mike Papantonio:             Here’s, here’s the big problem. Here’s the big problem. The Department of Justice is gutless. Okay. Unless it is low hanging fruit that they can grab and run with, they’re not gonna do anything with this. I’m telling you. They’ve got all of this indicia of something wrong, like the two payments for $900 to, to, to pay to hit up, hit up being the 17 year old girl during a time where Matt Gaetz is, is 36 and the girl, 36 years old, the girl is 17. So, so if you look at this, it’s interesting, but you don’t have a Department of Justice that’s going to say, okay, I think I can work through the problem that we didn’t hear, we don’t know what’s on the other end of, of the phone. Could be anybody.

Mike Papantonio:             All of it is hearsay. We can match the phone records. We can do things like that. But at the end of the day, what do they call him, Big Joe Elliot?

Mike Papantonio:             Big Joe Elliot, who is one of, one of the, run around friends with, with Greenberg, they’re best pals. They’re talking about the 17 year old. You gotta, you still have to tie that up.

Farron Cousins:                  Right, exactly. And, and another thing though that works against Matt Gaetz right now and I think this is probably the bigger fish, is that his ex-girlfriend of course has agreed to cooperate with prosecutors in exchange for not getting hit with obstruction of justice charges and of course she was dating Matt Gaetz during all of this. Apparently based on what I can tell, I guess they had an open relationship. You were allowed to, you know, have other people come in. And so if she was there, of course, and has any kind of corroborating evidence, which is the part people always wanna forget about, then yeah, that’s bad for Gaetz. But I get a lot of people that do reach out and say, why have they not arrested Gaetz yet? Why is this still going on? Well, we have all of this, you know, we, we’ve seen, what’s kind of out there.

Mike Papantonio:             There, there are, there are good lawyers that could probably make a case out of this. But what you see with the Department of Justice, if, if they can’t win it cold, where it’s all there handed to ’em, they’re not gonna handle the case.