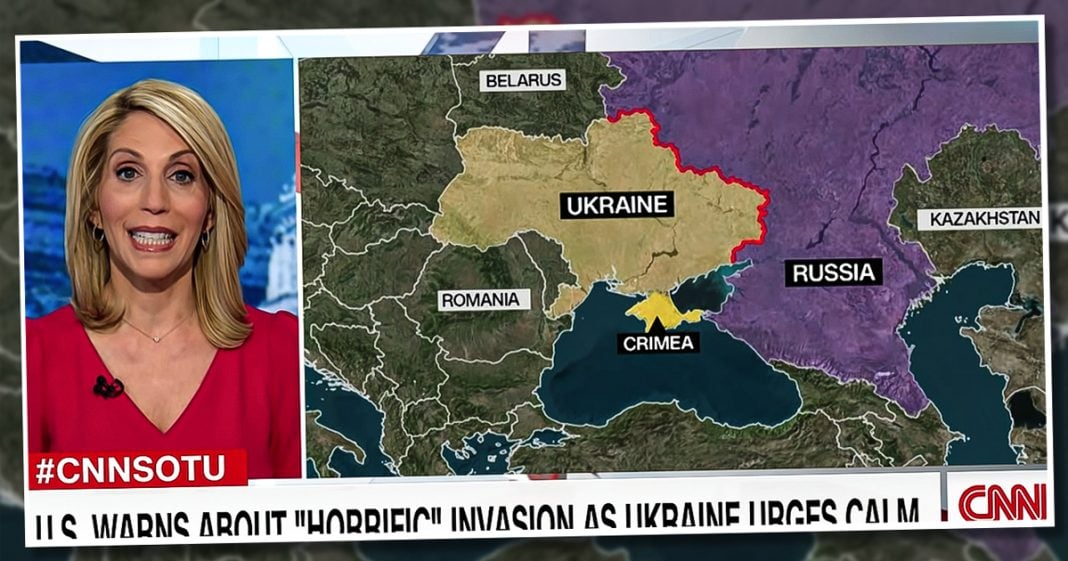 Via America’s Lawyer: Russia and Ukraine have repeatedly insisted against military escalation along their border, yet the U.S. is preparing to send troops to appease the usual congressional war hawks. Mike Papantonio & Farron Cousins discuss more.

Mike Papantonio:             The United States is preparing to send troops and weapons to the Ukrainian border and the war industry couldn’t be happier even though almost 70% of the American public say it’s a mistake. Farron Cousins from trial lawyer magazine joins me to talk about it right now. Wow. All the big corporate media they’re celebration. I mean, they love, they love big profits that come from war death, don’t they?

Mike Papantonio:             We saw it with Iraq. You remember where, you know, MSNBC and CNN had these big maps on the floor and we’re gonna send our troops here and there. It, it was glorious, just glorious day, you know, this same thing’s happening here, isn’t it?

Farron Cousins:                  It, it, it is, you know, it’s, it’s almost just like history repeats itself over and over again. You, you see CNN out there pushing this, the, the tensions between the United States and, and Russia, and is Russia gonna invade Ukraine and Ukraine is actually telling the US like, we.

Farron Cousins:                  We don’t need you here. We don’t want you here. They, Ukraine of course, they announced, you know, we want to beef up our military by about a hundred thousand people. But last we heard they’re telling the US stop. But the US is doing what they do. They want these tensions to ramp up and it’s because the people behind the curtain want it to ramp up. It’s big buck, it’s big bucks.

Mike Papantonio:             Lockheed, Lockheed Martin, Raytheon, this is big money for them. This is their heyday. We’re gonna, you know, it’s interesting, the, the watch, watch CNN or watch MSNBC where McDonnell Douglas comes on or whatever. And you’re gonna, why are they advertising? Why is that being advertising? Am I gonna go buy a, a F 35 or maybe a, a launcher for a missile launcher? They’re doing it so these, these folks will jump behind the war effort. You know, they’ll, they’ll give, ’em a call. You know, we’re really, it’s, it’s important we do this story. How many more generals do you think we’re gonna see on TV that are war hawks wanting to get us in not just, not just, Russia, Yemen, and, and China, anywhere they can start a fight, man, that’s big business, isn’t it?

Farron Cousins:                  It, it really is. And we are seeing this fevered pitch happening right now. You know, they’re, they are starting more and more to include China in this and, you know, you talk about these commercials. Think about it too. You also have those big commercials from GE where they’re building the jet engines there. And why are you advertising that on CNN? We’re not buying jet engines from you. Well, they know that. They’re buying loyalty from the networks. You’re not gonna go out there and criticize these companies who are all on record right here, talking about wanting to push for basically global destabilization, because it’s good for profits.

Mike Papantonio:             Well, we’ve got a $750 billion Pentagon budget. They gotta spend it somewhere. And you know what really is the, the most aggravating thing to me is these aren’t their kids. It’s not their daughter or their son or their father or wife that are going off to get killed. It’s somebody else. So this is easy for CNN and MSNBC. CNN has to do this. You realize there, the last numbers I saw were somewhere between 500 and 600,000 viewers in prime time. Now, what do you do about that? Well, it’s like, you know, it’s like Pulitzer thought about, start a war, you know, gin up a war. War is always good for the media and all of these folks that are just, they don’t watch anything but MSNBC, they don’t watch anything but CNN because of their politics or Fox news, because that’s their politics. They see this day and night, we have to go to war. You know, so, so you got Yemen. This is the choices. This is kind of the, the choices where these war, war pigs. I hate to even be war hawks. They’re war pigs. Yemen, North Korea, China, Russia. I mean, they got this, they they’ve got this great, they’ve got this great choice list here. We can start a war somewhere, can’t we?

Farron Cousins:                  Right. And what’s interesting too here. Recently, you had Northrop Grumman CEO, Kathy Warden, who comes out there and says, you know, we expect to continue in those businesses, talking about defense contracting, because we believe that they actually promote global human rights per, proliferation, not contrary. So she thinks we’re out there pushing these weapons because it’s for human rights.

Farron Cousins:                  We’re doing this out of the goodness of our heart, she says, because we care about people so much that we want to kill them and make money off killing ’em.

Mike Papantonio:             Well, actually, they’re bragging. You understand these folks are actually bragging in the, in the money circles. They’re bragging, hey, we see a lot of opportunity. Those are the words that are using. We see opportunity here for your shares to grow. How sick does it get? I mean, really?