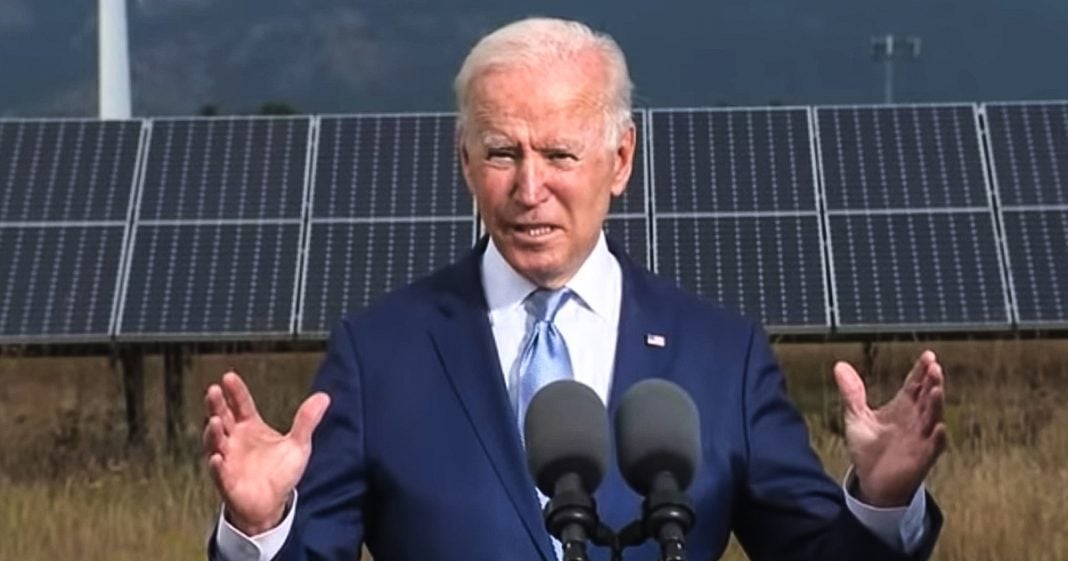 Via America’s Lawyer: President Biden has been quietly approving oil and gas drilling permits at breakneck speed – even outpacing former President Trump. RT’s Brigida Santos joins Mike Papantonio to report on hundreds of environmental groups that are petitioning his administration for backpedaling on its promise to stop auctioning off federal lands to the highest bidder.

Mike Papantonio:             In his first year as president, Joe Biden has approved oil and gas drilling permits on federal land at nearly doubled the rate that Donald Trump allowed. Brigida Santos joins me now to talk about this story. Brigida, how many, the numbers are staggering, how many oil and gas permits has Biden approved since he’s taken over the White House?

Brigida Santos:                   Well, new data released by the bureau of land management shows that the Biden administration has approved 3,557 permits for oil and gas drilling on public lands during its first year. Now in comparison, Donald Trump approved 2,658 permits during his first year as president. Now, early in his term, Biden did issue an executive order calling to pause all oil and gas leases on federal lands. But a federal judge struck the order down and ordered delayed lease sales to continue for the Gulf of Mexico. So the Biden administration then proceeded to hold the largest auction of oil and gas drilling leases in Gulf history, opening up more than 80 million acres for fossil fuel extraction, claiming that its hands were tied. But a memo filed by the justice department says that the judges ruling did not force the government to auction off drilling rights to the Gulf. So basically Biden could have done more to get out of the historic sale. Instead, the deal is going to further contribute to climate change. According to the US geological survey, 25% of US greenhouse gas emissions come from fossil fuel extractions on public lands.

Mike Papantonio:             You know, the most infuriating part of this story is after the judge rules Biden then comes out and says, well, I can’t do anything about it. I have to follow the judge’s order. That is the most ridiculous argument. He could have slowed this down for years. Instead, he goes completely contrary to what his promise is about being an environmentalist, completely contrary to his promise about fossil fuel. And, and you just gotta wonder how are environmentalist responding to this permit approval when they voted for him, because he was gonna do so much better on fossil fuel? And, and he, Trump does better than him by about a thousand different permits. I, I, I don’t know how to get my arms around this other than to say it’s just absolute political fraud. What’s your take?

Brigida Santos:                   Yeah. In response, more than 360 climate conservation, environmental and indigenous groups have petitioned to the Biden administration calling on the president to draft an executive order to phase out oil and gas production on federal lands by 2035. As you just said, during the presidential debates Biden’s stated campaign position was to ban new oil drilling on federal lands and new fracking. He’s also consistently claimed that tackling climate change is one of his top priorities. But to date, his administration still has not secured climate initiatives to back that up.

Mike Papantonio:             Well, I mean, at some point the, you know, of course his, his numbers are in the tank right now. This kind of story doesn’t help his numbers anymore because even, even the very people who are trying to show such a difference between Biden and, and, and Trump now look like idiots because Biden is doing just the opposite of all the promises that he made. Democrats are running out of time to deliver climate change now that the original Build Back Better America act is dead. Is there any progress on climate initiatives at all?

Brigida Santos:                   President Biden says he supports breaking up the Build Back Better package. The original bill outlined climate measures, clean energy tax credits and fees for methane emissions among other things and since the original bill failed, Biden is now focused on passing over 500 billion worth of tax credits and incentives to address climate change. Most of that money would reportedly go towards installing solar power, making buildings more energy efficient, electric vehicle infrastructure and manufacturing wind turbines. Now these measures could reduce greenhouse gas emissions, but of course it remains to be seen whether Congress is actually going to agree on passing sweeping climate legislation. And so far, I don’t see anything in there about continuing to drill on federal lands.

Mike Papantonio:             Well, everybody agrees, you have to start with fossil fuel and right now Biden has made a circus out of that. It’s a total utter joke. Brigida, thank you for joining me. Okay.