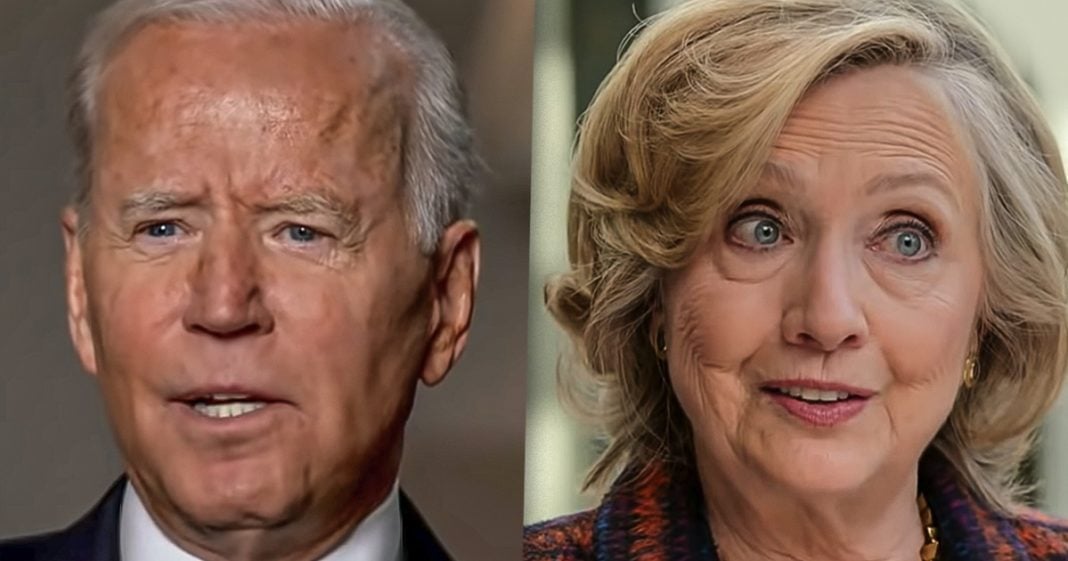 Via America’s Lawyer: President Biden’s approval rating continues to nosedive, prompting some analysts to predict Hillary Clinton could return in 2024 if the midterms don’t pan out for the Democrats. Mike Papantonio & Farron Cousins discuss more.

Mike Papantonio:             President Biden’s approval ratings have gotten so bad that establishment Democrats are now pushing for Hillary to run again, my God, in 2024. I’m not, I’m not making it up. Okay. Why don’t you take it, why don’t you take the story from there.

Farron Cousins:                  Well, Biden is looking at, you know, the latest poll came out, which is even lower than Donald Trump was at this point in his presidency. You know, he was historically unpopular. Biden came along and said, hang on. I can beat that. So we are looking at an absolute dismal presidency. In fact, Kamala Harris is actually now higher than Biden. That’s how far he has fallen in just the last month and it’s all sorts of things, not just all sorts, it’s everything. The handling of the pandemic, inflation, the economy, jobs, across the board people say, I have no faith in this man. And so Democrats are in full blown panic, especially with midterms thinking, what the hell are we gonna do with this guy?

Mike Papantonio:             Okay. The Republicans though are so stupid sometimes.

Farron Cousins:                  Yeah. People for forget, you know, Hillary Clinton won that Senate seat in the state of New York where she was not from, had been living in Arkansas for decades before she went to the White House. Realizes if I want to have a political career, I’ve gotta go somewhere that’s a deep blue state. So they moved the family to New York and that’s the only way she was able to win. She would not have won a Senate seat in Arkansas of all places.

Mike Papantonio:             Yeah. Yeah. And now these stories are already surfacing because she’s making it clear she’s gonna run. The story, the story that surfaced I think a couple days ago was where the Epstein group tried to whitewash the Bill Clinton connections.

Farron Cousins:                  They, they made people sign documents saying, you need to sign this saying you never saw Bill Clinton at, what was it, Little St. Thomas was the name.

Mike Papantonio:             Okay. That’s significant because Hillary has already made it clear that she wants to run. My prediction is the Republicans want her to run. They absolutely want her to run. They think she’s beatable. All they have to do is look historically. Now we’re gonna, we’re gonna get the emails, you idiots, she had 3 million dollar, 3 million votes ahead in the last election. It ain’t about it. It’s about, it’s about simple numbers. Where it comes to electoral college, she cannot win in the electoral college. The woman has a personality problem that somehow she just can’t overcome.