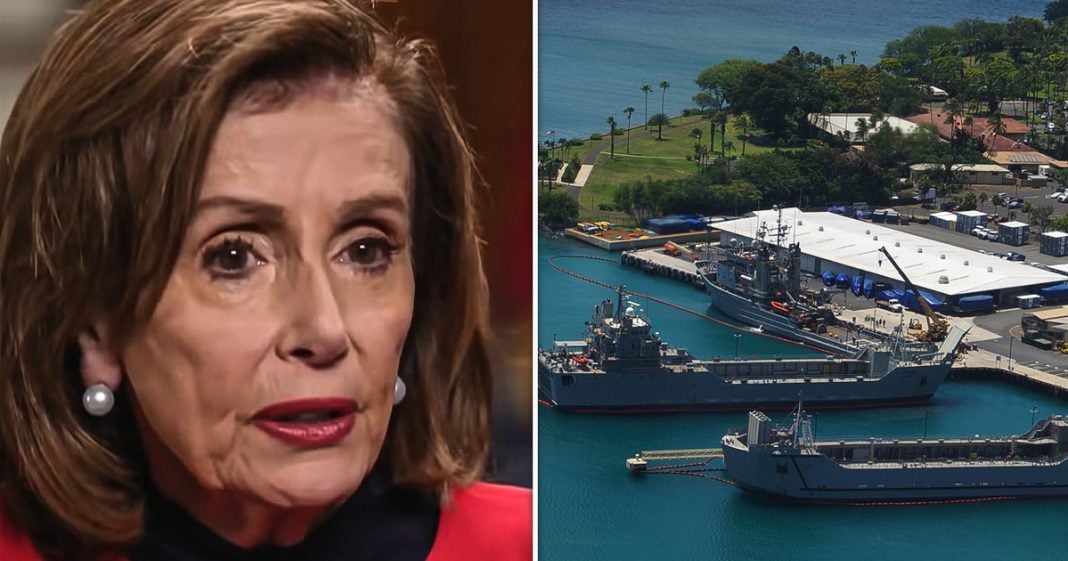 Via America’s Lawyer: Nancy Pelosi is among more than 50 members of Congress who violated the STOCK Act, which was meant to stop lawmakers from fattening their pockets via insider trading. Mike Papantonio & Farron Cousins discuss more. Plus, thousands of military families in Hawaii were endangered by toxic drinking water that was tainted by jet fuel leaking from Pearl Harbor. Mike Papantonio is joined by attorney Joshua Harris to explain how the US Navy is now being forced to play cleanup.

Mike Papantonio:             Nancy Pelosi doesn’t think there’s anything wrong with members of Congress trading stocks, but the public disagrees strongly with her position. New legislation could put an end to this and Farron Cousins from trial lawyer magazine joins me to talk about what’s going on. Look, there’s no other way to say it. This is in, this is insider trading that’s been blessed by Congress. You see story after story, Congress, congressmen or Congresswoman moves into Congress, they have nothing, they’re poppers when they start out and within eight years, they’re millions of dollars wealthier. A lot of it has to do with insider trading, doesn’t it?

Farron Cousins:                  It, it, it really does. And look, this is one of the few issues where this truly is a both sides issue. You’ve got your Republicans, you’ve got your Democrats doing it in the last year alone, 52 lawmakers from the House and Senate, along with 182 of their staffers popped for this. And when I say popped, I mean, absolutely nothing happened. It was just confirmed that these individuals were trading stocks on issues that were currently in front of Congress, which is, as you pointed out, insider trading.

Mike Papantonio:             We’ve, you know, we deserve this. Look, here’s what they do. They have inside information about new legislation, new laws that are gonna take place. They have inside information about what the military’s about to do. What’s being done with the environment. What’s being done with the FED on money rates, those types of things. They have all of that inside information. And according Nancy Pelosi, the millions that she has made and her, her husband has made, the millions they have made as insider trading is perfectly fine. Other people, well, we throw them in jail, don’t we?

Farron Cousins:                  Right. And, and the rate of return that these members of Congress are getting on these stocks is absolutely through the roof. You know, when you look at the S&P average rate of return, you know, five something percent, I believe it is, well members of Congress because of their knowledge are getting more than 14% returns on their investments here. But, you know, there, there’s good news on the horizon, maybe. You do have Jon Ossoff from Georgia Democratic Senator who’s introduced legislation says, listen, I know you’re saying in this Pelosi, but we’ve gotta do something. 76% of the public says they want us to stop doing this. Let’s deliver. And Ossoff is the guy, let’s not forget, he won his Senate seat because the two Republicans in that race were both accused of very serious insider trading.

Mike Papantonio:             Nancy Pelosi is a, it’s a pathetic, she’s a pathetic dinosaur. And the Democrats can’t seem to get their arms around that. The more she comes out now, now you’ve got McCarthy who’s of course probably gonna be the next House and, you know, in charge of the House, he’s attacking her. He’s saying how stupid to tell the American public that your insider trading is completely legitimate. That the tens of millions, tens of millions follow these stories, tens of millions that her husband has made, and that she has made by nothing less than insider trading is just, just okay.

Farron Cousins:                  Well, and if you wanna know why we’re not getting any action on things like breaking up these tech monopolies, look at the stocks they owned, Google, Alphabet, Facebook, Netflix. All of these big tech giants and these members of Congress, Pelosi specifically and her husband, are buying and selling these stocks because they know, look, as long as we don’t do anything, the stocks are gonna keep going up.

Mike Papantonio:             It’s been a couple of months since a massive jet fuel leak contaminated the drinking water, thousands of military families in Hawaii. Now the Navy’s being tasked with cleaning up this disaster. I have Joshua, Joshua Harris with me to talk about it. Josh, this story has repeated itself so many times, hasn’t it? With the military, it’s either contractors for the military or the military that are just completely destroying ecosystems. This is a great example of it, isn’t it?

Joshua Harris:                     And it’s something we see come up over, over time and time again. It’s something that we’re gonna see come up in the future. You just have to understand that when these military installations have these large machines, these jets, these tankers, all sorts of things, they’re powered by fuel and it’s not solar powered. So when that fuel goes somewhere, unfortunately it goes into the ecosystem where there’s homes and communities nearby that are affected by it.

Mike Papantonio:             Well, this is 93,000 people that potentially are affected. Didn’t they always, already have to move about 3000 people away from a highly affected area?

Joshua Harris:                     They, they did. So the, the most recent event was back in November. They believe that there was a fighter jet that had fuel leakage at a Oahu military base and the surrounding communities. They did have to displace almost a hundred thousand people from their homes, because they were detecting petroleum in the water wells at 350 times the levels acceptable for safe drinking water. So those people certainly can’t live there.

Mike Papantonio:             Well, of course, you know the story on benzene, right? You know how dangerous benzene is. What are some of the physical problems that they’re having right now, that they’re, the, the early, the early problems because this is long term, man. If they’ve had exposure drinking benzene, this is serious, this is a serious issue.

Joshua Harris:                     The, it is. Some of the early onset issues are people who are drinking it are getting nausea, headaches, rashes, internal digestive issues. One of the things that we’re seeing inside of the homes are all of the systems inside the homes that use water, the dishwashers, the washing machines, the coffee pots, the plates, all of those things are being ruined and continuing to cause adverse health effects because they’re filtering through that water with petroleum.

Joshua Harris:                     No. What the Navy’s planning to do and they’ve been starting in the efforts is to flush it with about 25 million gallons of water. The, the well system that is, and then the plan after that is to go into the homes and flush out the homes. But with that much level of petroleum in the system, you almost wonder if it’s ever gonna be clean. I mean, these people have been displaced for months at a time over the Thanksgiving, Christmas holidays and having to take the cost of the hotels to, to pay, to be displaced.

Joshua Harris:                     Oh, they’re, they’re outrage. I mean, there was a class action lawsuit filed at the end of December that they’re trying to hold these management companies accountable because they’re not doing what they need.

Joshua Harris:                     So one of the issues is that active service men and women and their spouses are typically not allowed to sue the Navy. It’s something that’s employed in their contract and they can’t sue ’em during the line of their duty and the undertaking of their duties in the military. There’s a small exception for dependence of those folks though. So we may see some litigation with that. But what the service men and women are doing now are going after the management companies and affiliated companies because they’ve breached their warrants of habitability, meaning that the homes that these people contracted to stay in and live in, they’re not livable. This water’s not safe.

Mike Papantonio:             Well, isn’t the bigger problem how do you, okay, you, you you’ve had this contaminant in your drinking water, you’re bathed in it, everything, cooked with it. And now you run the risk of all types of neurological disease, cancers, gastrointestinal disease beyond belief. It seems like they have to be monitored. Has there been any talk about the military saying, well, we’ll have a monitoring system. You can come in and we’ll check you out every couple of years to see how you’re doing. Is there been any discussion about that?

Joshua Harris:                     Not yet. You, you would hope they would do the right thing for the service men and women who are doing so much for the country to make sure that they’re being protected going forward, because this is catastrophic. I mean, you know, hopefully people aren’t affected by it long term, but with this much contamination, you can almost expect to see it.

Mike Papantonio:             Well, the, they’re residents beyond the military though. This is, is this moving, it’s moving into the aquifer, isn’t it? I mean.

Joshua Harris:                     It is. It’s going into the underlying communities. So we expect some of those people may bring litigation against the, the federal government and the Navy for this contamination. So I would expect through one of the class actions or more that they’re gonna set up some monitoring so that people down the road can get the assistance they need, because this, this isn’t over with a rash or skin peeling. This is gonna have long term side effects.

Joshua Harris:                     The, well, they believe that there was a, a jet fuel that spilled out during a, a simulation or a practice run and then just, it wasn’t properly cleaned up in time. So that’s when it started seeping and that was the most recent event in November of 2021.

Mike Papantonio:             Yeah. These people need to be medically monitored for a very long time because the, the chances of benzene, the, the, the effects of benzene and toluene and some of the things involved here are terrible.