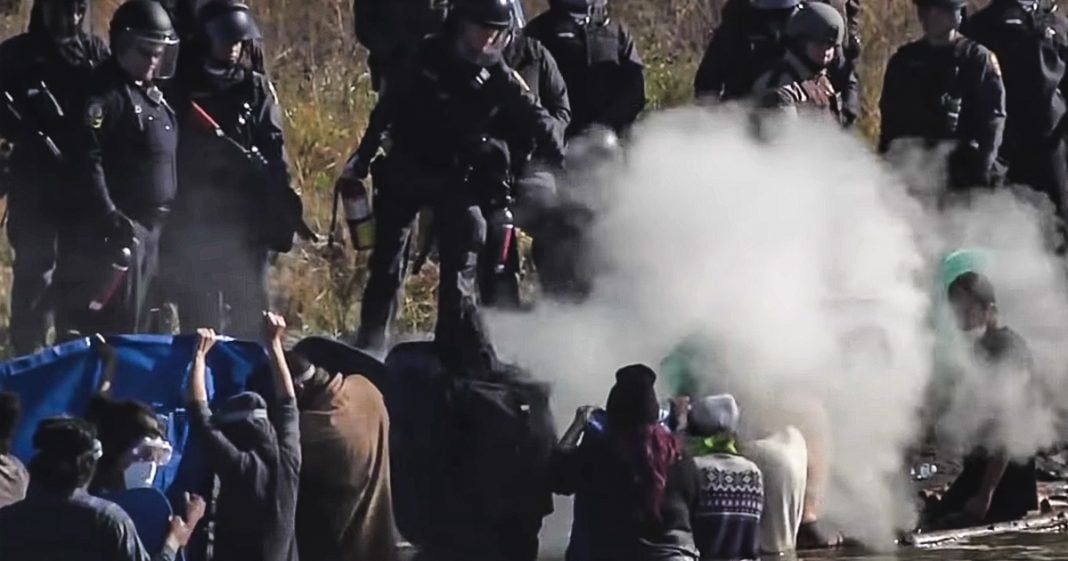 Via America’s Lawyer: A judge orders the energy company behind the Dakota Access Pipeline to publicly disclose their use of private security groups against protesters. Mike Papantonio & Farron Cousins discuss more.

Mike Papantonio:             Finally tonight, some good news. A judge ruled last week that the company behind the Dakota Access Pipeline can’t keep their use of private security secret. The things that they’ve done with their private security groups. They’ve gotten tons of information about people who simply want to say, we want clean water. We don’t want this pipeline to destroy our entire ecosystem. We don’t want it to destroy our entire waterways, our subterranean waterways. I, I love, I love this decision.

Farron Cousins:                  I, I, I think it’s absolutely very important because we know and unfortunately last week too, a judge dismissed a lot of the police brutality claims by the protesters. But TigerSwan was also a part of this and TigerSwan is the company hired by Energy Transfer Partners who owns the Dakota Access Pipeline and what they were doing according to their own, you know, documents is they wanted to treat these protesters, people who wanted to protect the environment, they wanted to use what they called counter insurgency measures. Basically treat them as if.

Mike Papantonio:             Well it’s being, this was led by a former commander of the Delta Force, TigerSwan was, and he put into place the same things that they would be for containment for just street terrorists, potential, potential terrorism movements taking place in the street. How do you shut it down before it gets outta control? And so, so what ends up happening is the argument is that these are public records. You know, you can’t protect them. As a matter of fact, they gave these records to a public entity and the public entity says, we have them now. You can’t have them back, right?

Farron Cousins:                  Yeah. And so TigerSwan is probably not gonna be in legal trouble, I would say, you know, unfortunately the, the judges in this country are so skewed against any kind of environmental issue that we see these protestors, these activists constantly losing in court. But TigerSwan has been exposed and sometimes that it’s the best you can hope for. That’s the best that you can get out of a story like this. And hopefully going forward too, these people who, who endured what they described as torture, remember they were sprayed with water hoses in sub-freezing temperatures.

Mike Papantonio:             God, they have rocks thrown at them, they had bullets flying over their head.

Farron Cousins:                  That was being carried out against people because they wanted to protect our water.

Mike Papantonio:             Well, like I said, the guy running the company was commander in Delta Force. So he said, well, we can do this to civilians too.

Mike Papantonio:             That’s all for tonight. Find us on Twitter and on Facebook @facebook.com/rtamericaslawyer. You can also stream us live on YouTube, and be sure to check out RT’s new portable app, where you can watch all your favorite shows. I’m Mike Papantonio and this is America’s Lawyer where every week we tell you the stories that corporate media is ordered not to tell because their advertisers won’t let them and because their political involvement doesn’t allow to for it. Have a great night.