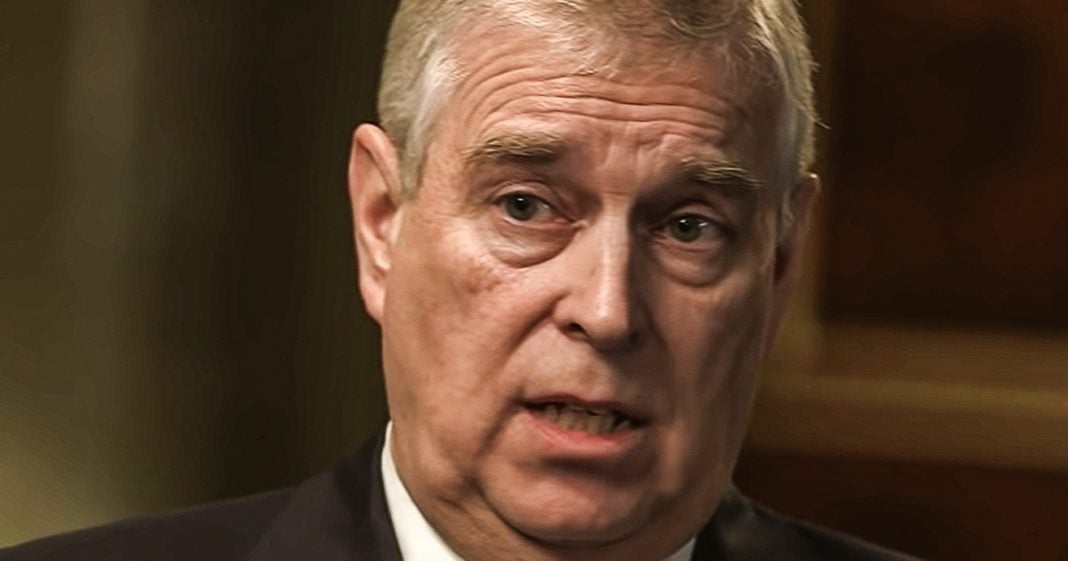 Via In Question: Prince Andrew now faces a trial in the US over a sexual abuse lawsuit. This comes after a federal judge in New York dismissed his request to get the lawsuit thrown out. So what will happen next? Attorney Madeline Pendley joins In Question to weigh in.

Natasha Sweatte:            Prince Andrew now faces a trial in the US over a sexual abuse lawsuit. This comes after a federal judge in New York dismissed his request to get the lawsuit thrown out. It was filed in August of last year by a woman who claimed she was raped by the Duke of York when she was a teenager. Well, she alleged that disgraced financier, Jeffrey Epstein and recently convicted sex trafficker Ghislaine Maxwell forced her into having intercourse with Prince Andrew. And because of the judges ruling, the lawsuit against Prince Andrew can now move forward. So what will happen next more? For more, let’s bring in Madeline Pendley who is an attorney, thanks so much for joining us, Madeline.

Natasha Sweatte:            So it’s interesting. This US district judge who gave the green light for this lawsuit to move forward wrote in an opinion that Andrew’s lawyers failed to successfully challenge the constitutionality of the lawsuit failed in Virginia. So what’s your reaction to this?

Madeline Pendley:        Essentially, I’m not surprised. So Prince Andrew’s argument was that New York’s law, which is called the child victims act that extends the statute of limitations for child sex abuse claims was unconstitutional because it was vague, essentially violating his due process rights. It, it’s not vague. His argument was because it allows people to sue who were less than 18 years when the abuse occurred, it’s confusing because the age of consent in New York is 17. The plaintiff Virginia was 17 when the abuse occurred. So he says she falls under this confusing window. In my opinion, this argument is meritless and the judge did the right thing by allowing the case to continue.

Natasha Sweatte:            Interesting. And what are your thoughts on Andrew’s attorneys saying that this lawsuit lacked specificity and initially being disqualified by a deal that she reached back in 2009 with lawyers for Jeffrey Epstein?

Madeline Pendley:        So as far as the lack of specificity argument, this is a pretty typical defense move. So 9 times outta 10, before they even answer the complaint that’s filed against them, most defendants will move to dismiss the complaint on grounds like this, that it’s vague, it’s not specific enough and so on, these administrative issues. So that’s pretty straightforward. The settle agreement argument though, I think is a good move by them. I do think there are two main problems with this argument. The first being everybody involved with the settlement agreement agreed that Prince Andrew was not named in the settlement, he was not involved in creating the settlement agreement and he did not know it existed at the time it was created. So they, the plaintiffs have a pretty good argument that this agreement doesn’t apply to Prince Andrew.

But the second thing, perhaps the better argument, while the settlement does say it releases claims against other potential defendants, the settlement agreement addressed a case that was filed specifically in Florida. And so Prince Andrew is not now and would not have been subject to Florida’s jurisdiction at the time of the agreement. And there’s no allegations against him in this case, that would subject him to Florida jurisdiction. Again, there’s no allegations of abuse that occurred in Florida. So he’s really not a potential defendant that this settlement agreement may apply to. So I think the plaintiffs have some strong arguments to get around that.

Natasha Sweatte:            Okay. And so the Buckingham Palace said that it would not comment on the ongoing legal matter. Do you see their attorneys speaking out anytime soon?

Madeline Pendley:        I don’t. So they’ve yet to speak out on much. When the attorneys do comment, they adamantly deny the allegations and claim that the plaintiff is really just in this for the money. And honestly, I don’t blame them for not saying anything because when they let at least Andrew try to rebut some of these allegations on his own, he does a horrible job. He first said he never met the Virginia, even though there’s the picture of them together. Virginia specifically says that she and Andrew, you know, went to a nightclub and she was trafficked afterwards. And she mentions a specific allegation that Andrew, you know, sweated all over her. His response to that is that he can’t sweat. He has no proof of that at all, but he says it can’t be me because I can’t sweat. You know, he has these bizarre rebuttals to her allegations. So if I were his counsel, I would not be saying much about this either.

Natasha Sweatte:            Wow. That’s very interesting points that he tried to make. So now the Prince has denied allegations, as you said, of sexually abusing this victim. So at the time would’ve been 17. But aren’t these types of cases harder to prove as it can sometimes be, you know, as opposed to the victim’s word against an alleged perpetrator?

Madeline Pendley:        They absolutely can be difficult to prove. And, and in this case and others, the passage of time makes it more difficult as well. And the many of these, in many of these scenarios, the girls are given drugs or alcohol by their trafficker, which compromises their memory further. However, with this particular case, the public seems to be on board with the idea that Epstein trafficked minors, generally. We just saw that his partner Ghislaine Maxwell was convicted of trafficking minors as well. And it also seems well established that Epstein and Prince Andrew were friends. So at least Virginia and her team have that as a starting point, you know, to demonstrate that she was trafficked at some point, because the main hurdle will be, was she trafficked to Andrew specifically, but like I said, I don’t think they will have a problem getting a jury to believe that she was trafficked by Epstein in general, which is often the most hardest part to prove about these cases.

Natasha Sweatte:            Yeah. And it seems like after the whole, me too movement, these cases are, are kind of maybe treated a little differently.

Madeline Pendley:        Yeah, I hope so. It does seem that people are ready to, to listen and believe women at this point.

Natasha Sweatte:            Madeline Pendley, thank you so much for your time. We really appreciate your insight.