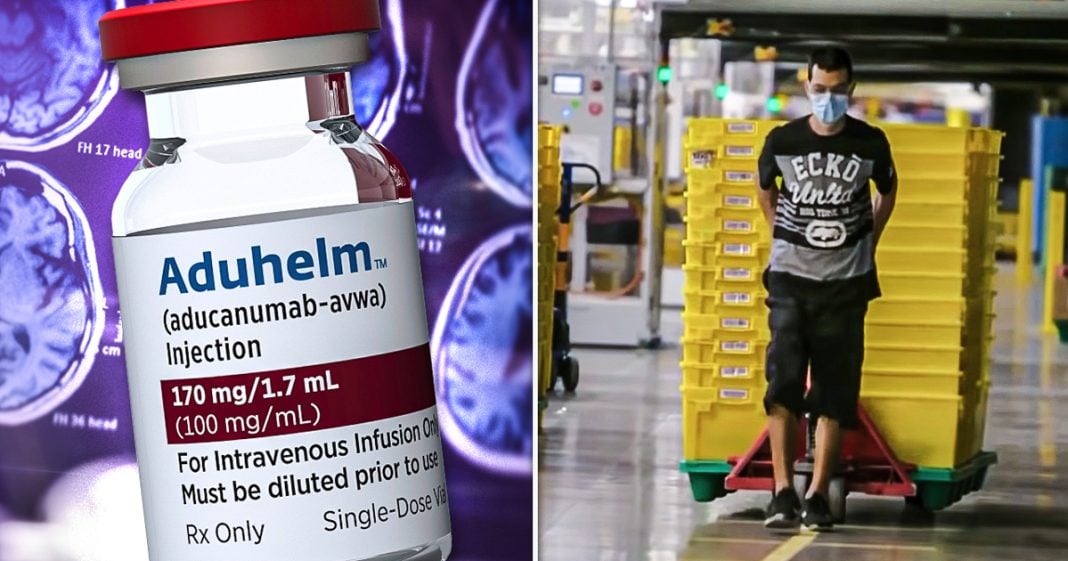 Via America’s Lawyer: Pharmaceutical giant Biogen is in the hot seat as lawmakers investigate concerns of drug safety and possible price gouging related to its Alzheimer’s drug Aduhelm, which may cause fatal brain swelling. Attorney Madeline Pendley joins Mike Papantonio to break down the medication’s questionable approval, despite failure to prove the drug’s efficacy. Also, in a landmark settlement with the National Labor Relations Board, Amazon can no longer interfere with future efforts by its workers to unionize. Mike Papantonio & Farron Cousins discuss more.

Click here to find out more about Aduhelm lawsuits.

Mike Papantonio:             Biogen is in the hot seat as lawmakers investigate concerns over drug safety and possible price gouging related to its Alzheimer’s drug that have already killed users. Attorney Madeline Pendley joins me to talk about it. Maddie, first of all, this is not, this is not the first time with Biogen. They’ve got a really checkered history, but this is just a new story, isn’t it?

Madeline Pendley:        Right. Biogen has a history of developing what’s called niche drugs, you know, used to treat very specific things like Alzheimer’s, like multiple sclerosis, putting it at an incredibly high price point and then not being forthcoming about the adverse event data that’s associated with the drug. They’ve done it with other drugs in the past and they’re doing it here. So Aduhelm is actually to treat Alzheimer’s. But what it does is it clears plaque buildup in the brain, which may or may not have anything to do with the cognitive decline of Alzheimer’s, that’s the first issue here.

Mike Papantonio:             And with the fast track, you don’t really have clinical data to prove that it works.

Madeline Pendley:        It, it’s really frustrating because like you mentioned, it, it was approved under the accelerated approval program, which is supposed to be just as thorough as the traditional approval program. But, here it seems like it’s just a plan B to get this otherwise failing drug pushed through. So a couple things to note. One, in 2019 these manufacturers Biogen and Eisai had to stop clinical tests because they could already see they would not be able to prove that this drug slowed cognitive decline of Alzheimer’s.

Madeline Pendley:        Right. So they stopped it because they didn’t want the actual result. They said, that, that we’ve seen enough. This drug doesn’t work. FDA agreed. For some reason in 2021, Aduhelm gets put back on the table in front of the FDA for review with basically the same information they’ve always had and this time it gets approved.

Mike Papantonio:             And they work for the, mostly for the pharmaceutical industry. The FDA doesn’t work, I don’t know why people have this in their head.

Mike Papantonio:             That the FDA protects them. But here, okay. So what, what’s really bothersome is they say, no, we don’t have any clinical showing.

Mike Papantonio:             There’s no clinical showing that it works. But we have a guess and the guess is that if we remove the plaques from the brain, it’s going to cure the problem. Isn’t that what they’re saying here?

Madeline Pendley:        It, it is. And like you said, there’s not enough data to show that that’s the case. So what’s happening is elderly people are being put on the medication in the hope that it will one, clear plaques from the brain. We don’t even even know that it does that. And two, if it does, that they will, their Alzheimer’s symptoms will be reduced. So they’re using these older people as Guinea pigs and what’s happening is they’re suffering from brain bleeding, brain swelling and they’re dying. So, so a couple things that have been going on in getting this drug approved is the FDA actually made it easier to get the drug pushed through. The original question was, does this decrease cognitive decline? No. So they changed the question to just, does it reduce plaques? But I think the, the main question is why did they do that? And they’re actually being investigated by Congress right now, both Biogen and the FDA.

Mike Papantonio:             And, and, and so the, the people who were, some of the folks that were doing the review, my memory is they actually resigned from the committee because they said that this is such a bunch of BS.

Madeline Pendley:        They said, this is the worst drug approval in US history, Aduhelm. And so interestingly, because the drug was priced so high at $56,000 a year when it first came out, thankfully not many people have taken it. But two things to be watching for is the drug to be covered by Medicare so it opens it up to more patients. And also we’ll be watching for a second attempt at Medicare fraud by Biogen, as they’ve done it in the past, very similar, Pap.

Mike Papantonio:             So now the company now wants to say, well, let’s let Medicaid and Medicare pay for this.

Mike Papantonio:             And taxpayers have to pay for something that has been shown not to work. And oh, by the way, it’ll kill the patient.

Madeline Pendley:        If covered by Medicare next year and the amount of people take it that we think are gonna take it, it will cost Medicare between 29 and $37 billion next year alone, just for Aduhelm.

Mike Papantonio:             We’re gonna remove the plaque and then that’s gonna cure the disease or slow it down. Most of the time you have to say, we know this.

Mike Papantonio:             Because we tested it clinically in little clinical steps over a long period of time.

Madeline Pendley:        No, what they did is they did the accelerated approval, allowed them to put the drug on the market and now they’re supposed to be conducting clinical tests in the hopes that it will support what the drug is already on the market for.

Mike Papantonio:             But the clinical tests are, are being done by, by elderly who are becoming guinea pigs. I mean.

Mike Papantonio:             Rather than using the regular clinicals process, we now have all these old folks who have Alzheimer’s disease that we can experiment on.

Mike Papantonio:             Maddie, I hope you’ll go after ’em and have some impact on stopping some of this. Thank you for joining me.

Mike Papantonio:             And finally tonight, some good news. The Department of Labor has reached a deal with Amazon that’s gonna prevent the corporate giant from interfering in workers unionization efforts. Farron Cousins joins me to talk about it. We, we just finished a story on this a couple of weeks ago, where we saw Amazon just bottom-feeding kind of conduct. The ugliest of ugliest, where it came to union busting. So this is a positive story.

Farron Cousins:                  Right. And I think Amazon at this point was left with really no choice, but to go ahead and agree to these terms from the NLRB. You’ve got the United brotherhood of Teamsters that came out recently and said, hey, Amazon employees, we’re willing to represent you. Why don’t you come and be a part of this? So Amazon with 750,000 employees here in the US alone, we could be looking at a mass unionization effort if, of course, this NLRB ruling is enforced and, you know, that’s something we always have to worry about.

Mike Papantonio:             That’s always the problem. I mean, you can get these rulings from the labor, from labor and it can be very clear. This is, this is the rules. You can’t do these things that you did last time, Amazon, and we know what they did. They knew they were breaking the rules. They clearly understood it, but they know the statistics. If you go back for a second vote, probably the corporation is gonna win on the second vote.

Farron Cousins:                  But, you know, they are suffering right now. Amazon is a victim of, of, you know, the, the great resignation, which is happening for these lower wage, wage jobs across the country. But they also see what’s happening in these other sectors. Right.

Mike Papantonio:             That’s all for tonight. Find us on Twitter and Facebook @facebook.com/rtamericaslawyer. You can also stream us live on YouTube and be sure to check out RT’s new portable app where you can watch all your favorite shows. I’m Mike Papantonio and this is America’s Lawyer where every week we tell you the stories that corporate media’s ordered not to tell because their advertisers won’t let ’em and because their political involvement doesn’t allow for it. Have a great night.