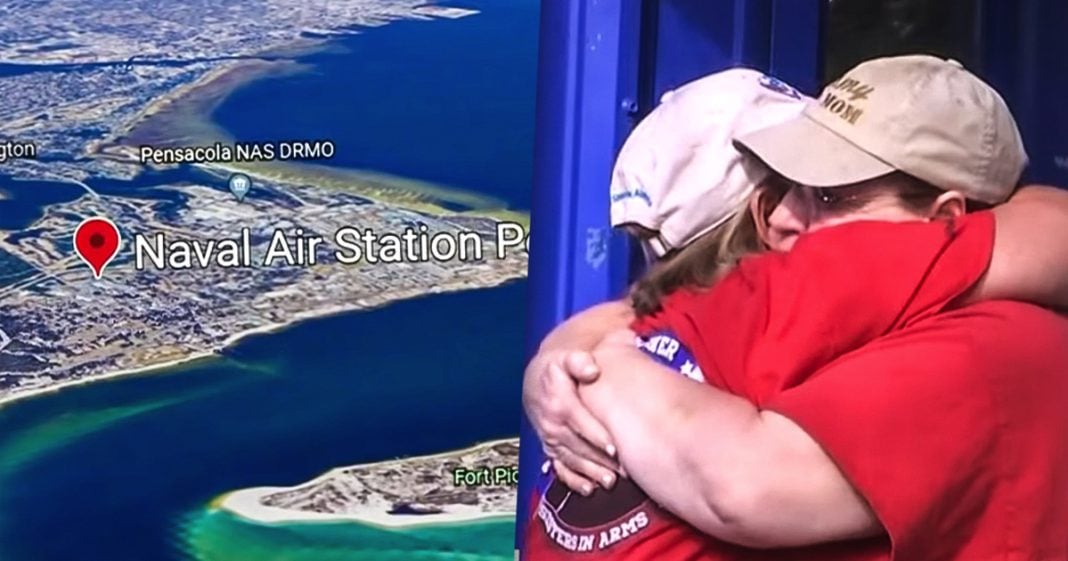 Via America’s Lawyer: It’s been two years since a deadly terrorist attack at a naval base in Pensacola, FL claimed the lives of three service members and injured multiple others. Filling in for Mike Papantonio this week, Farron Cousins is joined by attorney Chris Paulos to give an update on litigation by families of those victims against Saudi Arabia, alleging the Kingdom ignored multiple red flags and ultimately did nothing to stop the attack.

Farron Cousins:                  It’s been two years since a deadly terrorist attack right here in Pensacola claimed the lives of three service members and injured multiple others. Families of those victims are now suing Saudi Arabia alleging that the kingdom ignored multiple red flags and ultimately did nothing to stop the attack. Attorney Chris Paulos joins me now to talk about this. Now, Chris, you’ve been one of the premier lawyers working on this case here and just real quick to kind of rehash what happened, you know, tell us about the attack itself.

Chris Paulos:                        Well, on December 6th, 2019, second Lieutenant Alshamrani, a flight student here at NAS Pensacola and a, a officer in the Saudi Royal air force, entered building 633 on a fortified military base with high capacity magazines and a Glock handgun and proceeded to shoot fellow soldiers and officers that were in that building, and injuring and killing up to 13 people on that fateful morning. I represent the first responders who were there, who engaged second Lieutenant Alshamrani and ultimately neutralized the threat, but were in doing so, were also shot and injured themselves. And it’s been a devastating, devastating attack in Pensacola and on our military. It was the first Al-Qaeda terrorist attack on US soil since 9/11.

Farron Cousins:                  And so that’s the point, you know, that, that’s where we’re getting to in the lawsuit here is this individual, the one who carried out the shooting is alleged to have been radicalized by Al-Qaeda and there were plenty of warnings. I, I mean, based on just what I’m reading, you know, for, even from ABC news, they say he had told other people on the base, you know, his fellow Saudi Arabian, you know, members, I’m going to do this. But rather than alert somebody, they just called in sick the day of the shooting is what I’ve read. I mean, is that, what do we know?

Chris Paulos:                        So, yeah, I mean, we’re still learning a lot, but we do quite a bit. And the, you know, the government itself and attorney general Barr at the time came out and said that this was a terrorist attack. We know for a fact that Alshamrani had joined and pledged baiyah loyalty to Al-Qaeda prior to ever joining the Saudi military. When he joined the Saudi military, he told family and friends that he was on a special mission. He then moved quickly through the ranks and was hand selected by the Saudi government to come here to the United States to participate in flight training with the US Navy. We know that he purchased a handgun and kept handgun in large amounts of ammunition in his barracks that should have been routinely inspected by his superior Saudi officers. And we also know that the night before the, the attack and the murders that he hosted a dinner party with his fellow Saudi officers at which they were watching videos online of other rampages and killings.

The signs were all there and the knowledge by Saudi Arabia had to have been there. They were under a duty to understand what their, their, their flight students were doing here, to have fully vetted them prior to joining the military and certainly before sending them over here to the United States. There’s no fathomable way that they weren’t aware of what his intentions were and what his capabilities were. And he was publicly posting on his Twitter feed throughout his time in the Saudi military, anti-American, anti-Israel, anti-Western rhetoric. He was retweeting Al-Qaeda clerics, clerics that are followed by Al-Qaeda. So the, the signs were there and it’s clear that Saudi Arabia totally failed their duty to, to select appropriate candidates for, for flight training and to do anything about the extremism, the extremism that’s percolating through the ranks of their own military.

Farron Cousins:                  And, and so there’s also another weird piece of this puzzle here with the lawsuit itself. The service to the Saudi government. You and I have actually spoken off camera about this. So tell everybody, because, cause this is a very weird story. The lawsuit just, just sat there for quite some time.

Chris Paulos:                        So, you know, part of the, part of the process of, of initiating a lawsuit against a, a foreign country is to serve them appropriately through the proper channels. If you do not follow that, that procedure precisely and to a T you essentially don’t have jurisdiction over that, that country. Saudi Arabia’s lawyers have, have indicated, are aware of the, the lawsuit, their American lawyers are aware of the lawsuit. We’ve asked them to accept service pursuant to the law and they, that they rejected that request. So we’ve been forced to use the department of state to serve Saudi Arabia. Department of state has had this lawsuit in their hands since July and we still have no confirmation that they’ve actually walked that, those documents over to the embassy in Riyadh. It’s, I think even with traffic, about a 10 minute drive. And we know that those document have been in Saudi Arabia since October, still, for some reason, we haven’t been told that they have actually passed this lawsuit onto the appropriate counterparties there in Saudi Arabia.

Farron Cousins:                  We’re, we’re, we’re over two years now, we just passed the two year anniversary of this particular attack. The lawsuit, you know, was official, I guess, as of February. They’ve had it since July, definitely had it since October, 10 minutes down the road. This, this is absolutely a failure of, of the state department, I believe as well. You know, you don’t have to say that, but I, I, I think it is a failure of them. But most importantly, these channels that we have go through, as you said, they are so important. So hands are almost tied, you know, we, we can put pressure. We, we can do what we can, but can’t step out of that line for fear of losing the jurisdiction over this lawsuit. Is that correct?

Chris Paulos:                        Well, that’s correct. I mean, we are following the law as precisely as we can, and we are, we’re ready to proceed with the lawsuit we have been since the day that we filed it. And so we’re expecting the department of state to do what they’re statutorily required to do to serve these documents. At this point there really is no excuse for the delay. We’ve had better success serving documents to the state department with countries that we have no diplomatic relations with, like Iran, than we have with Saudi Arabia who is a purported ally, a purported close ally, and somebody that we certainly should be communicating with clearly through diplomatic channels.

Farron Cousins:                  That has been exceptionally unfortunate from this administration. Chris Paulos, best of luck with this case. Thank you so much for talking with us.

Farron Cousins:                  And that’s all for tonight. Find us on Twitter and Facebook at facebook.com/rtamericaslawyer. You can also stream us live on YouTube and be sure to check out RT’s portable app, where you can watch all of your favorite shows. I’m Farron Cousins in for Mike Papantonio and this is America’s Lawyer, where every week we tell you the stories that corporate media is ordered not to tell because their advertisers won’t let them. Have a great night.